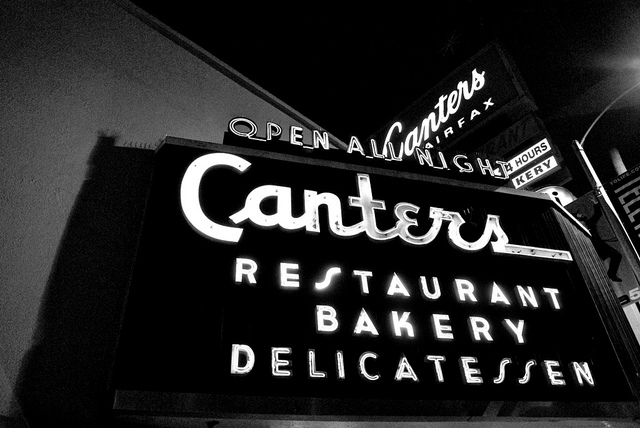 If you drive down Wilshire at 10:01 p.m., it may seem like the whole city has shut down and gone to bed. But, like most everything in Los Angeles, appearances are deceiving. The city may not be known as one that never sleeps, but between all-night warehouse parties, students cramming for tomorrow's test, early-morning joggers, and even the occasional JPL scientist monitoring activities on Mars, someone somewhere is out and about. So who fuels these nocturnal Angelenos? Where do they congregate? We've compiled a list of our favorite 24-Hour restaurants around to answer these questions, and may we suggest you bookmark this so you're not frantically searching your phone for it at 3:00 a.m. 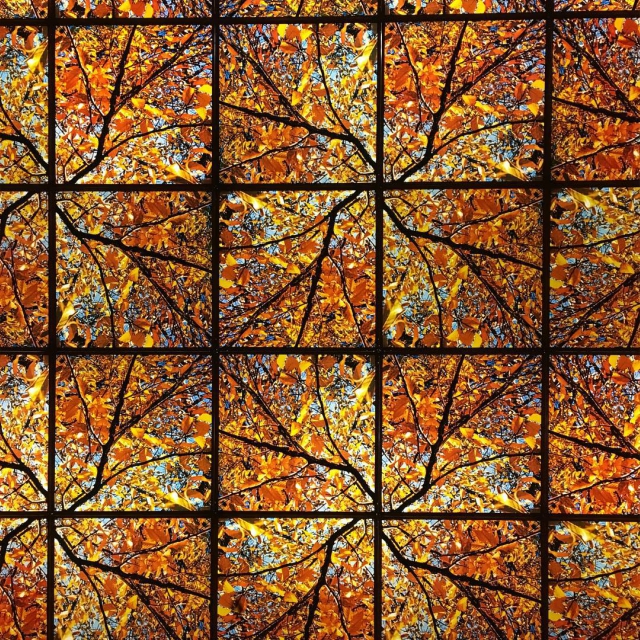 Canter's Deli
As a Jew alone in L.A. on Christmas, take it from me, there’s only one place to go at 2:00 a.m. on December 25: Canter’s. And, yes, even then, the place will be full. Canter’s has been an integral part of Los Angeles nightlife since at least the Topanga Canyon scene of the late 60s/early 70s. It’s the place to go at 2:00 a.m. after the party (or 4:00 a.m. after the after party, or 7:00 a.m. after the whatever-the-hell-that-was). From the iconic autumnal ceiling, to the pitch-perfect deli sandwiches and matzo ball soup, to the epic people watching, it’s never (re: never) a bad idea to go to Canter’s. — Oren Peleg 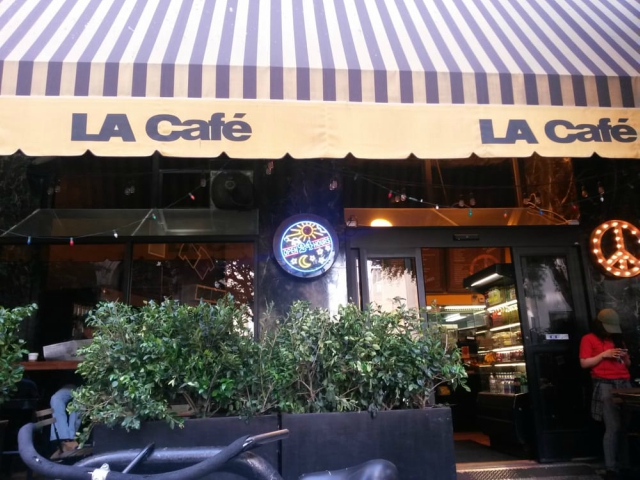 LA Cafe
Even if you’ve never eaten there, you’ve seen LA Cafe’s yellow Smart Car delivery cars zipping around downtown at all hours. And while, these days, you’re less likely to see insomniac artists brooding over a plate of fries, you’re still sure to see an eclectic mix of partiers settling down for some late-night grub, police officers sipping coffee on break, and various downtown denizens milling about the al fresco tables. Breakfast, burgers, mango and goat cheese salad: check, check, and check at any hour of any day. — Oren Peleg 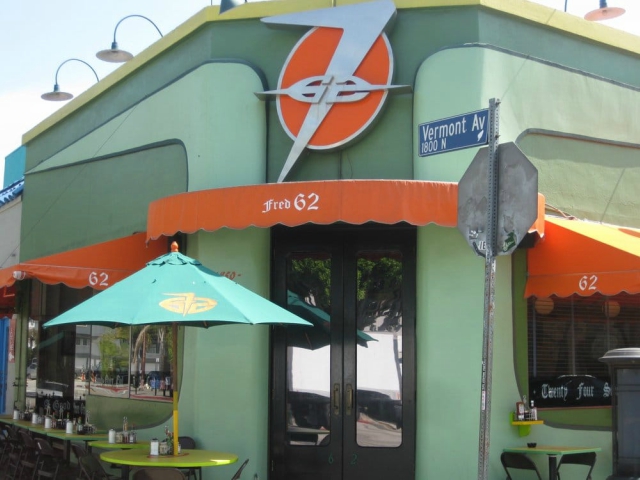 Fred 62
The Los Feliz crowd has been retreating to this 24-hour spot since 1997, which seems appropriate as the decor looks straight out of a Smash Mouth or Lit music video. Stroll (or stumble) into this Vermont Ave. diner before catching a movie at the Los Feliz 3, or after a night at the Dresden or the Greek. Whatever your scene, whatever the hour, take comfort in knowing that Fred 62 will be there for you with a warm plate of eggs, bacon, and hash browns. — Oren Peleg 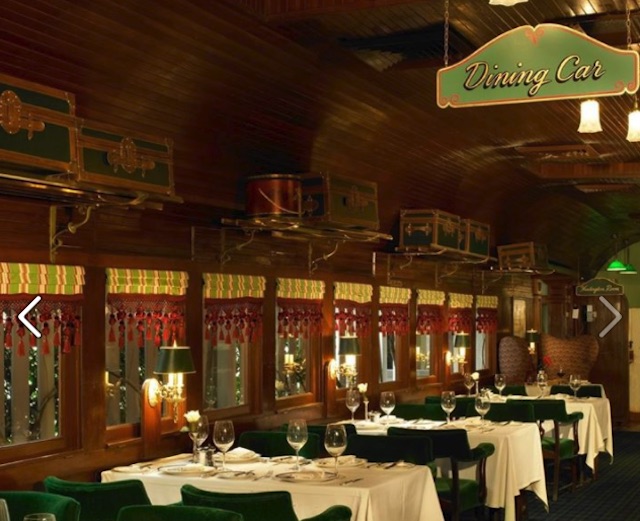 After nearly a century (it opened in 1921), the Pacific Dining Car still feels like an anomaly. It is, after all, gussied up to look like an errant dining car that had been stranded in Westlake (and, what with the ornate wallpaper and green booths, you really do feel like you're rumbling along on the railroad tracks).

Inside, however, it's all about familiarity. Walk in at any given time and you'll find patrons trading banter with the servers. Sometimes they're on a first-name basis. Sometimes they'll be talking Dodger baseball. The servers move around with a kind of ease, like they've been working here since the inception of the place.

Which is all to say: where else can you find this homey sense at 2:00 a.m. on a Tuesday? Decor and sensibility aside, the food is expertly done, even if it's nothing out of the ordinary. Certainly, you'll get the baseball steak if you're in a carnivorous mood (or if you'd just watched Training Day again on TV). It's a fist-shaped chunk of bovine that's more than hearty. There's also a great Roquefort steak, as well as prime rib. Not down with the beef? Also popular are the crab cakes, as well as a seasonal vegan menu that includes mushroom risotto. —Tim Loc 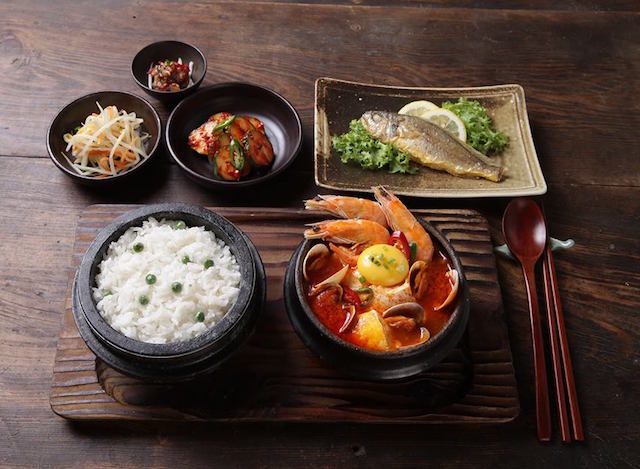 Soon tofu, the bubbling hot Korean one-pot meal, is truly great comfort food—which is exactly what you need in the middle of the night. BCD Tofu House has several Southland locations, but my heart will always be with the one on Wilshire Boulevard in Koreatown, which is open 24 hours. They carry ten varieties of soon tofu, though my personal favorite is their traditional kimchi soon tofu with beef. All of their soups are served in traditional heavy black earthenware bowls with an array of side dishes.

BCD Tofu House is located at 3580 Wilshire Boulevard in Koreatown. 213-382-6677 The BCD Tofu on Western and 9th Street (located at 869 S. Western Ave #2 in Koreatown) is also open 24 hours, as are their Irvine and Garden Grove locations. 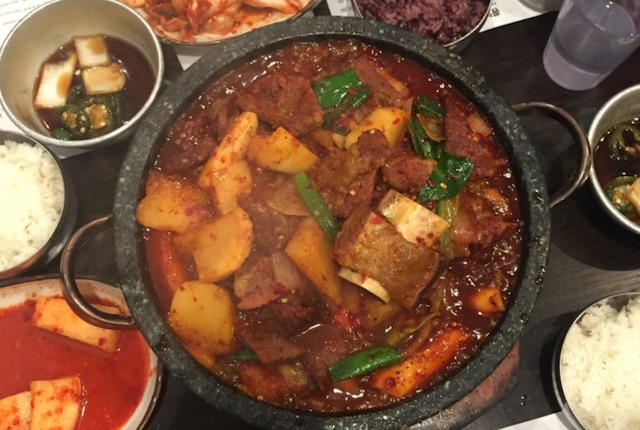 Sometimes you'll stumble out of the Normandie Club during the wee hours and wander aimlessly through Koreatown. The weather is nippy. Your head is in a funk. What you need is something warm, replenishing, and flat-out delicious.

In comes Sun Nong Dan. Here, you can lap up some sullungtang, a broth that is somehow both light and substantial; make sure you pour in that sea salt to draw out the flavors. What'll really wake you to your senses, however, is the galbi jjim, or short rib stew. The beef is achingly tender, and the pot (which can be split between a small party) is loaded with kimchi, potatoes, and rice cakes. It's spicy, and will leave your nose with a slight dribble, but not so much heat that the flavors get drowned out.

The lines for dinner can get pretty long (don't even get us started about the parking). It may be wisest, then, to check in at an ungodly hour. —Tim Loc 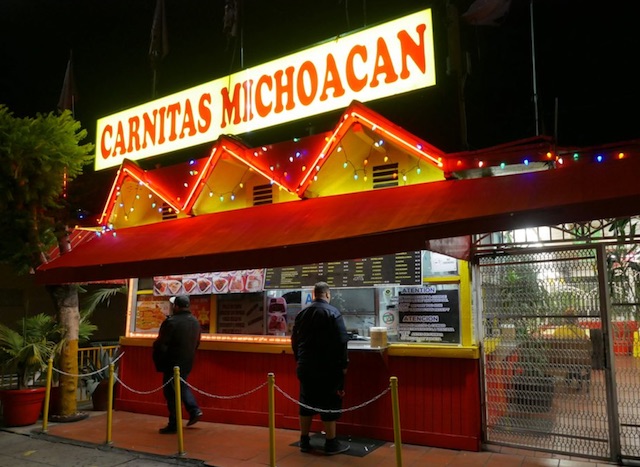 At first blush, you'd think that the main appeal of Carnitas Michoacan is that, aside from being open 24-hours, it takes a maximalist's approach to feeding us late-nighters. Take, for instance, the carne asada fries, which are so loaded you might need a team of petroleum engineers to get to the bottom of it.

But the space, long a hang-out for night owls, isn't just about big portions. The meats are always drenched in flavor, and they're not diced to oblivion, as they often are at other places; you can actually sink your teeth into a hefty hunk of pork. The al pastor is tender, and the tripas is especially crispy. And when you need a soup/stew to bring some warmth back into your bones, you can't go wrong with the cocido, the pozole, or the albondigas.

There's a new wave of chefs who are re-imagining Mexican cuisine—exciting times indeed. Carnitas Michoacan, however, stands as an bastion for the fare that so many Angelenos have grown up with. —Tim Loc 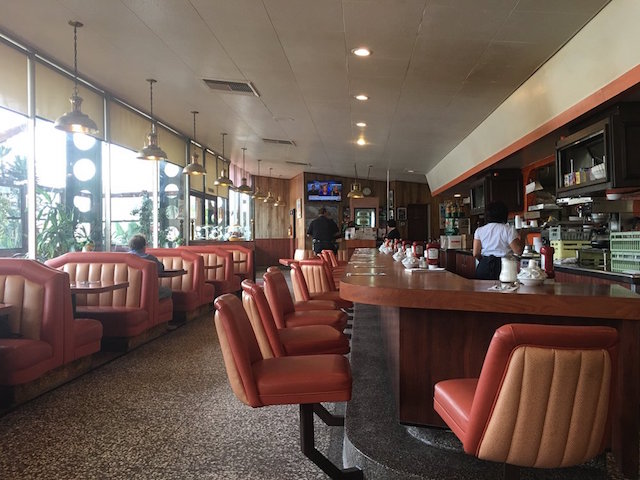 I have written too many middle-of-the-night papers to count over the years at Astro. Despite its Silver Lake locale, this wonderfully old school diner remains gloriously unhip. There isn't a spot of kale to be found on the menu, or an avocado toast in sight. Parking is plentiful (they have their own lot!) and it's always well lit. I come for the pancakes and the diner coffee, and no one minds if I stay all night. There aren't any outlets or free wifi, so it's not your typical all-night working spot, but their booths are cozy and uncrowded and full of unpretentious charm. The Googie-style building was designed in 1960 by Louis Armet and Eldon Davis, two of the architects who helped popularize the midcentury Southern California architectural style.