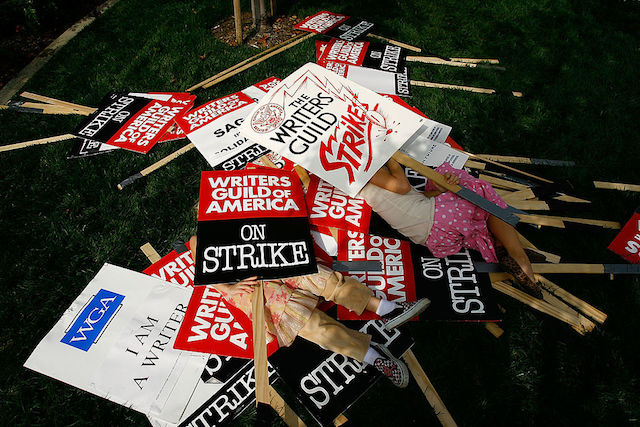 From the 2007/08 WGA strike. (Photo courtesy of David McNew/Getty Images)

A feeling of déjà vu is settling over Hollywood as the threat of a writers' strike moves closer to being a reality for the first time in a decade.

The story is not too far removed from that of the plight of the U.S. middle class. While industry profits skyrocket, the writers who propel Hollywood are being financially squeezed. The issues that the writers face are plenty; traditional 22 episode seasons are slashed in favor of 10-13 episode runs; streaming services provide no residual payments; and their health insurance is precarious.

Variety broke down the healthcare jargon for easy digestion:

At present, that health care qualifying earnings threshold stands at a minimum of $38,302 within four consecutive quarters. Employers make a contribution to the health plan based on a percentage of earnings paid out to writers, although that employer contribution is capped after an individual writer reaches $250,000 in earnings on a single movie or TV program. The guild is asking to raise that cap to $400,000, which would translate to a big cost increase for the studios. For a half-hour pilot, the cap now stands at $170,000, and the guild is asking for an increase to $272,000. For a pilot longer than 30 minutes, the guild is looking to raise the cap from $225,000 to $360,000.

With its contract set to expire on May 1, the Writers Guild of America is readying itself for a walkout. Howard A. Rodman, seasoned labor advocate and president of the Writers Guild, West, is leading that effort.

“Without beginning with the script — whether it is television, it’s film, it’s new media — none of the rest of the larger machine functions at all,” Rodman said in an interview with the L.A. Times. “That needs to be deeply recognized by the industry. We need to be compensated in a way that is just and proportionate to our contribution.”

The 100-day writers’ strike back in 2007 cost the L.A. economy approximately $2.5 billion, a fact that has not slipped the minds of the WGA. "Everyone is hoping the threat of a strike will be enough to motivate the Alliance of Motion Picture and Television Producers to bring more to the table," one staff writer on a cable show told LAist. "I haven’t met anyone who is actually hoping to strike," he added.

A strike authorization vote concludes on April 24, at which point it will be determined if the Guild will strike.