The Inside History Of The Tam O'Shanter, One Of L.A.'s Oldest Restaurants

Every Los Angeles eatery with linen tablecloths and an overpriced prix-fixe menu likes to bill itself as “a touch of old Hollywood glamour in an ever-changing town,” but compared to the Tam O’Shanter, the rest are mere pretenders to the throne. Opened by Lawrence Frank and Walter Van de Kamp in 1922, and originally named Montgomery's Country Inn until 1925, the Tam is L.A.’s oldest continuously operating, same-family-owned restaurant; it’s hard to say exactly what has kept the place open for business when peers like the Formosa Café have closed their doors, but maybe the secret to the Atwater Village institution’s longevity is its distinct lack of pretension. After all, when your restaurant has claimed the likes of Walt Disney and John Wayne as regulars, you can get away with serving up an entrée of haggis and a side of onion rings on a blissfully linen-free table.

The Tam O’Shanter might be hearty Scottish pub fare on the inside, but it’s pure Hollywood on the outside; original owners Frank and Van de Kamp, who went on to co-own Lawry’s Restaurants, commissioned Street Angel and Ben Hur art director Harry Oliver for the restaurant’s architectural design. With some help from movie-studio carpenters, Oliver constructed the Tam in the distinctive Storybook style (also seen in his Beverly Hills “Witch House”), and the restaurant’s whimsical facade has persevered through nearly 95 years and several remodels. Frank credited the building’s endurance to its burnished-wood exterior, once explaining in conversation that “every piece of wood which was used in this structure was thrown into fire first with the result that we never had to paint it and it got more beautiful as the years went by." Indeed, Oliver’s original architecture may be the only thing allowed to age gracefully in Hollywood.

Eagle-eyed patrons might recognize the Tam O’Shanter as a location from hit TV shows like “Glee” and “Mad Men”, but the restaurant’s history reaches back into the storied past of the Hollywood studio system. A 2010 Vanity Fair feature on the 1940s Disney boys’ club (and the few women among their ranks) reported that senior Disney animators flocked to the Tam O’Shanter after hours, perhaps as much for its “tartan-clad waitresses” as for its cuisine.

As the Disney boys aged into the studio’s venerable “Nine Old Men”, they kept eating and drinking at the Tam; according to the LA Times, Disney animators visited the restaurant so frequently over the years that it was dubbed the unofficial “studio commissary”. Walt himself favored the fireplace-adjacent Table 31, reports KCET, an inclination that the Tam O’Shanter now commemorates with the signature “Table 31” cocktail, as well as a plaque on the table itself:

Walt and friends weren’t the only old Hollywood stars who hid their light in the Tam O’Shanter’s dark-paneled interior; in his 2016 book “LA’s Legendary Restaurants: Celebrating the Famous Places Where Hollywood Ate, Drank and Played”, author George Geary depicts the Tam as an off-the-radar industry enclave where it was “not uncommon to spot Mary Pickford, the Keystone Kops, Tom Mix in his leather chaps and ten-gallon hat, or Fatty Arbuckle in his suit and tie.” According to Geary, the Tam O’Shanter is also considered to be one of the first themed restaurants in the country; in other words, we have Frank and Van de Kamp to thank for Medieval Times. 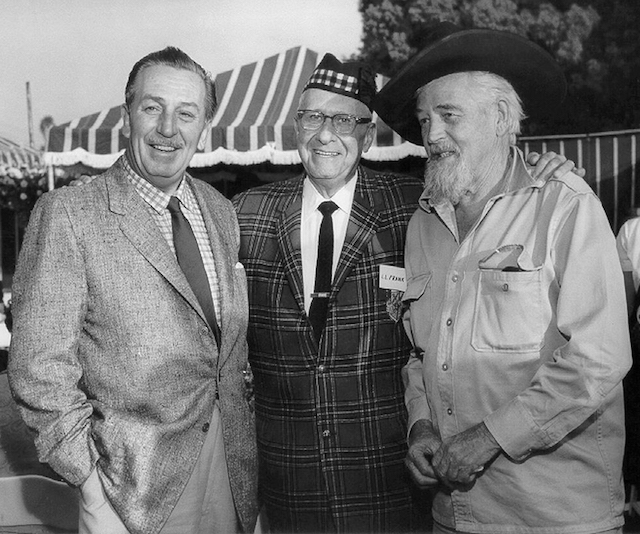 Some classic old-Los Angeles haunts have had trouble staying relevant throughout the rise of nouvelle cuisine and New California cooking, but the Tam O’Shanter staunchly refuses to succumbed to food-fad pressure; they may have changed their name, becoming “The Great Scot” in 1967, then reverting back to “Tam O’Shanter” in 1982, but they’ve never changed the fried, breaded essence of their menu, or that prime rib. 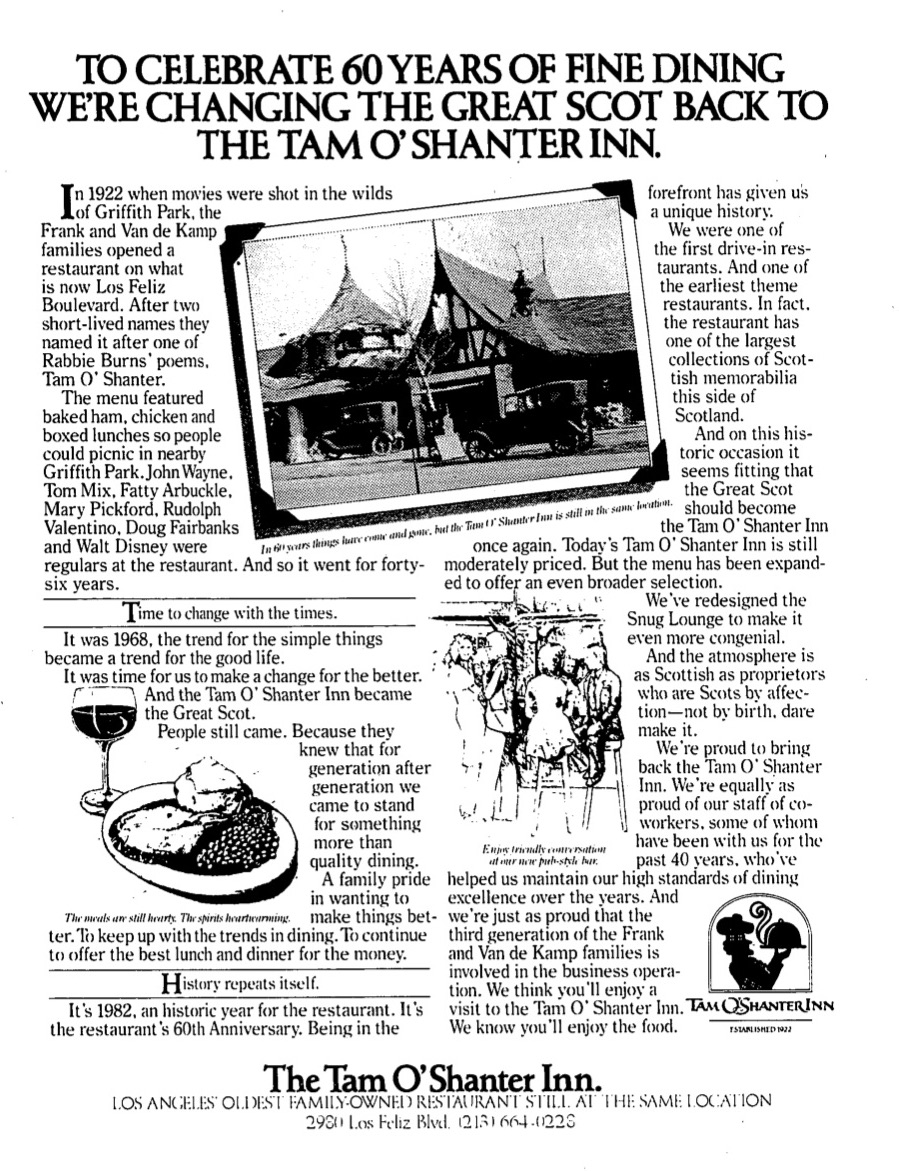 The Tam O’Shanter’s appeal has never been entirely gastronomical; a 1993 LA Times review by Jonathan Gold panned the Tam’s “weirdly bland toad-in-the-holes and rarebits and spinach salads,” but commended its roast beef sandwiches and freshly ground horseradish, ultimately reserving his biggest praise for the pub’s inventive drink menu and roster of spunky waitresses.

Decidedly untrendy Scottish cuisine aside, the Tam O’Shanter has made at least some effort to stay current over the years; a 1985 LA Times article recounted the restaurant’s recent foray into automated payment, concluding grandly, “The future is here.”

A few years later, a 1988 LA Times feature on the Tam O’Shanter noted that the pub was attracting a surprising demographic: Sierra Club hikers, who would drop by for Wednesday night sing-alongs after excursions in nearby Griffith Park.

Scottish food and strenuous outdoor exercise don’t normally go together, but the Tam O’Shanter isn’t afraid to buck convention. And after 95 years of steady business, who are we to doubt them?

Emma Specter is a freelance writer and copy-editor who was born and raised in New York City, moved to Los Angeles two years ago and is probably getting a parking ticket as you're reading this.