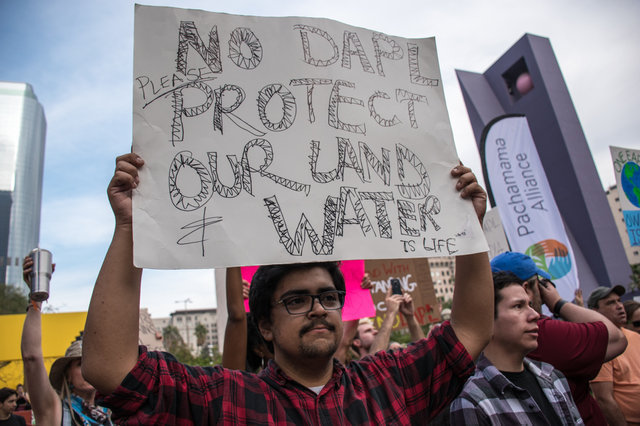 On Tuesday, Councilmembers Mitch O’Farrell and Paul Koretz introduced a motion calling on the city to divest funds from Wells Fargo bank in protest of the bank's financial support of the Dakota Access pipeline. The People's Republic of Santa Monica moved to sever ties with the bank earlier this year, and Seattle pulled their contracts (worth $3 billion!) with Wells Fargo in February, as did the city of Davis in Northern California.

“I want to send a clear message to the financial institutions everywhere that Los Angeles must fulfill its role as a national leader on the environment,” Councilmember O’Farrell, who is member of the Wyandotte Native American tribe, said in a statement. “The actions we take locally have consequences elsewhere and we must not be complicit in a scheme that negatively affects ancestral lands or the sovereign rights of the Standing Rock Sioux Tribe in North Dakota."

The hotly contested Dakota Access pipeline, which runs more than a thousand miles from North Dakota to Illinois, has been the subject of numerous protests here in Los Angeles, where activists have rallied to stand with and show their support for the Standing Rock Sioux Tribe. Last year, the L.A. City Council unanimously approved a resolution opposing the construction of the Dakota Access Pipeline.

City News Service reports that, as of Monday, oil is now flowing through parts of the pipeline and it is expected to be fully operational within three weeks.

Wells Fargo has tried to stress that they are but one of 17 financial institutions that have made loans to developers of the pipeline, and they are contractually bound to "fulfill [their] legal obligations" to the customers in question.

"Corporations like Wells Fargo often quote their 'fiduciary duty' to its stockholders when approving investments in projects like the Dakota Access Pipeline, however, if they actually looked at the bigger picture and the true cost of fossil fuel investments, which are wrecking our once-livable climate, they would see they are putting not only their stockholders at grave risk, but the entire planet," Councilman Paul Koretz said.

The councilmembers' motion would direct the City’s Office of Finance to report on options for divestment from all holdings with Wells Fargo, as well as include recommendations for the immediate reinvestment of proceeds from any divestment actions with other financial institutions that comply with the City’s Responsible Banking Ordinance. The city currently holds over $40 million in securities with Wells Fargo that have a one to four year maturity, according to a press release from Councilmember O'Farrell's office.

“The movement to defund the Dakota Access Pipeline is about standing up to corporate banking institutions by taking away what they care about most—their bottom line," Chrissie Castro, Vice Chair of the City-County Native American Commission, said in a statement. "It is the responsibility of all Angelenos to ensure the city’s banking practices are consistent with our values of justice, integrity, and fairness."

"The only language that the people who would risk our environment and steal rights from folks in the name of profit understand is money," Los Angeles musician and environmental activist Josh Epstein told LAist, explaining why he supported the city's potential divestment.