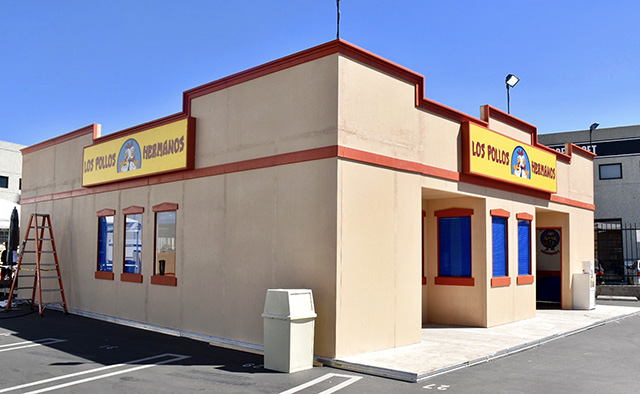 The Los Pollos Hermanos pop-up, in the process of completion on Tuesday. (Photo by Julia Wick/LAist)

Breaking Bad and Better Call Saul superfans will likely be heading to the Arts District in droves come Wednesday, when Los Pollos Hermanos (the restaurant from the shows) opens its doors for a two day stint in L.A.

Albuquerque's favorite (or at least alternate Breaking Bad universe Albuquerque's favorite) chicken restaurant previously popped up at SXSW in Austin. Our friends at Eater report that the Austin pop-up dished out curly fries, water, and three dipping sauces, but no chicken. Eater's post noted their hopes for some of that eponymous pollo at the restaurant-cum-viral-marketing-stunt's West Coast outpost. Unfortunately, the AMC press release appears to only tout the aforementioned curly fries, so you should probably just head to Zankou if your love for chicken outweighs your level of Breaking Bad fandom.