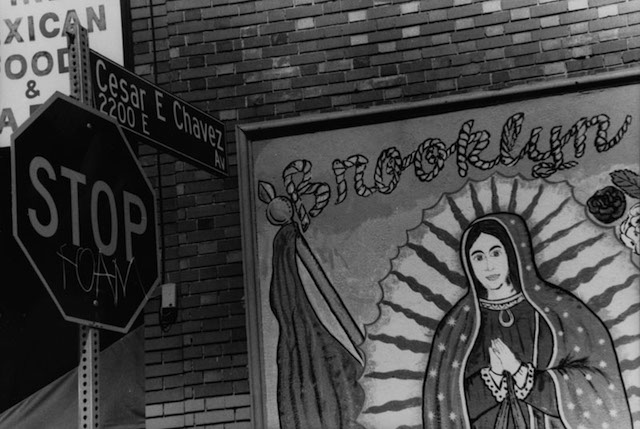 An undated photograph of a mural of Our Lady of Guadalupe honoring the old Brooklyn neighborhood in the 2200 block of E. César E. Chávez Avenue (formerly Brooklyn Avenue). (Photo courtesy of the Los Angeles Public Library Photo Collection)

As most Angelenos know, Los Angeles' mammoth Sunset Boulevard changes nomenclature as it reaches downtown. Just past the 110 freeway, the signs change and the busy street becomes Cesar E. Chavez Avenue, which then winds east, over the river and all the way out to Monterey Park.

The seven-mile stretch of roadway (also seen as Avenida Cesar Chavez in some signs) bears the name of the late labor leader and United Farm Workers founder, but it wasn't always so. The street was known as Brooklyn Avenue for more than a century, before it was rechristened in 1994, a year after Chavez's death.

Drawing of a panoramic view of Los Angeles, looking east from Boyle Heights in 1877. A portion of Boyle Heights (then called Brooklyn Heights) is in the foreground, with street names labelled. Beyond that is the Los Angeles River and the Plaza and hills to the north. (Photo courtesy of the Los Angeles Public Library Photo Collection)

In 1858, an Irish immigrant named Andrew Boyle had purchased an area of land then known as El Paredón Blanco (the White Bluffs), planted some vineyards and built a home on what is now Boyle Avenue. In 1876, a year after Boyle's son-in-law William H. Workman had subdivided the area for residential development, the "street" that would be its main boulevard was named Brooklyn Avenue in an attempt to entice residents from the east to Los Angeles' first suburb.

Residents were indeed enticed, though we'll likely never know whether it was, in fact, the name that did it. Between 1880 and 1889, Los Angeles' population exploded, growing almost ten-fold from 11,000 to 100,000 residents, and many newcomers settled in Boyle Heights. During the first half of the 20th century, Boyle Heights was the city's great melting pot. Nicknamed "the Lower East Side of Los Angeles," it served as a kind of Ellis Island, with working-class immigrants of all stripes making their home in the downtown suburb. For a time, the neighborhood even had the largest concentration of Jews in the U.S. outside of New York. 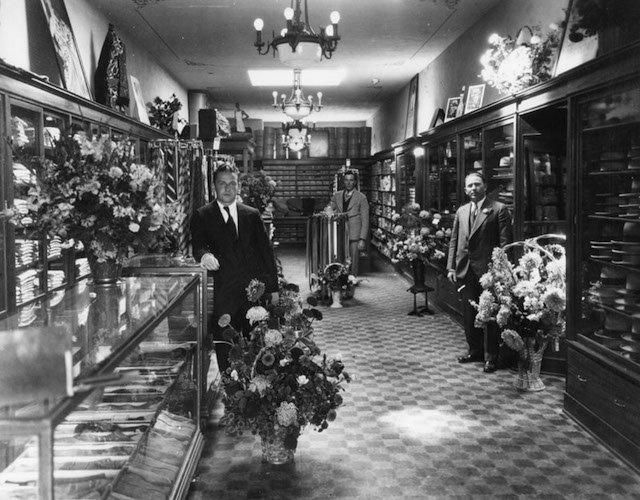 About 40% of the population was Jewish during the 1920s and '30s, according to the Los Angeles Conservancy, and Brooklyn Avenue was the beating heart of the neighborhood. The original Canter's Deli (now a Fairfax institution) opened its doors on Brooklyn Avenue in 1931.

During the period of time between the two world wars, "dozens of kosher restaurants, bakeries and cafes with Yiddish and Hebrew signs lined Brooklyn Avenue, as the boulevard used to be known," according to the L.A. Times. "The aroma of burritos and challah bread mingled outside greengrocers and bathhouses, union halls and movie houses. Mariachi and klezmer tunes drifted from apartment windows. Socialists and Zionists argued on street corners in Yiddish and Spanish." 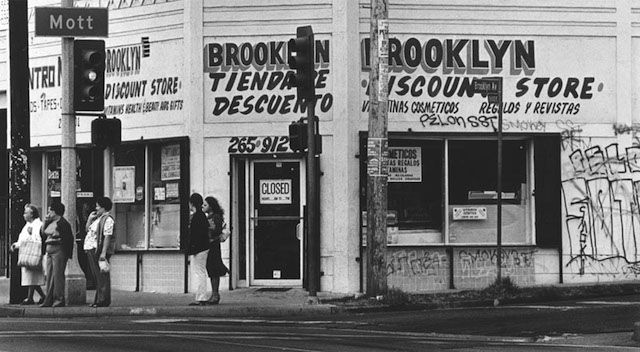 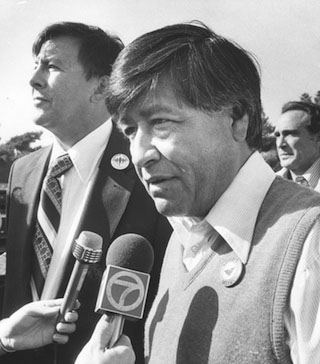 Cesar Chavez at East L.A. College in 1979. (Photo courtesy of the Los Angeles Public Library Photo Collection)
By the late 1950s, the majority of the Jews had emigrated further west, and by 1960, Boyle Heights had become a majority Mexican-American community. By the end of the decade, the once predominantly Eastern European enclave would, along with neighboring unincorporated East Los Angeles, become the birthplace of the Chicano movement. Boyle Heights is now approximately 94% Latino, according to the L.A. Times Mapping Project.

The idea of rechristening the street for the Mexican-American civil rights leader was first raised by former County Supervisor Gloria Molina a week after Chavez's death in March 1993.

The plan, which would be championed by several Latino politicians including then-City Councilmen Richard Alatorre and Mike Hernandez, called for renaming portions of Brooklyn Avenue, Macy Street and Sunset Boulevard for the late labor leader.

The stretch of roadway, which extends from Olvera Street to East Los Angeles College, was chosen for " its symbolic value," according to a L.A. Times article.

"It ties the traditional birthplace of the city to the heart of East Los Angeles," Molina spokesman Robert Alaniz told Hector Tobar in May 1993. "This is a community that was touched by Cesar Chavez and his cause." 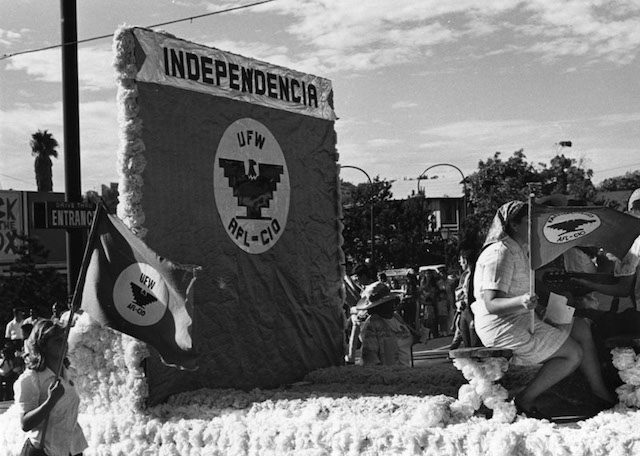 At the time, many worried that the name change would wipe out the area's Jewish history, and some business owners also resented losing their "prestigious" Sunset Boulevard addresses, as the Times reported in September 1993:


Citing concerns ranging from the economic to the historical, hundreds of opponents of the name change have circulated petitions attempting to block the move. They showed up in force at Monday's hearing but were outnumbered by members of the United Farm Workers and other supporters.

Some critics complain about the cost of changing stationary and the confusion that the new name would cause, while others say Brooklyn Avenue is a part of the city's past that ought to be preserved.

There were, as the Times noted, similar protests a decade earlier, when what was then known as Santa Barbara Avenue was renamed for Martin Luther King Jr.

"It's not that I have anything against César Chávez, but it's the robbing of the heritage," Dean Zellman, whose grandfather founded Zellman's Menswear on Brooklyn Avenue in 1921, told the New York Times in 1994. "The people in this neighborhood—it doesn't matter whether they're Mexican, Italian, Japanese, Jewish or Armenian or whatever—all look at Brooklyn Avenue as their roots. But this city, with the little history that it does have, went along with what was politically correct." The haberdashery closed in 1999, after 78 years in business.

Los Angeles City Council unanimously approved the change in October 1993, a day after the County Board of Supervisors had also approved the decision, albeit by slightly closer margins (that vote was 3-2). 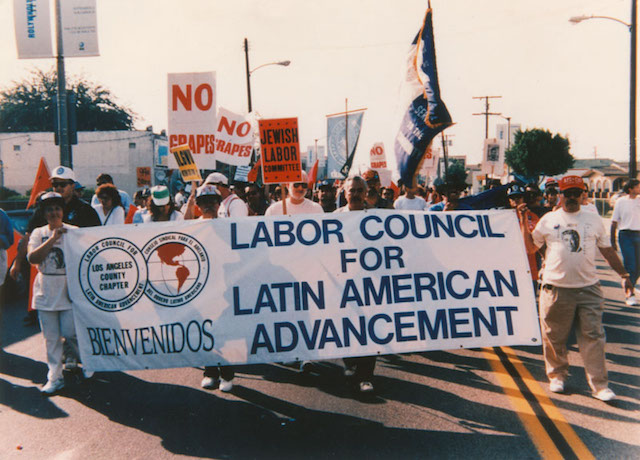 Members of the Jewish Labor Committee participate in the renaming ceremony for Brooklyn Avenue to become César E. Chávez Avenue in Boyle Heights. The committee was asked to support the changing demographics of the neighborhood by the Labor Council for Latin American Advancement. (Photo courtesy of the Los Angeles Public Library Photo Collection)

A mariachi band played the official song of the United Farm Workers and shouts of "Viva Cesar Chavez" rang out on March 31st, 1994, when the street was officially rechristened. The two-hour ceremony was held on the late labor leader's birthday at the five-points intersection of Indiana Street, where the city and county borders meet, and Boyle Heights segues into unincorporated East Los Angeles.