This may sound self-explanatory, but pranks are only as good as the pranksters. The reason why so many fall short, and just come across as lame and tiring, is because the prankster didn't truly commit to the bit or wasn't very good at selling the joke. But sometimes, when the prankster and the prankees and the stars align, the joke transcends the prank and elevates it to a higher realm.

That is what happened when "freelance journalists" Chad Kroeger and Bodhi Johnson pled with the San Clemente City Council this week to install a 12-foot tall Paul Walker statue on the pier. Forget sincerity, sarcasm and all the rest—this tribute to the late Fast and the Furious star is the most beautiful attempt at unity I've seen yet in the Trump era.

First up was Chad Kroeger (who happens to share a name with the lead singer of Nickelback, how weird), who comes before us in the midst of gnarly times to offer a remedy for a broken country:

What up Council, my name is Chad Kroeger. First, I just want to say I'm truly honored to be here. To be in a city where you can have a surf session and then go to City Council meeting within the span of an hour, I think that shows the American Dream is still very much alive.

Alright to the serious stuff: I stand before you today in the midst of gnarly times. I'm a freelance journalist, and after interviewing hundreds of people, I've witnessed first hand the ever growing divide between Americans and families torn apart by political differences. It's in times like these we need a unifying figure we can all turn to, a beacon of headlights that can guide us down the dusty road.

I was 11-years old when my first love Ashley betrayed me by moving to Newport Beach. I felt lost, alone, bummed. And it was in that melancholy that my dad took me to see The Fast And The Furious, where for an hour and 47 minutes I transcended my worries because I had just met my new hero, Paul Walker. Afterwards at Carl's Jr., I thought about what Paul taught me. I think the most inspiring thing was the fact that even after Dominic Torreto beat him in that first race, Paul still managed to bed his sister, pretty inspiring. Another thing is he still saved Vince even though Vince was flexing on him the entire movie, and questioned his love for tuna sandwiches, which I think is a true testament to his character.

And I just want to go off book here: it wasn't just Fast and the Furious, he inspired me in a ton of other movies as well: skulls, Meet the Deedles, 8 Below, Into The Blue, Varsity Blues, just to know a few, and that rhymes. Paul's onscreen legacy was unfortunately cut short. But that does not mean his impact on society must be cut short as well. Detroit has the Robocop. Philly has Rocky. We need Paul Walker. That is why I'm proposing that the city erect a 12-foot tall steel statue of Paul Walker on the pier.

The somewhat stunned City Council members take a beat before they respond. One asks whether Walker has any actual ties to their city in any regard... and they realize that Walker's cousin (maybe) went to high school there (probably). Despite Chad's deep well of affection for Walker, one councilperson responded: "I'm a big fan of Paul Walker, don't get me wrong, but... no. Sorry bro."

But at least one council member really got what he was going for: "Your point is we need an inspiring figure, and that's a very powerful message, thank you for that," said Lori Donchak.

Next up was Bodhi Johnson (Bodhi happens to share a name with Patrick Swayze's character from Point Break, also a strange coincidence). In a world in which people are being literally non-unified, he found the courage to ask out Shelby thanks to the heroic actions of Walker.

Hello Council, I'm really nervous. I haven't spoken in public since my stepmom's funeral. My name is Bodhi. I'm also a freelance journalist.

2017 has been a bummer year so far. You probably can't tell by looking at me, but I'm a laid back dude, and everyone has just been so steamed lately. Well I'm PO'd too, because we're all just running around being literally non-unified. It's in times like these we need a unifying figure we can all turn to. A beacon of headlights that can guide us down a dusty road. Sorry Chad, I stole that from your speech but, it was good.

We've been to all the Council hangouts around SoCal trying to build the statue. Watching that movie was epically life-changing. It gave me the courage to ask out Shelby. It taught me to never back down, even if a super tough crew of street racers come at you. Stand tall.

I'm pretty sure Paul's cousin went to St. Clemente High School, for at least for a couple semesters. And Paul's spirit encompasses what this town is all about. Which is why I'm here before you today. The thing is though, I'm really busy right now, I"m taking a couple junior college classes, and I don't have time to be driving all over fighting for statues. It says on my shirt, 'When you put good will out there it's..." What can be accomplished by Paul Walker. So let's accomplish this, let's do the right thing.

And then he took out a t-shirt to show an example of what the statue could look like: 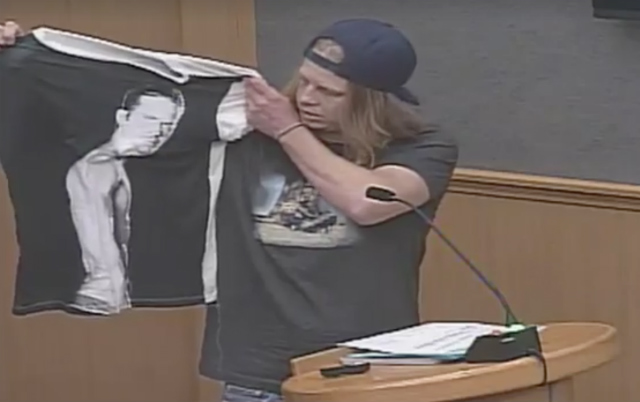 Bodhi wasn't kidding about them driving all over fighting for the statue: 9News also wrote about the surfer bros last week, and their attempt to sell the Walker statue to the Burbank City Council using almost the exact same speeches (though Bodhi added to them, “If I’m willing to drive from Huntington in rush hour then [the council] should be willing to do this tribute to do what’s right").

For what it's worth, there already is a lifesize statue of Paul Walker you can purchase for around $4,000, so perhaps Bodhi and Chad might want to take a page out of their hero's book (ala 2009's Fast & Furious), go rogue, and launch a Kickstarter to kickstart the healing.