Behind The Scenes With Halo Top, The Ice Cream That Might Actually Be Good For You 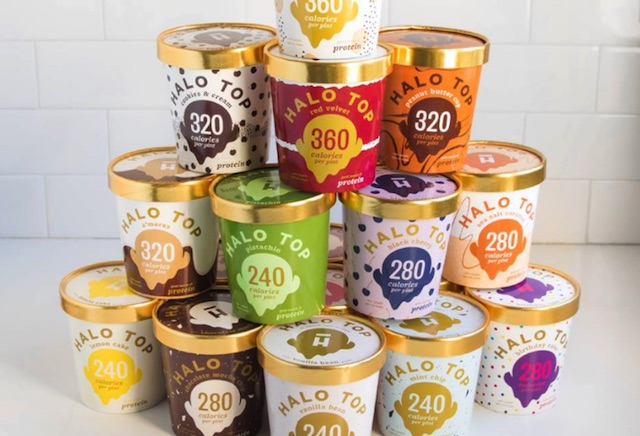 The L.A.-based Halo Top made waves in 2016. An entire pint of ice cream that clocks in at less than 400 calories? One that's low on carbs, but relatively high in protein? This all sounded like a bunch of alternative facts, before the term was even coined. But the good news just kept rolling in. BuzzFeed, in one of their patented people-trying-things posts, gave Halo Top glowing reviews for its taste. And when one GQ writer ate nothing but Halo Top for 10 days straight, he actually lost about 10 pounds by the end of his experiment.

We weren't quite as bold; we didn't subsist on Halo Top for over a week, nor did we hook ourselves up to an IV bag filled with ice cream. But we did sample the dessert, and we're happy to report that this supposed ambrosia tastes...exactly like ice cream. There's the requisite milkiness—yes, there's dairy in it, as well as other basics like eggs. And the flavors—covering a broad range from "vanilla bean" to "birthday cake"—are strikingly bold. The "peanut butter cup" is unabashedly sweet with the strong undertow of, what else, peanut butter. And the "red velvet" is similarly rich, giving us a full-bodied profile that's replete with cocoa and brownie dough.

Part of the secret, as noted at Bloomsberg, is a no-calorie sugar alcohol called erythritol, a zero-calorie sweetener called Stevia, as well as milk protein to make up for the omitted fat (which, aside from other things, helps ice cream maintain its scoopable texture). All this has conspired for a perfectly guilt-free indulgence. Half of the flavors contain less than 300 calories in an entire pint; the highest count comes in at 360.

Check out a video from one of their California packaging factories:

So it seems that the L.A.-based company has it all lined up. But it also presents us with a set of questions. How do they make it taste so good? Why can't I find it at my local store? We spoke with CEO and founder Justin Woolverton via email to find out.

I'm sure you don't want to reveal too much of your secret, but what can you tell me about Halo Top's approach that allows for a satisfying ice cream?

Halo Top is good ice cream because, despite it being a “better-for-you” food, we use extremely top-shelf ingredients (e.g., organic lemon peel, real vanilla, etc.) That’s oddly rare in this “low-cal” category and I think we were the first company to take that route. Think about it: how many lower-calorie products use top-notch ingredients? And it really does help the taste—there was a noticeable difference when we experimented with cheap ingredients in the early days.

Was there a long period of trial and error with Halo Top? What was that process like?

First, Halo Top began because I was making it in my kitchen for myself without even thinking of bringing it to market. (I can’t eat a lot of sugar without feeling weird, so I liked to tool around with different foods and sugar replacements on my own.) I was practicing law at the time, and I’d honestly just bought a Cuisinart machine from Amazon to play around with. It was the opposite of sophisticated. But after realizing it tasted pretty good in my kitchen, and being absolutely miserable practicing law, I decided to take the plunge, quit law, and give Halo Top a real shot, because even in my kitchen it was really good.

So I first had to scale up my little kitchen recipe. And I quickly learned that taking your kitchen recipe and just multiplying it by 100 does not work. Making large quantities on serious equipment is a whole different ballgame. In fact, the first time I ran my scaled-up recipe in a commercial ice cream facility was such a disaster that I had an “uh oh” moment.

So there was a ton of experimentation at that point in scaling up the recipe—which ingredients worked and didn’t work, how to replace the sugar in the ice cream (which not only sweetens, but provides body and texture), et cetera. Honestly that period alone took months, and I was still practicing law at the time on top of it. It was tiring but also exhilarating trying to crack the code.

Luckily I ended up with something that was enough to get into stores, have some success, secure distribution, but there finally came a time to scale up to the big leagues. And that led to bigger problems. None of the bigger facilities wanted to do it. It was like a movie—I heard things like “give it up, it can’t be done, kid.” We finally found one local manufacturer who was willing to work with us, and sure enough, we actually blew their pipes. That was another “uh oh” moment, another huge setback that we had to work through. That involved not only experimentation with ingredients, but also some really technical stuff as it related to machinery.

Some people have commented on the (relative) difficulty in finding Halo Top at stores. Is there a particular reason for this? Will this be changing?

The main reason for that is that we sell out. Stores aren’t used to having ice cream of which people buy four, five, eight pints at a time. They’re used to ice cream that someone buys once a month. So not only do we sell out, stores physically don’t have enough room to store extra Halo Top in the back. We’ve been working hard on solutions to that problem with the stores, and luckily things are a lot better than they were three months ago.

We’re also about to dramatically increase our store count, so that will make it easier to find [Halo Top] as well.

GQ suggested that Halo Top could double as a health food, going as far as saying that, maybe, it could help you bulk up (re: the high protein count). Was this always part of the plan? Or was it something you stumbled upon?

It certainly was intended to be a health food in the sense that I made it in order to have an ice cream that didn’t have a ton of sugar and some protein for satiety. Halo Top is an ice cream that you can eat every day and not feel bad about it mentally or physically. I wouldn’t call it so much a “bulking” food, but a lifestyle food. In fact, we still steer away from calling it “protein ice cream.” To us, it’s like Greek yogurt: a healthy indulgence that just happened to be packed with protein and low in sugar. It’s absolutely wonderful for people who are into fitness, of course, but we don’t think of it as a bodybuilding food per se.

It started as a kind of homegrown science project. I'm sure there were things to learn along the way, adjustments that were made. And I believe there was an effort to make its packaging brighter?

This could fill a novel. I created Halo Top in my kitchen and had zero experience with making ice cream or starting a business. To scale up the recipe from my kitchen, I had to apprentice at a local ice cream factory, read books, learn the “science” of ice cream, all sorts of stuff. Honestly I think being such a rookie helped—if I had been more experienced like a lot of the experts we talked to along the way, I might have thought (like they did) that this type of ice cream simply couldn’t be made.

As for packaging, all of this goes to listening to your customer. You have to be flexible and not rigid. We made some good decisions in terms of branding, but we also got outright lucky some of the time—e.g., the impetus for our packaging change was actually a cease and desist letter from a major brand arguing that we infringed on their logo.

Being an outsider can help. We don’t do things just because that’s what other companies do. We always sit down and really ask, "Why?" I think this has given us an edge.

You can find a listing of stores that sell Halo Top in your area here.

This interview has been edited for length and clarity.