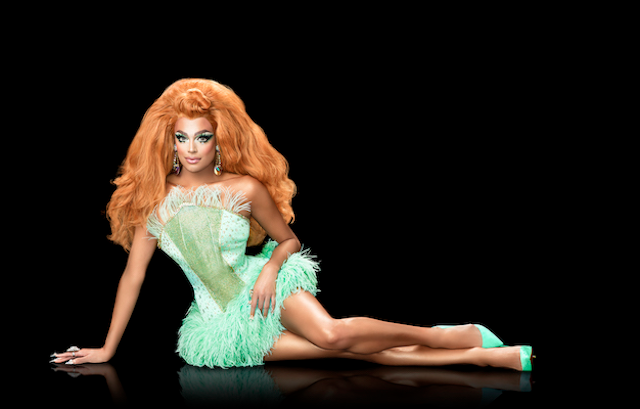 When I speak to Valentina, one of the 13 new drag queen hopefuls on the ninth season of RuPaul’s Drag Race, she says she’s doing fabulous—and she has every right to. At the time of our conversation, Valentina is getting ready for a music video with a “bunch of Ru girls,” the queens of seasons past and the group of elites that Valentina will forevermore be associated with.

Each year, RuPaul’s Drag Race pushes the limits of television, serving up more innovation and searing humor (along with that standard Charisma, Uniqueness, Nerve, and Talent) than previously believed possible. The series won its first Emmy Award in 2016, and considering its jump from Logo TV to VH1, it's likely that the best is yet to come.

The snippets from season nine are harbingers of bigger —and considerably gayer— surprises. Lady Gaga finally claims her throne as the highly-anticipated guest judge in the series premiere, while Lisa Kudrow enters in full-blown Valerie Cherish, complete with her signature “Hello, hello, hello!” phrase from HBO’s vicious series The Comeback, a longtime favorite of RuPaul himself.

A native of the Los Angeles community of Bell, Valentina’s ascent into drag is purely organic. As a child, Valentina—born James Andrew Leyva—immersed himself in the arts, bussing out daily to Hollywood for performing arts school since age eleven. “There were so many moments in which I felt, ‘Oh my god, this show is just like being in school’,” she tells me excitedly over the phone. “My education experience was very creative, we were free to do whatever [we wanted], as long as we covered what was assigned to us and being on the show it felt so much like that.”

Landing a spot on Drag Race is definitive proof that a queen has what it takes to make it. Queens often toil away for years before snagging a coveted space, knowing that in the world of drag, RuPaul’s approval is the gold standard. Drag Race legend Alaska Thunderf—k (winner of Drag Race: All Stars 2) famously auditioned four times before being chosen for Season 5, but Valentina’s course has taken a different trajectory; she snatched a space after her first audition. To top it off, she'd only been doing drag professionally for 10 months, a fact that is ripe with potential for drama and contention among veteran queens.

But Valentina seems unfazed by her auspicious ascent. “I think drag is something that comes natural to me,” she explains. “I feel like it’s what I’m meant to do.” She’s confident without being hubristic, with a solid background in performance and fashion that are the linchpins toward becoming a memorable player in the game. Plus, it doesn’t hurt that Valentina is proudly Latin, utilizing her culture to dig out unique references that could set her apart from the crowd.

Grab your reading glasses, because Season 9 is going to bust the library wide open. 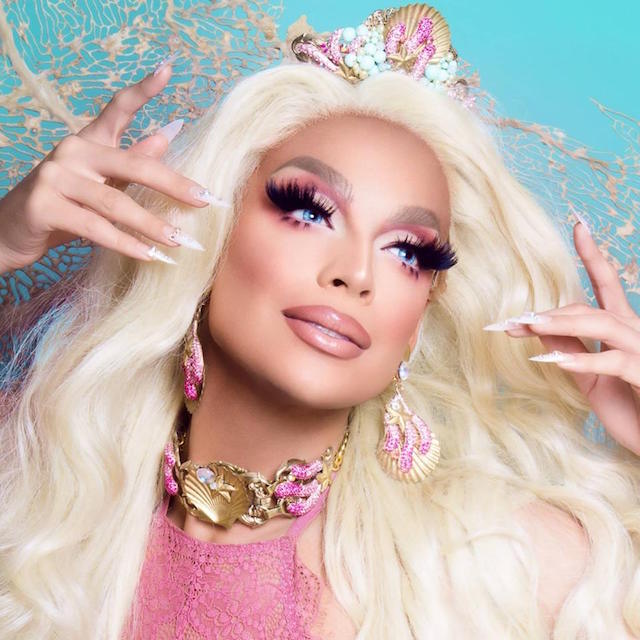 How would you categorize yourself as a queen?

It’s hard to say because I’m quite new to all this. I think I would consider myself a glamour girl, but I think it depends on my look and my level of performance. I consider myself a very passionate performer. I feel like I’m shedding light to the art form of drag that’s very classic in the sense that I can go on stage in a beautiful gown to a very deep song and command attention and emotion through my movement and really be connected to the lyrics. That’s another side of drag that I feel like I’m a big part of and it’s not really common anymore. What’s really common is putting on a Nicki Minaj, a Lady Gaga, or a Beyoncé and getting up there and doing a Vogue death-drop and the audience will live. The challenge that I have for myself is how do I get on the stage and emote my vision and command the attention of the audience through my art without doing a death-drop or a split.

You’re not really about gimmicks.

I’m not! I can try, but I don’t feel like it’s the most natural to me. I really go with this telenovela drama of a fantasy in my mind. I think maybe in my own way I’m trying to create my own category and fully realize these fantasies in my head. Maybe I could be a pageant queen because I’m obsessed with the Miss Universe pageant. I’ve never done a pageant and maybe when I do my first one I’ll feel like a full-on pageant girl!

You share a name with the hot sauce Valentina and you're inspired by telenovelas. How else does your drag persona tie in with your Latin identity?

All of my references are powerful Latina women. I try to incorporate the romance of the Spanish language into what I do. What I do is very romantic, very regal, very elegant. Being Latino and being Mexican, it’s everything that I am and I try to make sure no matter what I’m doing, it’s always through the eye and through the lens of a powerful Latina woman. For instance, if the theme is '80s, someone will instantly think bright colors, lots of blush, whatever. But in my mind I’m thinking, ‘Oh my god, Rocío Dúrcal at Palacia de Bellas Artes [in Mexico City].’ To me, a Latina woman in the 80s is not just doing random popular references. My choices are very deeply rooted in being Latino, always.

A short clip from my debut performance at @Showgirlsweho Performing the song "Asi Fue" by Isabel Pantoja. It's one of my favorite songs composed by my icon, the late and the great Juan Gabriel! RIP❤️ @Mickysweho Thank you so much for having me. I really felt so many emotions pouring my heart out on that stage. Also a big thanks to everyone that was able to make it out. Love you🌹 Hair: @hisvintagetouch Gown and Cape: @laelosness View the full video via YouTube. Link is in my bio

You had been doing drag for ten months when the season was filming. How did it feel competing against seasoned queens?

It felt right. I’d only been doing professionally for ten months, but I consider myself to be a performer my whole life. I remember taking a bath at four years old and submerging myself underwater and opening my eyes and pretending I was a mermaid, then getting out of the bath and getting that towel and draping it around my body in many different ways. It could be a turban, it could be a gown, it could be a dress. I think drag is something that comes natural to me. I feel like it’s what I’m meant to do.

One of my favorite parts of any season of Drag Race is the first episode when all the queens see RuPaul for the first time. It’s always a mix of being star-struck and overwhelmed, and maybe a little bit scared. What was it like for you?

As somebody who hadn’t been on the show, I would watch it and just think, ‘Wow, RuPaul. To consider her your Mama and to be selected to be on the show knowing that she hand-picked you. What does she look like in person? What does she smell like? What is her energy like when the cameras are off?’

Being in the presence of RuPaul was so magical because he’s a total superstar. He carries himself in such a sophisticated way. He’s so eloquent, he’s so charismatic. Whenever you’re in the presence of a star, you do what you can to absorb a little bit of that and learn from somebody who’s had such a repertoire of amazing work and an amazing life. He’s somebody that I really admire and being in his presence was such an honor.

Which queens from past seasons do you also admire?

I really look up to Miss Fame. She’s absolutely stunning. But what I’m really getting to with her is how I really admire her work ethic, how she is with her fans, and what she’s been able to do with her career as a drag queen. She’s molded her own path and achieved so much success in such a short turnaround of time. She’s signed by one of the world’s biggest modeling agencies and she has so much success from being a really talented makeup artist. I think she’s shifting drag to a different direction and it’s really admirable.

Fashion is often a make-or-break element on Drag Race. How does Valentina respond to fashion?

Fashion has always been a big part of my life. I’ve always been that kind of gay boy who wants to know who was great at fashion week and not necessarily the trends, but the stories behind collections. I’m very much that person who likes to study behind the scenes, looking at the lining, the pattern, what kind of materials that they’re using. Fashion is always something I’ve been very connected to and working in the high-end luxury world has helped mold my work ethic.

At the same time working in the fashion world has taught me so much about creating my costumes. The way I create mine is very much like how any star would go and get something custom-made for a red carpet event. One of the most exciting parts of drag for me is the process of creating one of my costumes. It’s something that I connect from my experience in fashion and while working at Prada. I get all of that and inject it into my costumes. A lot of my references have come along from a specific blouse, or dress, or the shape of a collar from all these expensive clothes I couldn’t afford but would admire.

Did you feel a disconnect from being a Drag Race viewer to being in the workroom? Was it hard to make the adjustment?

I walked into this situation being very mentally prepared with an open mind. I was optimistic, making sure I seized every single opportunity. Everything I was living and doing was in the moment. I didn’t have any expectations and wanted to take everything as it came and to do the very best I could.

While it was all happening, I can only remember thinking, "Take it all in because at some point this will all just be a memory. Remember how it smells, remember how big it is, take notice to the lights, curtains, the floor, your workspace, the people that are here." It was very surreal, but at the same time I have so many memories because I made sure that I stored them in my mind and in my heart.