Ten Of The Best Poems About Los Angeles

"Here if anywhere in America, I seem to hear the coming footsteps of the muses," William Butler Yeats wrote on a visit to Los Angeles in 1925. And yet, despite the city's rich artistic traditions, poetry in Los Angeles is usually seen as an afterthought. How do poets portray a place so deeply steeped in its own mythology? Here are ten of the best poems about Los Angeles, from all kinds of poets.

"I Live For My Car" by Wanda Coleman

The Watts-born Wanda Coleman, who died in 2013, was considered by many to be Los Angeles' unofficial poet laureate (this was before we had an official one). Her fierce, fiery poems addressed racism, poverty, and the daily injustices of being a black woman. "Her finest skill," as one reviewer wrote, "is making human pain poetically concrete and devising dialogue that allows the reader under the skin of 'the other.'" If driving is the most L.A. of experiences, then Coleman's poem "I Live For My Car," has to be among the most L.A. of all poems in the history of poetry. It's an unlikely ode to Los Angeles that crystalizes Coleman's frustrations, incisive humor, and drive for freedom:

my car’s an absolute necessity in this city of cars where
you come to know people best by how they maneuver on the freeway
make lane changes or handle off-ramps. i’ve promised myself
i will one day own a luxury model. it’ll be something
i can leave my children. till then i’m on spark plugs and lug nuts
keeping the one i have mobile. i live for it. can’t let go of it
to drive is to live

"The Beach at Sunset" by Eloise Klein Healy

In 2012, Eloise Klein Healy was appointed by Mayor Antonio Villaraigosa as the city's first-ever official poet laureate. She has long been "a stalwart of the Los Angeles literary scene," and the city plays as much a role in her poetry as she does in its literary community. “The Beach at Sunset," from her 2002 book Passing, is both an ode to the city's natural beauty, and our inability to capture it:

and for you I would try it,
though I have always forbidden myself to write
poems about the beach at sunset.

All the clichés for it sputter
like the first generation of neon,
and what attracts me anyway 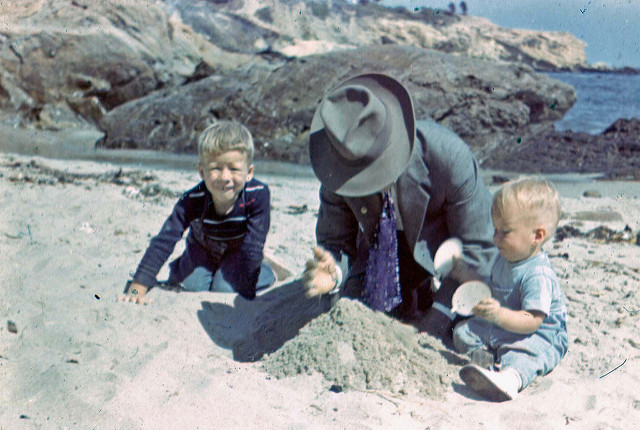 (Photo by Kent Kanouse via the Flickr Creative Commons)

"The Lost World," by Randall Jarrell

Though Randall Jarrell isn't often thought of as a Los Angeles poet, he had deep roots here. Jarrell, who's largely associated with the Fugitive scene out of Nashville, spent a year of his boyhood living with his paternal grandparents in Los Angeles in the 1920s, and he makes a Proustian return to this time period in his final book of poetry The Lost World. The last poem in the book,"Thinking of the Lost World," (which sadly does not appear to be online) contains one of my favorite lines ever written about the city, and one of the more incisive: the deceptively simple "Back in Los Angeles/We missed Los Angeles." As novelist James D. Houston (quoted in the excellent Poetry Los Angeles) wrote in 1982, "Los Angeles is a region, still fed by all the legends we know so well, by all the movies still filmed here, and the countless novels set here—Hollywood novels, detective and police novels, decadence and drug novels, Malibu novels, family sagas—and by all the songs." We all yearn for the legendary Los Angeles, and the Los Angeles of our memories, even as we sit right in the middle of it.

On my way home I pass a cameraman
On a platform on the bumper of a car
Inside which, rolling and plunging, a comedian
Is working; on one white lot I see a star
Stumble to her igloo through the howling gale
Of the wind machines. On Melrose a dinosaur
And pterodactyl, with their immense pale
Papier-mâché smiles, look over the fence
Of The Lost World.

Much like Jarrell, Brecht nails a singular element of the city's psyche in a single simple couplet: "It’s Hell, it’s Heaven: the amount you earn/ Determines if you play the harp or burn." The German composer/playwright/director's poem magnifies a fundamental truth about the city: that the very same streets can feel like purgatory or the promised land, all depending on the current status of your Los Angeles dreams.

Holy Land is not a poem in the typical sense (it's technically a nonfiction book), and yet I can think of no better way to describe it. Waldie's memoir of the Los Angeles suburb Lakewood (the Levittown of the West) is told in 316 slices, each a kind of prose poem. He "writes of his own life in that Los Angeles suburb," as The New York Times put it, "conjuring up its emotional and physical geography, as well as its history and the history of that slice of California, shaped by battles over land and water.... in quick, translucent prose that's both highly specific and strangely elliptical." Waldie makes poetry of the grid on which the first 17,500 houses in Lakewood were built, and poetry of this specific, postwar suburban Los Angeles experience.

Garrett Hongo's 1980 poem "Yellow Light," which was originally published in The New Yorker, is—like many Los Angeles poems—a rhapsodic ode on things not conventionally thought of as being the topic of poetry. It opens with a woman stepping off a hissing bus into a working class, ethnic neighborhood just west of downtown, with "one arm hooked around the frayed strap/ of a tar-black patent-leather purse,/ the other cradling something for dinner." The moments of Hongo's poem are lacerating and lovely in their precision. As T.S. Eliot once wrote, “This is one moment, / But know that another / Shall pierce you with a sudden painful joy,” and Hongo's poem is certainly rich in sudden, painful joy.

If it were May, hydrangeas and jacaranda
flowers in the streetside trees would be
blooming through the smog of late spring.
Wisteria in Masuda’s front yard would be
shaking out the long tresses of its purple hair.
Maybe mosquitoes, moths, or a few orange butterflies
settling on the lattice of monkey flowers
tangled in chain-link fences by the trash.

But this is October, and Los Angeles
seethes like a billboard under twilight.
From used-car lots and the movie houses uptown,
a brilliant fluorescence breaks out
and makes war with the dim squares
of yellow kitchen light winking on
in all the side streets of the Barrio. 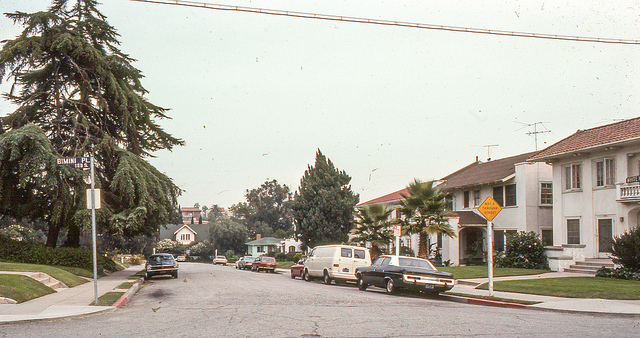 (Photo by Kent Kanouse via the Flickr Creative Commons)

In Mark Jarman's poem of his teenage Los Angeles, driving is also freedom, and it is holy, with "freeways high and smooth as altar tops." It is a poem about being young and still lucky and very alive, clutching at possibility and wanting everything:

We prayed to the engines,
we prayed to the driveways,
to the layers of oil, those belts
of black on the gray streets
our parents paid for, we prayed
to the fumes of gasoline
in our membranes: Give us
girls with flammable skin.
Let our fingers for just one evening
be like lit matches
and not break into sweat.

"A Love Poem to Los Angeles" by Luis J. Rodriguez

Luis J. Rodriguez, the city's second (and current!) poet laureate, remains at the center of the city's poetry scene. The former gang member (he chronicled this time period in his memoir Always Running) founded Tia Chucha's Centro Cultural, a nonprofit bookstore & cultural center that celebrates Chicano and indigenous culture, and also spearheads Tia Chucha Press, one of the country’s leading small cross-cultural presses. Rodriguez has said he has a "love/hate relationship with L.A.," and his "A Love Poem to Los Angeles" perfectly captures that complicated relationship, in all its glory.

To say I love Los Angeles is to say
I love its shadows and nightlights,
its meandering streets,
the stretch of sunset-colored beaches.
It’s to say I love the squawking wild parrots,
the palm trees that fail to topple in robust winds,
that within a half hour of L.A.’s center
you can cavort in snow, deserts, mountains, beaches.

"At the California Institute of Technology" by Richard Brautigan

Eccentric genius and West Coast beat legend Richard Brautigan largely resided in San Francisco, but he spent part of January 1967 living on the California Institute of Technology campus in Pasadena as the school's Poet-in-Residence. Brautigan had never been particularly fond of L.A., which he described as "this strange, sprawling city of gothic vegetation and casual clothing where I am changed instantly into a child thinking that all eight million people here somehow work in the movies." Here is his poem "At The California Institute of Technology," in its entirety:

I don’t care how God-damn smart
these guys are: I’m bored.

and there’s nothing to do.

"In Chandler Country" by Dana Gioia

Few elements of Southern California life have been as elegantly mined for literature as the Santa Ana Winds. California poet laureate Dana Gioia's "In Chandler Country" (yes, of Raymond Chandler) references and toys with the Santa Ana canon, while creating its own gravelly elegy:

California night. The Devil’s wind,
the Santa Ana, blows in from the east,
raging through the canyon like a drunk
screaming in a bar.
The air tastes like
a stubbed-out cigarette. But why complain?
The weather’s fine as long as you don’t breathe.
Just lean back on the sweat-stained furniture,
lights turned out, windows shut against the storm,
and count your blessings.