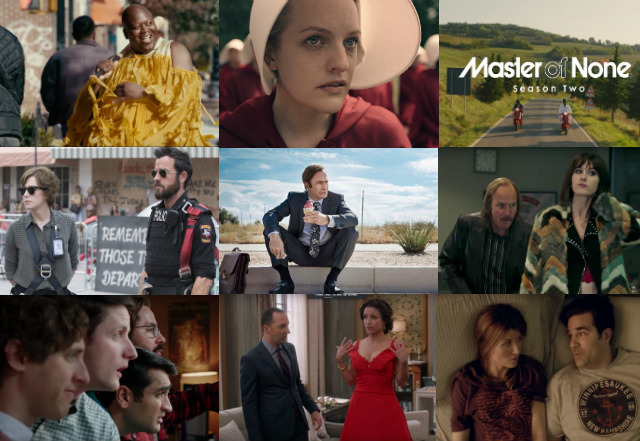 The winter TV programming was pretty hit-or-miss this year: The Americans, Feud, Big Little Lies and Legion were all must-see shows, but Iron Fist was a disaster, Taboo was a waste of Tom Hardy, and Homeland has been mired in its least-compelling season ever (and yes, that counts the season in which Brody was forced to become a heroin addict and Dana and her shitty boyfriend ran over someone). But worry not, because we have the two most exciting months of TV premieres coming up, with a killer lineup of shows that will keep you glued to your couches for hours upon hours. Below, check out a list of our 12 most anticipated shows for spring 2017.

BETTER CALL SAUL (AMC, April 10th): Saul was funnier (Hoboken Squat Cobbler!), more comfortable with its Breaking Bad roots (Mike's one man war against the Salamancas), and more tragic (everything involving Chuck and Jimmy's long-simmering family feud) in season two, and we expect it to only continue its ascent in season three. We hope Kim continues to get more of the spotlight, and we can't wait to see the long-awaited return of Gus Fring: "Gus is more Gus than Jimmy is Saul, but he’s still got a ways to go,” Bob Odenkirk said recently. "One of the big stories of season three is him progressing to who he became in Breaking Bad."

THE LEFTOVERS (HBO, April 16th): The most depressing (and oftentimes beautiful) show on TV about family, miracles and the healing power of smoking cigarettes returns after a year-long break for its third and final season. We know both the Garvey and Murphy clans will be back, and we know the season will partially take place in Texas and partially in Australia (which, lest you forgot, is where Kevin Garvey Sr. was last seen). Will we have another visit to the purgatory-like afterlife? (Based on the trailer, yup!) Will the show explain the origins of the Sudden Departure? And how many times will Carrie Coon and/or Regina King make us cry?

VEEP (HBO, April 16th): After creator Armando Iannucci left following the fourth season finale of the filthiest show on TV, I thought there was no way season five would live up to previous ones. But it may have been the best one yet, and it definitely made me laugh out loud more than any other comedy (with the exception of my beloved Review). So we have total faith that Selina Meyers' post-presidency will be just as fucking profane and hilarious as her short-lived presidency was.

FARGO (FX, April 19th): The best anthology series on TV couldn't come back soon enough. After season two jumped in time to 1979, season three will take place in 2010, and could include appearances from characters from season one (including the wonderful Molly Solverson). But even if it doesn't, the new cast is stacked: Ewan McGregor plays brothers (one of whom is the "Parking Lot King Of Minnesota"), Carrie Coon is the female lead (who happens to be a cop), and there's a who's-who of character actors filling in all the other colorful roles and trying on their best midwestern accents (Jim Gaffigan, Mary Elizabeth Winstead, Scoot McNairy, David Thewlis, Michael Stuhlbarg, Shea Whigham, Karan Soni, Fred Melamed and Thomas Mann).

SILICON VALLEY (HBO, April 23rd): In its third season, Silicon Valley seemed to be better than ever, finding new hilarious and ridiculous ways of snatching victory away from the Pied Piper guys (without it getting annoying). And from the season four previews, it seems like the gang may be getting back to basics in an attempt to build a new internet, which definitely doesn't sound like a reach.

THE HANDMAID'S TALE (Hulu, April 26th): Elisabeth Moss stars in this adaptation of Margaret Atwood's classic piece of speculative fiction, which deals with a totalitarian theocracy taking over the country and setting women's rights back hundreds of years in the process. The book's themes feel more relevant than ever (sadly), and Hulu has been looking for the prestige project that would put them on the same level as Netflix and Amazon—and this may be it. Also, don't expect everything to be wrapped up in one season—they want this to be their House Of Cards.

CATASTROPHE (Amazon, April 28th): Season one of this delightful British romantic comedy (I can't possibly call it a romcom without insulting it) showed us the manic, brief courtship between the main couple after a one-week-stand turns into a pregnancy. Season two then made the bold decision to jump ahead several years (and more babies) in time to get to the meat of what the show's concerned with: how do adult relationships and priorities evolve over time, and can you keep the romance alive? (Also, when does a Parisian massage go too far?) Season three picks off right where season two stopped, with Rob confronting Sharon about the morning after pill receipt he found shortly after their reconciliation. (Season three will also include Carrie Fisher's final performance, give or take Star Wars Episode VIII: The Last Jedi.)

AMERICAN GODS (Starz, April 30th): It was a huge blow to Trekkies when Bryan Fuller announced he was no longer showrunner for the upcoming new series (Star Trek: Discovery). But one show's loss is another's gain—and in this case, we're very excited about how he's going to adapt Neil Gaiman's modern classic American Gods, which is all about a battle between old Gods and new (Media, Internet, Intangibles). A dollop of Hannibal-worthy gothic/surreal atmosphere, a generous helping of Ian McShane monologues, and a whole lot of world-building to cover has got us pumped for this one.

I LOVE DICK (Amazon, May 12th): The latest show from Transparent's Jill Solloway (and featuring the enchanting Kathryn Hahn) is adapted from the cult feminist book of the same name, and involves a married couple who both become obsessed with the title character (played, appropriately, by Kevin Bacon). The show continues Solloway's tradition of making "the most self-obsessed characters likable or at least interesting," and likely is a must-watch for anyone who swears by Transparent.

MASTER OF NONE (Netflix, May 12th): It would have been a good show if Aziz Ansari had just translated his standup comedy into an ongoing series, but this show was way more ambitious in its scope. It turned out to be a perfect short story show, ruminating on TV diversity, hook-up culture, the sacrifices of parenting, and the heartbreak of young relationships. After a very long break (the writers needed an extra year off to live their lives and come up with new material), season two is upon us, though the only footage we've seen so far is Ansari and Eric Wareheim riding scooters in some gorgeous location. (Perhaps the same country where the two filmed their incredible "Famous" music video?)

UNBREAKABLE KIMMY SCHMIDT (Netflix, May 19th): The spiritual heir to 30 Rock tossed aside the weaker elements of the first season (the kids) and crammed in tons of NYC jokes along with a whole subplot about gentrification in season two. We don't know much about season three yet, but if Titus is "Lemonading" all over the place, that's all we really need to know.

TWIN PEAKS (Showtime, May 21st): That gum you like is finally coming back into style this spring. After years of false starts and premature hope, we are getting 18 hours of "the pure heroin version of David Lynch." All we know is that the new season is a closed-ended, one-time event, that there are approximately 10,000 actors in it, and that it will be must-see TV for Red Room fanatics. And hopefully, we'll find out how's Annie.