Op-Ed: Election Night Was The First Time I Felt Scared To Be An Immigrant In Los Angeles 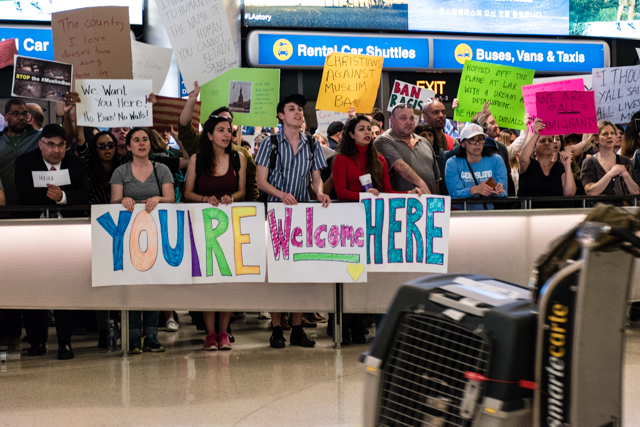 Election Night was the first time I felt scared to be an immigrant. That night, my partner and I sat in front of a television. We gazed at the vote count, our hands interlocked. When Pennsylvania went red, I pulled my feet up onto the sofa. I feared for a simple fact of my birth.

California is my home. I moved here at age 12 from Taiwan with my family and became a permanent resident, learning English as a second language. I went to college and then studied law. Just one month before the election, I had submitted my application for naturalization.

My partner is an immigrant too. The son of two Cambodian Chinese refugees, he crossed the Canadian-American border in a car with his parents and two siblings when he was only three years old. Over the past 23 years, his entire family have become citizens and permanent residents, except him. The immigrant visa backlog has him in line for at least another six years. But his DACA (Deferred Action for Childhood Arrivals) status, which he’d had since 2013, kept him safe from the fear of deportation, or so we thought.

On Election Night, I looked over at him on the couch. Through my tears, I saw him crying too. We could find few words to dull the anguish we shared. When morning came, we were exhausted by uncertainty. Would DACA be cancelled? Could my partner be deported? Could he still work? Should we move or get married? Would he lose his family? Would we lose each other?

I couldn’t find the answers. I pulled out a copy of the Immigration and Nationality Act statute, but the convoluted legal jargon swirled before my eyes. Armed with years of higher education, I still felt frightened; I could only imagine how millions of Los Angeles residents without legal knowledge must be feeling.

I was overwhelmed, and still I know the enormous privilege of our skin color and our education. As Asians, we are not harassed, targeted, dehumanized, and criminalized as many others are in this country. As a student, I had access to some legal guidance which helped ease some fears, if only momentarily.

But even with our privilege, we feel the sting of the new political climate. When the Trump administration announced the travel ban, we wanted to volunteer and protest at LAX, but we were advised not to because we were not citizens. Never before has our lack of citizenship been so alienating in the land where we grew up. Since November, our sense of belonging has been eviscerated.

Are we Americans? I struggled with this question as a teenager. As a girl mocked for her accent, I was at war with the label of foreigner. Now I am a woman, and when that old question comes up again, my only response is: “How can we not be?”

Though we are only 26 and 23 years old, my partner and I have collectively lived in the U.S. for 34 years. We grew up reading To Kill a Mockingbird and The Scarlet Letter. We have friends and family who knew us from public schools, who worked as our colleagues, and who love us deeply. Our friends, those who are citizens and those who are not, have vowed to stand with us and for us.

We look around to see who else feels this alienation by the President, and we find we’re not alone; Los Angeles is full of immigrants like my partner and me. In L.A. County, approximately one million unauthorized immigrants attend school, work, and live with those who are citizens and permanent residents.

Last month in and near Los Angeles, the U.S. Immigration and Customs Enforcement (ICE) raided communities in Van Nuys, Downey, San Bernardino, and Santa Paula, detaining 161 people. Many were deported overnight without the opportunity to seek legal counsel. As a result, fear in the community is at an all-time high with many terrified to leave their homes. News of those with DACA status being picked up by ICE has further darkened our hopes.

The months since Election Night have uncovered a regression in our nation, one threatening to destroy the optimism immigrants have long felt from the idea that America welcomes all people. Now, that welcome has been rescinded, and we are becoming accustomed to fear.

This fear—of being rejected by our home, of being stranded by our community—is only growing. Without action, our contributions and our very existence are denied.

Since November, we have been waiting for the L.A. City Council and Mayor Garcetti to pass a concrete ordinance that protects our frightened communities. Without it, our residents will remain fearful of the police, unable to trust that their sensitive information would not be released to the federal immigration agency. Living in the shadow created by law, our residents will remain frightened to seek help, to report crimes, or to serve as witnesses.

A sanctuary ordinance like the one in Santa Ana will assure our residents that Los Angeles will protect their sensitive information and that it won’t continue to accelerate the deportation of long-time residents. It will mean that our city is compassionate and sensible and that it recognizes the humanity of those who live in fear.

When our President says that immigrants are not welcome, what does our city, Los Angeles, say?

Emma is a law student at UCLA. She is publishing this piece under a pseudonym.