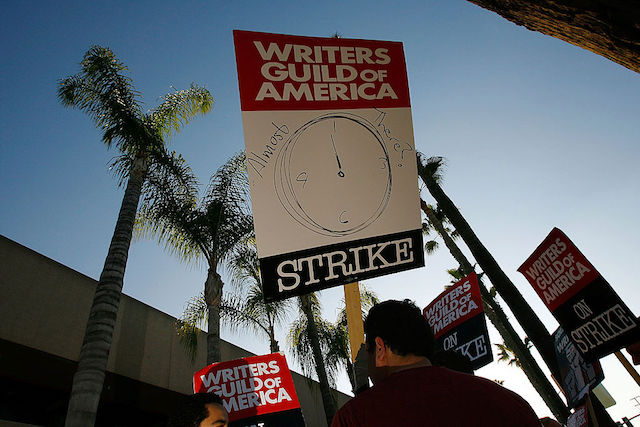 Picketers outside of NBC studios during the 2007/08 WGA strike. (Photo by David McNew/Getty Images)

On March 13, the Writers Guild of America dove into negotiations for a new film and TV contract with a May 1 deadline, meaning the clock is ticking. If the two sides aren’t able to reach an agreement by the time the current contract, established in 2014, expires, a writers’ strike will ensue. The WGA represents film, television, and radio writers working in the United States, boasting about 13,000 members between its East and West Coast guilds.

If all this sounds familiar, it’s because it is. Ten years ago, the WGA launched a strike that lasted 100 days and shortened the writing season by approximately two months. A writers’ strike throws a potentially massive wrench into production; screenwriters are forced into a mad dash to wrap up scripts, since the combination of writers’ strike with the lack of a completed script could halt production for weeks, or even months at a time.

The potential strike is far from a one-issue showdown. Guild leaders are prioritizing ways to receive residual payment from streaming giants like Netflix, Amazon, and Hulu to benefit their members, not just line the the companies' already robust revenue flow. “New models of development, production and distribution, while making the companies richer, have not worked to your individual or collective advantage,” said guild leaders to their members last month, as reported by Deadline.

The WGA craves the financial transparency of traditional movie and TV distribution and has yet to decipher how to navigate that in terms of streaming. “That transparency hasn't been there for the streaming services,” said Dan Stone, an attorney at Greenberg Glusker who specializes in entertainment and media to the L.A. Times. “It's mostly subscription-driven so it's been difficult for the guilds to come up with a residuals formula.… You never know what's going on inside the room … but the WGA seems to have been signaling to its membership that it's willing to go to the mat on this issue.”

Salary negotiations are also on the forefront of the WGA’s list of demands. TV writer-producers have seen a 23% plunge in their median incomes from the 2013 to 2016 while screenwriters have suffered a consistent decline in the number of films released during the last decade, from 296 films in 2006 to 167 in 2016. Pair that with a healthcare plan that could very likely run out of financial backing within three years at the present rate of income and expenditures, and you’ve got the perfect storm for the current labor tensions.

A mounting concern, however, is whether a potential writers’ strike would have the same effect as it did in 2007. TV is no longer bound to its traditional calendar; Netflix and Amazon can space out their original content as they please while studios have proven that viewers will wait out hiatuses for their favorite shows to return to to screen.

The takeaway? Cherish your shows while you can, because all will be revealed in the coming weeks.