The Eight Best Bowls Of Ramen In L.A.

If New York has pizza, and Chicago has bratwurst, Los Angeles stands out for ramen.

The dish consists, traditionally, of Chinese wheat noodle (ramen, itself, is thought to have been brought over to Japan from China just before World War I), and a fatty pork-based broth. Over the years, many variations on this simple dish have emerged, and in 1958, Momofuku Ando created instant ramen—a staple of college dorms ever since.

Following World War II, ramen flourished in Japan due to an abundance of cheap flour imported both from China and the United States. It then made its way to California, where L.A.'s deep-seated Japanese-American community introduced it to a wider American audience.

Today, Los Angeles has some of the most impressive bowls of ramen around (including both imported shops and home-grown noodle slingers). Here are our picks for the eight best bowls of ramen in L.A. 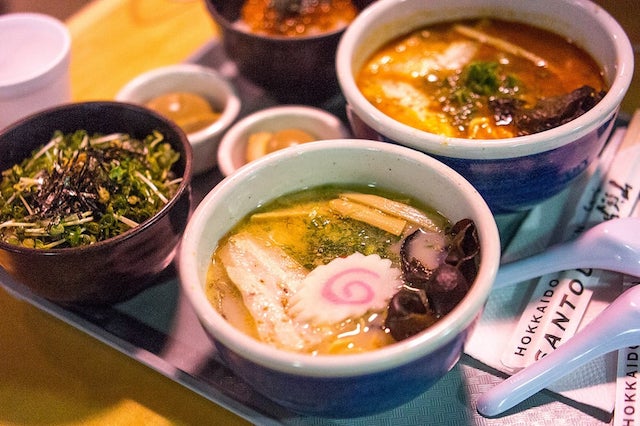 Photo by Karen L. via Yelp

A cult classic to L.A. that offers little in the way of atmosphere for a date, but is the perfect place to catch up with a friend. For the emboldened, you can always take your chances at mingling at the communal tables in between slurps. If that doesn't work out, the marketplace and stores of Japanese goods will keep you occupied.

Their famous shio (salt) ramen—the golden broth is the perfect balance of rich and light—won’t leave you feeling overwhelmed by the fat content. The meat can be underwhelming but the broth and noodles more than make up for it.

Recommendation: Shio ramen. While you wait for the order to be called, grab a milk coffee or milk tea from the Mitsuwa Market for a refreshing and satisfying meal. Beware not to bite into the small pickled plum—it has a pit. 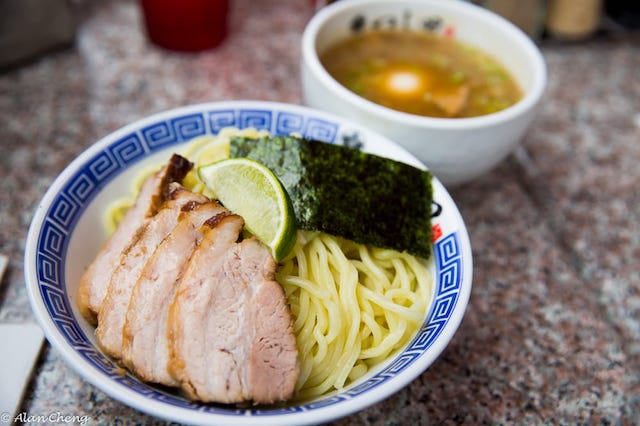 Photo by Alan C. via Yelp

Tsujita LA has one of the best offerings of authentic tonkotsu ramen in Los Angeles. The fatty broth pairs great with the chewy noodles. Across the street is the Tsujita Annex that specializes in the dipping-style of ramen (tsukemen). This spot is only for the most intrepid of first dates, and strongly recommended for second dates to middle-aged romance rekindlings.

Recommendation: Ramen with medium noodles. Add the soft-boiled egg, green onion, and wood ear mushrooms. Treat yourself with that hot sake and a few draft beers. 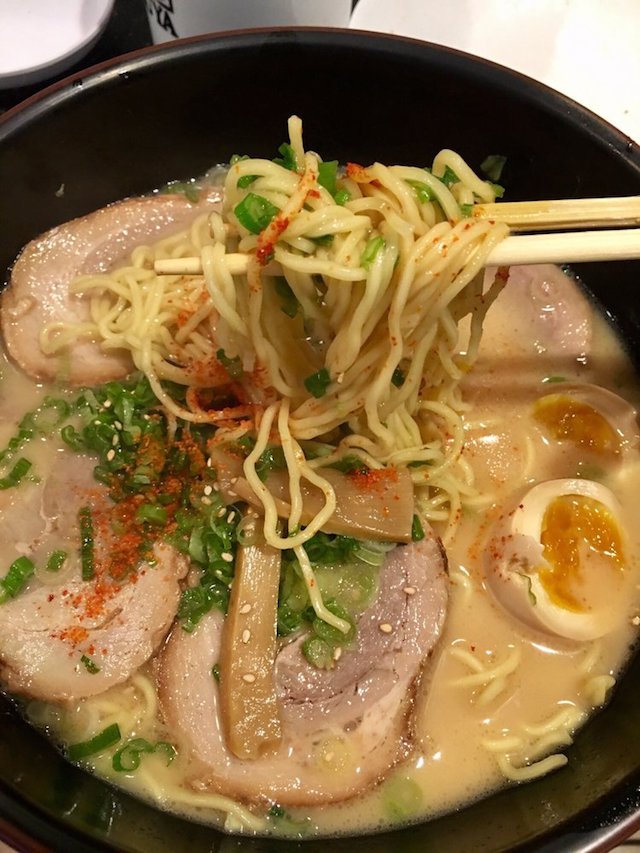 Photo by Sheena P. via Yelp

Probably the first ramen place you really heard about before you knew ramen was a thing beyond instant noodles—Daikokuya is an L.A. staple and longstanding standard for a good bowl of tonkotsu. They’ve been expanding and opening new places all over the city. Though, despite this, many ramen lovers old and new seem to view the journey to the Little Tokyo location as a necessary pilgrimage.

The broth is of medium consistency, and while the bowl as a whole is great, the noodles are a bit lacking considering the reputation of the restaurant.

Recommendation: Daikoku ramen, a tonkotsu and shoyu (soy sauce) blend. Ask for some chili oil to be brought to the table and spice to your preference. Make sure the whole party is there or you won’t be seated—if you have a group of four or more, you’re going to have a rougher time. 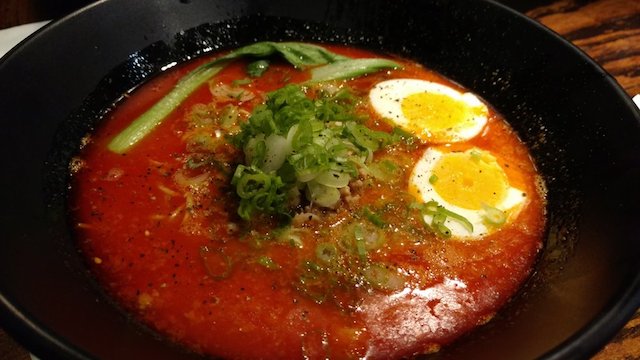 Photo by Craig T. via Yelp

Anzutei recently moved from downtown L.A. to Gardena. The shop’s ramen is a welcomed change to the typical shio and tonkotsu styles. We highly recommend it for the ramen aficionado who has “seen it all.”

Anzutei specializes in a Nagoya-style ramen, tantanmen, which is a Chinese-style dish now made with tonkotsu and chicken broth. The broth is spicy and light, and the noodles are thin and straight.

Recommendation: Tantanmen or shio ramen. Ask for some chili oil to spice them up. 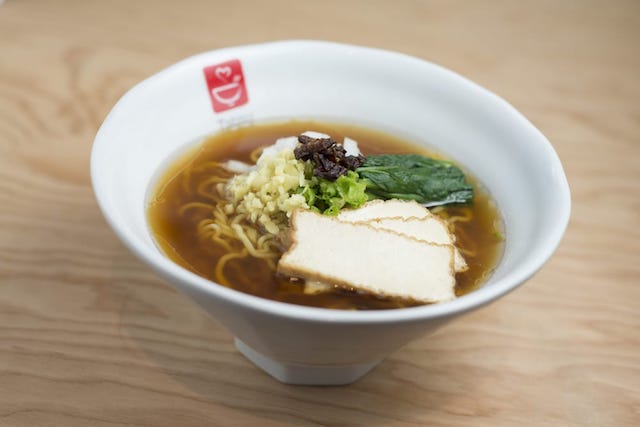 Photo by William K. via Yelp

Be prepared to wait in line at this ramen shop. Despite having an automated iPad ordering system, a line is always winding out the door. The iPads allow you to customize your bowl with various ingredients, and decide how much to add of each. The tables are more community-style seating and each section comes with additional shredded seaweed and garlic cloves that you can put into your ramen.

Tatsu is one of the best places to get vegan ramen—their "Hippie Ramen" is amazing. The broth is sweet onion and soy sauce based, with a hint of ginger, which makes it tangy and refreshing—it's reminiscent of Taiwanese-style ramen. The broth for both the "Soul and Bold" ramen is exceptionally thick, bordering on being too rich (depending on your mood).

Recommendation: "Hippie Ramen." Get a Ramune soda drink and have fun puncturing the marble through. 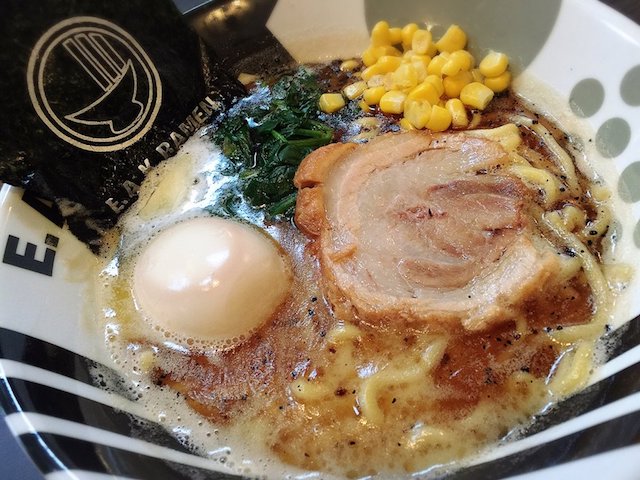 Photo by Eve H. via Yelp

Relatively new to the ramen scene, and just a ten minute walk from Tatsu, E.A.K. is a more intimate setting with hip music playing on the speakers. Also, they have beer.

The "Oh So Hot!" ramen is a miso-based broth, but isn’t as spicy as one would hope. The "Zebra" ramen is a balanced blend of pork and chicken broth. The noodles are very thick, which may not be to everyone’s tastes, but are cooked in a way that makes them both chewy and a bit al dente.

Recommendation: The "Zebra" ramen with the "Spicy Bomb." Get a soju refresher and talk about how nice it is to not wait in the Tatsu line. 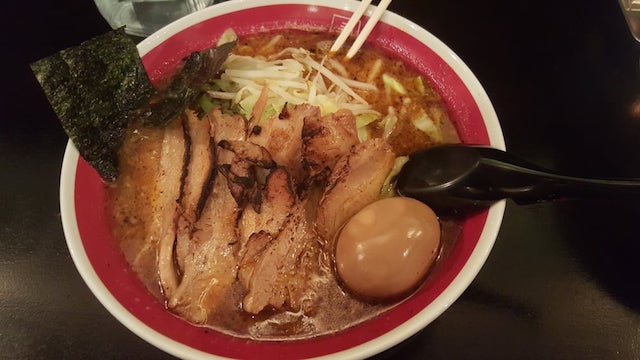 Photo by Nahid D. via Yelp

Located in a small strip mall off of Santa Monica Boulevard, you'll notice this shop isn’t as busy as many of the others on this list. Kotoya provides a satisfying bowl for cheap, and you’d be remiss to pass this little hole-in-the-wall by. 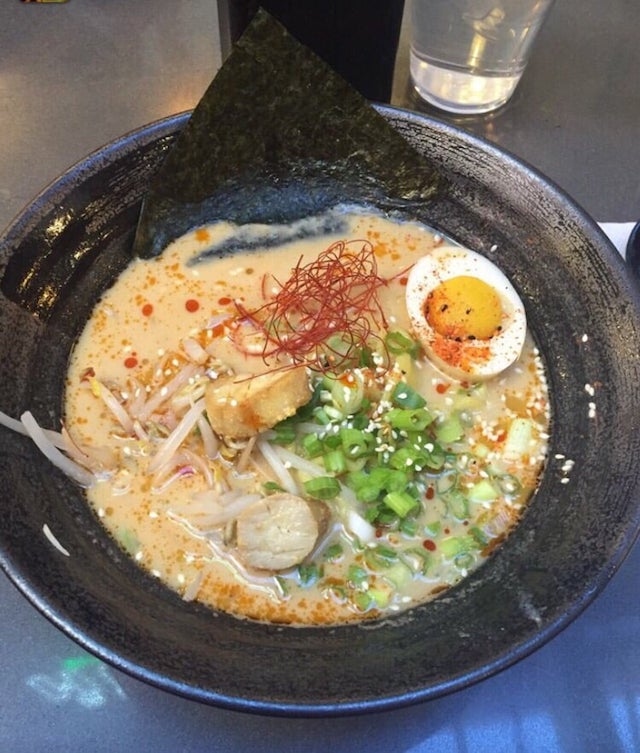 Photo by Fabby M. via Yelp

Found in Grand Central Market, this ramen place is all vegan. If that doesn’t scare you away (it shouldn’t) then you’ll get to try chef Rahul Khopkhar’s take on the traditionally pork-based tonkotsu-style soup.

The rich, milky, opaque broth is made from sunflower seeds, and the “meat” is created from mushrooms. You’ll even get an egg made from soymilk. Sure, we marvel at the alchemy that goes into this bowl of ramen, but it's also just genuinely good.

Erik Fong is a writer living in Los Angeles. If he's not slurpin' a bowl of ramen, you'll find him playing his latest download from Steam.