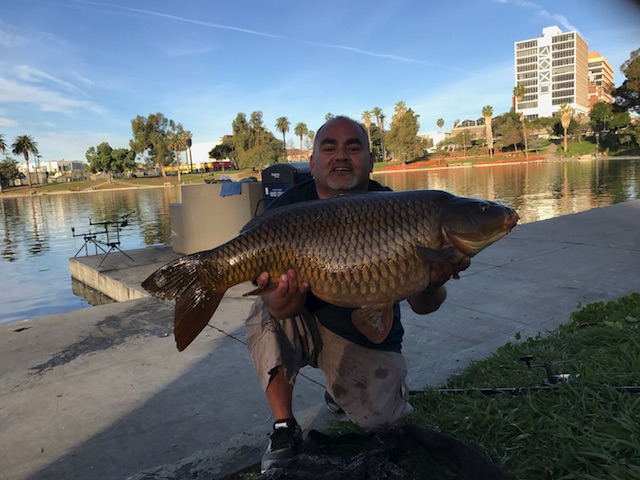 The sun is still down when Sergio Talavera arrives in MacArthur Park and begins to set up his fishing lines. The park may be notorious for a long list of reasons having nothing to do with big carp, but MacArthur Park Lake remains one of 17 locations around Los Angeles County that are regularly stocked with fish by the California Department of Fish and Wildlife. 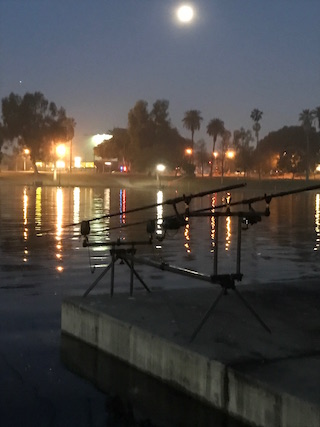 Talavera's set up at MacArthur Park Lake. (Photo by Sergio Talavera)
Talavera, who is known as "Big Serg," fishes the lake about twice a week. "I have my tradition," the 45-year-old longshoreman says. He makes the pre-dawn drive from his home in Wilmington, listening to the news on the radio on his way up, gets a coffee at the Starbucks on Wilshire, kicks back in the car for a minute, and then starts setting up.

The draw of MacArthur Park Lake, he says, is "the big fish," and the chance to talk to the neighborhood kids, and hopefully share his own experiences with them. "I grew up in that environment, and my father took me fishing, and that's how I became a fisherman," he recalls.

The carp he catches in MacArthur Park Lake are among the biggest to found in any lake around, according to Talavera.

"That place holds huge fish. We don't catch anything under five pounds in that place," he says. "Nobody fishes there and the water's dirty. Nobody's gonna eat 'em out of there. And you know the neighborhood. When the sun goes down, it's time to go. Why they keep stocking that lake with trout and carp, I have no idea," Talavera adds.

But for the time being, it's his luck that they still do. His record for the lake is a 37-pounder, and last week he caught a 35-pound carp.

Talavera, who practices catch and release, says that "it's all about the carp care," adding that he has special nets that don't hurt the fish and special hooks that allow them to easily slide off after being caught.

"There's a club that I started, and if they see me abusing the fish, I won't be president anymore," Talavera explains. His club is called California Ghetto Carping. It started with just Big Serge and his friends Rafe and Eddie, but now there are more than a hundred members from Los Angeles, Orange County, San Bernardino and San Diego who meet up once a month or so to fish together.

"'Ghetto' meaning that we go where nobody wants to go to," he explains. "We'll go to MacArthur Park. We'll go to Magic Johnson Park," Talavera says. "We like to go around to neighborhood parks that have lakes in them and we see kids who don't know what they're doing and we teach them. We teach them about catch and release. Because what you take out of here is not coming back," he says, adding that a lot of the lakes around here no longer get stocked with fish because of budgetary concerns. "But this one still does, why I don't know," he adds.

"I'm an ex-gang member myself, so I could relate to them and I could tell them this is what it's about. Fishing can keep you out of trouble, you know," Talavera says.

"To tell you the truth, it's like an addiction," he continues. "If you caught one yesterday at 35 [pounds], now you want to catch one at 37—and you just want to keep on catching something bigger. That's my thing. I don't want to catch a 10 pounder. Somebody have a 10-pounder, that's their jackpot. But me? I want something bigger. I'm going for the state record."