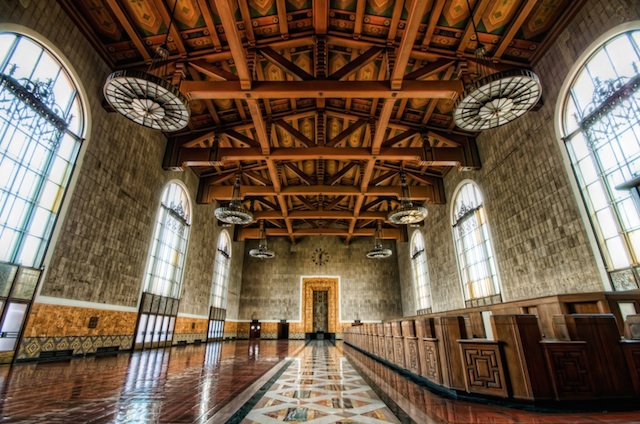 It’s German composer Johann Sebastian Bach's 332nd birthday and you know what that means: Bach in the Subways is returning to Los Angeles.

The premise of Bach in the Subways is fairly straightforward; on March 18 and 19 various L.A. subway stations will play host to free pop-up performances of Bach’s repertoire. The tour de force of the weekend, however, is the 10 Hour Bach Marathon at Union Station, promising “an experience of Bach on a large auditory and visual scale.”

The L.A. Organ Company will be one of the many performers throughout the day, along with the 60-person Aria Korean Choir, the 35-piece L.A. Recorder Orchestra, the conductor-less Kaleidoscope orchestra, and the Noir Saxophone Quartet. World renowned violinist Phillip Levy is also set to perform some of Bach’s more spectacular works like A minor Violin Concerto, the Fifth Brandenburg Concerto, and Erbarme dich from the St. Matthew Passion in the Marathon’s Finale. Spectators can also receive complimentary coffee from Starbucks with the “Coffee Cantata” and enjoy Bach in a state of transcendental caffeination.

Founded by New York cellist Dale Henderson, Bach in the Subways has experienced impressive growth over the past seven years, with performances expanding to over 150 cities and 40 countries.

Find the full 10 Hour Bach Marathon schedule here and follow Bach in the Subway on Twitter for more updates.

The 10 Hour Bach Marathon takes place On March 18 from 9 a.m. to 7 p.m. at Union Station, located at 800 N Alameda St, Los Angeles, CA 90012. Additionally, the Suzuki Music Program of Los Angeles will perform at the Universal City Metro Stop from 2 p.m. to 3 p.m. on Saturday while the Cantabile Chamber Players will be at the Glendale Amtrak Station from 12 p.m. to 1 p.m. on Sunday.

An earlier version of this story incorrectly stated that the Bach festivities would be occurring this weekend, not next.