Is the appeal of old-school arcades self evident? Or is it the nostalgia that we crave? You could make a case for the latter. The clang of the change in your pockets; the manic lights of a pinball machine; the greasy joystick that's probably got more germs than a 5th grade classroom; all these things collude to bring us back to those halcyon days when you were perfectly content with a bag of Air Heads, and the world wasn't yet a smoldering trainwreck.

Outside of the nostalgia, there's just something so refreshingly analog. From inserting the quarter, to jamming that one button that's a little wonky; the whole experience feels so involved and gratifying.

Whatever the source of our enjoyment, few will turn down a trip to the arcade. Here are some of our favorites in the greater Los Angeles area. 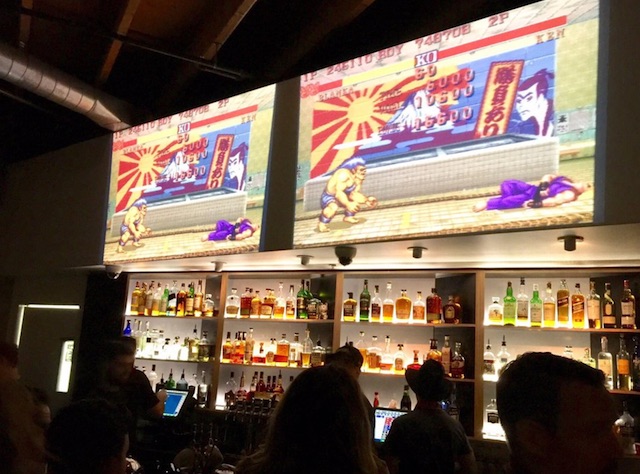 A Projection of 'Street Fighter II' at EightyTwo. (Via Yelp by Chris B.)

Is EightyTwo the arcade's answer to Hollywood nightlife? Indeed, it has all the accoutrements: house soundtrack, bouncer in a black suit, endless supplies of libations, line around the block, et cetera.

If you look past all that, you'll come to a game selection that's expertly curated. While it leans towards the retro, it doesn't do so blindly (or ironically). There are obligatory picks like The Simpsons and NBA Jam, but there are also the deep cuts like Off Road, as well as the notoriously difficult Contra. You can saunter over to the pinball wing if the line for Street Fighter II is too packed. There, you'll find stalwarts like Twilight Zone, as well as some off-the-wall picks like the Elton John-themed Captain Fantastic. Stock up on quarters; don't let the sun go down on you, baby. 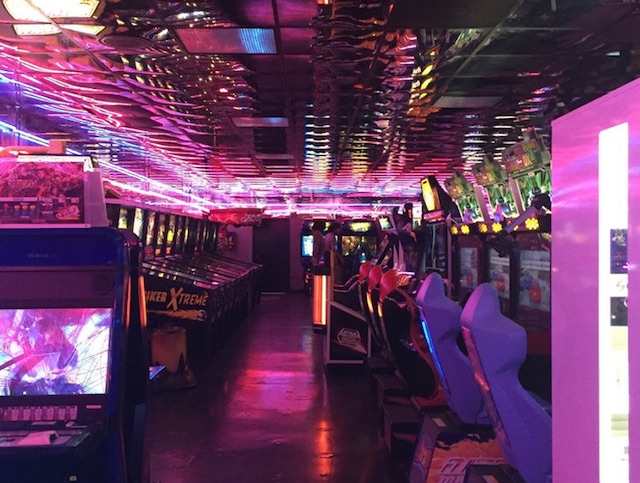 Technically it's called Family Amusement Corporation, which sounds like a company picnic at Monsanto. But to many it's known as Family Arcade, as announced on the red lettering outside.

The arcade covers the gamut: not entirely retro, and not exactly cutting edge. You'll find contemporary picks like Guitar Hero, as well as those driving simulation games that come in abundance at Dave and Busters. You'll also run into old standbys like Mortal Kombat and the vastly underrated Metal Slug. And there are some analog carnival games to boot. Super Shot, anyone?

The aesthetics are an added bonus. There's something about the reflective ceilings and the warm glow of the pink lighting that scream "Ms. Pac-Man." 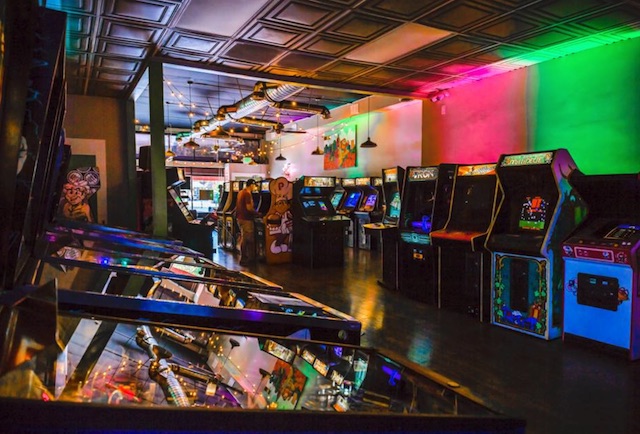 Neon operates on a flat rate system. For $10 you get to play as much as you want for an hour (no quarters required). For $25 you can gorge yourself all day long.

As the title suggests, the pickings are of the vintage ilk. X-Men and Teenage Mutant Ninja Turtles are matter-of-fact. But it's the lesser-known titles like Golden Axe, Smash TV, and Double Dragon that will really take you back to the time of "Book It!," Nerf Super Soakers, and LA Gear.

There's also a Nintendo WiiU set up in the back if you'd rather stay in the 21st century. 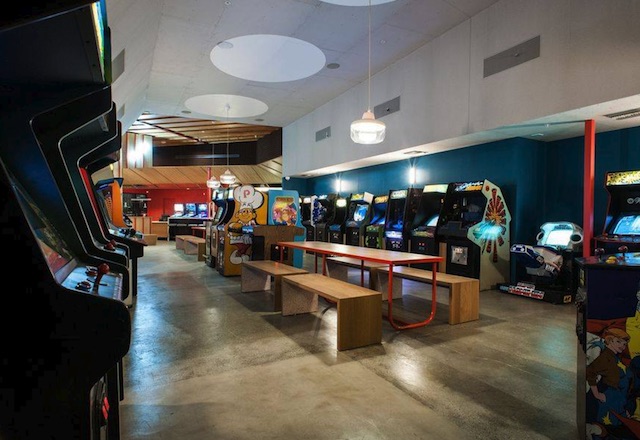 Button Mash, a fusion restaurant that takes its influences from all over the Asian continent, is one part restaurant, and another part arcade. While there's a duality going on here, the arcade library is no less impressive. You know it's the real deal when it has Moonwalker, the Michael Jackson classic in which the Smooth Operator upturns a speakeasy as "Bubbles" the monkey ambles around.

Are pinball machines getting more love than they were, say, 20 years ago? That may be the case; as we wade further into virtual reality, the visceral qualities of pinball seem to grow in popularity. There's the whap of the flippers and the springy pull of the "plunger"; there's nothing virtual here, it's all a symbiotic meld of man and metal.

If pinball is indeed your jam, then Pins and Needles should rank as a top priority. While other arcades offer a perfectly fine roster of machines, Pins and Needles stands out as being one for the true connoisseurs. You'd be hard-pressed to find a new-fangled machine based on The Walking Dead or Game of Thrones. Rather, you'll get some hidden gems from the past, like the Western-themed "Frontier," or the death metal "Centaur."

The hours are somewhat irregular here; they're usually only open during the evenings on Fridays and Saturdays. Check their blog to see when they're on. 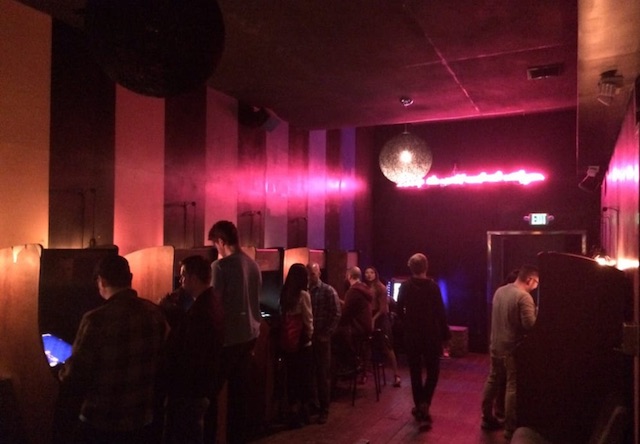 The One-Up (Via Yelp by Giselle V.)

The San Fernando Valley was one of America's wellsprings for mall culture in the late 20th century. It stands to reason, then, that arcades were also a big part of the area's makeup during that period.

Today, nothing is more emblematic of that neon-rich era than Sherman Oaks' The One Up, a kind of grown-up's Chuck-E-Cheese (sans the animatronics). The library is truly expansive. On any given night you'll find a spread that range from side-scroller classics like R-Type, to button mashers like Samurai Showdown, as well as Tetris-inspired gems like Puzzle Bobble.

If you're planning on a gaming marathon, The One Up's food menu will supply the requisite intake of easy calories. The offering is reminiscent of your usual gastropub fare, but with an added twist. Dishes include a pork belly mac and cheese, as well as French dip sliders and poke tacos. There's also a formidable list of craft cocktails.

Now for something different. Vintage Arcade Superstore isn't a walk-in arcade, nor is it a bar or restaurant. Rather, it's a kind of IKEA for video games. The massive warehouse is 11,000 square-foot depot of blinking, beeping cabinets. Likely, you won't have enough in your bank account to justify dropping $2,500 on Golden Tee. But, for a far lower amount, you're able to rent the arcades individually for your own party—the store delivers and installs the games for you. Also, for $200 you can rent out their 50-game showroom for you and your cohorts; the games are set to "freeplay," meaning you won't need to put in tokens or quarters. While Vintage Arcade Superstore is, indeed, pretty vintage, you'll also find more contemporary offerings like the Fast and The Furious driving simulator, as well as the Star Wars virtual game. 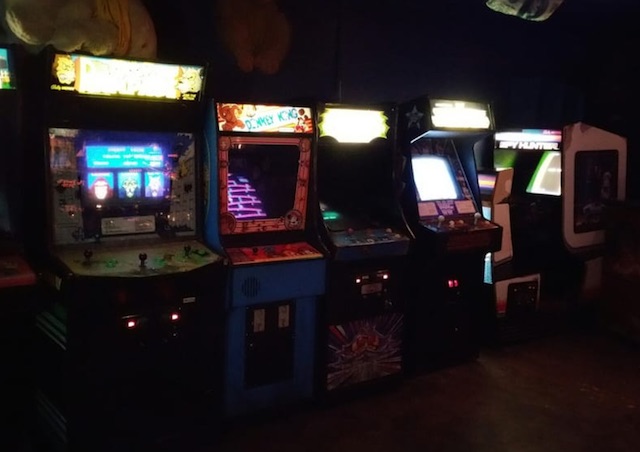 The library might be somewhat limited when compared to others, and the parking situation gets hairy (this is Koreatown, afterall). But we'd be remiss not to mention Blipsy Bar, which (when it used to be known as Miss T's Barcade) was one of the originators of retro gaming in Los Angeles.

As noted at Lifewire, the space began when a group of hobbyists gathered to repair arcades and play them over a few brews. What started off as a kind of DIY, underground party later turned into an official space called Miss T's. While the spot was notoriously hard to find, it gained enough of a following to expand into the space next-door in 2010, when it officially became Blipsy.

The bar is divey, the music is loud (on nights when there's a DJ), and the games are almost strictly vintage. If that's right up your alley, then Blipsy is a surefire thing.