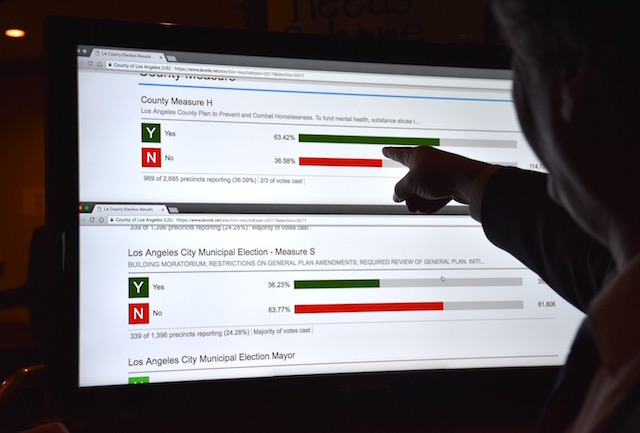 Phil Ansell, head of the county’s Homeless Initiative, watches election returns at a party for the Measure H campaign. (Photo by Julia Wick/LAist)

Election Day has officially been over for more than a half hour, but results remain too close to call on Measure H, a proposed quarter-cent Los Angeles County sales tax that would fund homeless services. The ballot measure would generate about $355 million annually for homeless programs over the next ten years, according to the L.A. Times. In November, county voters resoundingly approved Measure HHH, a $1.2-billion homelessness bond measure.

Measure H needs two-thirds of the vote in order to pass. As of 12:30 a.m. Wednesday, the ballot measure was still falling just short of that benchmark at 65.77%, with 78.21% of precincts reporting.

Speaking at a joint party with the No on S campaign, backers of Measure H spoke optimistically at around 10:30 p.m. Tuesday night, when the "Yes" vote was still just over 62%. County Supervisor Mark Ridley-Thomas (the measure's chief advocate) noted that Measure H was "trending up" with each new set of returns. "We just need it to go all the way up," he told the crowd.

“We didn’t do this because we thought it would be easy. We did this because of our sense of duty, purpose, and obligation to those who need our help. There is nothing I can think of that is more morally compelling than ending homelessness in Los Angeles County,” Supervisor Mark Ridley-Thomas said.

Supervisor Janice Hahn said that Measure H was the most inspiring campaign she'd ever worked on, and urged the room to remember the 47,000 Angelenos sleeping on the streets of the city tonight.

"It ain't over 'til it's over," City Council President Herb Wesson told the crowd, which included representatives from a coalition of nearly 250 homeless service providers, community representatives and business leaders.

Update [1:50 a.m.]: Measure H appears to have crossed the two-thirds majority threshold just before 2 a.m. on Wednesday morning. All precincts are currently reporting, and the ballot measure has 67.4% of the vote (because it's a sales tax, they need 66.6% to pass). Despite having reached that pivotal two-thirds majority, it's still not clear how many many provisional, questioned or late ballots remain uncounted, or how they could effect the extremely close margins on this one.

Both Mayor Eric Garcetti and the Yes on H campaign tweeted out celebratory messages about the two-thirds threshold, though neither exactly declared victory for the ballot measure:

So excited to see Measure H get over 2/3rds tonight. We must not confront homelessness, we must end it. Thank you LA County voters! EG