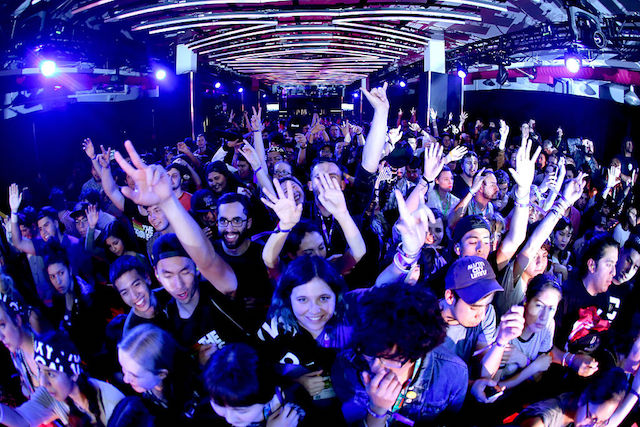 A crowd at SXSW. (Photo by Jonathan Leibson/Getty Images.)

In a contract sent out to artists, Austin-based music festival South By Southwest says international acts may be referred to "immigration authorities" if they participate in any "public" or "non-sanctioned events."

Felix Walworth of Brooklyn-based act Told Slant set off the wave of inquiries and outrage when they tweeted a photo of the contract they received regarding their first official SXSW appearance.

In what looks like an effort to curb unofficial performances, SXSW dangles the possibility of deportation, writing that “accepting and performing at any non-sanctioned events may result in immediate deportation, revoked passport, and denied entry by US Customs Border Patrol at US points of entry.” Stereogum reports that the clause in question is not a new addition, but there’s no arguing that it takes on a grimmer reality under Trump’s presidency.

After looking through this contract sent to me by sxsw I have decided to cancel Told Slant's performance at the festival pic.twitter.com/rI2Xv0duJl

Unofficial shows are the backbone of SXSW and it’s not uncommon for bands to make the most of their time in Austin by performing multiple times throughout the week-long event.

The clause comes as even more of a shock considering SXSW’s collaboration with international outreach group Tamizdat on “ContraBanned: #MusicUnites,” a showcase that highlights artists from the diaspora communities of the nations banned by the January 27th Executive Order. Furthermore, Austin has been considered a sanctuary city, a claim that no longer has legs to stand on with this development.

Threatening to call ICE on artists on a tourist visa is unacceptable. It's colluding with an administration that's hunting down immigrants.

The Austin Chronicle spoke to SXSW CEO and co-founder Roland Swenson, who issued an apology yet maintained that the image of the contract posted by Walworth is out of context.

We’ve had these restrictions in the agreement for about five years and never had to enforce them. It’s intended for someone who does something really egregious like disobeying our rules for pyrotechnics, starts a brawl in a club, or kills somebody. You have to really fuck up for us to do this stuff. What people don’t understand is that we’re already talking to immigration about all these bands. Most of these bands are here because we sort of sponsored them. So if somebody did something bad enough that we had to enforce this part of the contract, we would probably be obliged to notify immigration that ‘Hey these guys are trouble,’ but we’ve never had to do that.

SXSW has been vocal in its opposition to President Trump’s Travel Ban and is working hard to build a coalition of attorneys to assist artists with issues at U.S. ports of entry during the event. We have artists from 62 countries from around the world performing and have always supported our international music community. We have never reported international showcasing artists to immigration authorities.

We were sorry to learn that one of our invited performers chose to cancel his performance at this year’s SXSW Music Festival due to a misunderstanding of our policies regarding international artists.

We understand that given the current political climate surrounding immigration, the language that was published seems strong. Violating U.S. immigration law has always carried potentially severe consequences, and we would be remiss not to warn our participating acts of the likely repercussions.

Language governing SXSW’s ability to protect a showcase has been in the artist Performance Agreement for many years. It is, and always was intended to be, a safeguard to provide SXSW with a means to respond to an act that does something truly egregious, such as disobeying our rules about pyrotechnics on stage, starting a brawl in a club, or causing serious safety issues.

What it comes down to is the blatant inequality of the ramifications of the clause for U.S. artists and their international counterparts. While citizens could potentially get their housing canceled and their badges revoked, international artists would get ICE called on them and potentially ruin their chances of returning to the United States.

The response to the clause has been swift. Activist and Downtown Boys member Victoria Ruiz has started a petition "demanding that SXSW remove this clause from their contract and stop threatening bands with immigration investigations and deportation."

if ur playing/going/writing about #sxsw plz dm me. i need yr help with a petition against their threats against international artists.

“Can our first step toward coalition as artists with radical politics be to cancel all our official showcases at SXSW?” writes Walworth, following his original tweet. “I’m serious just do it.”