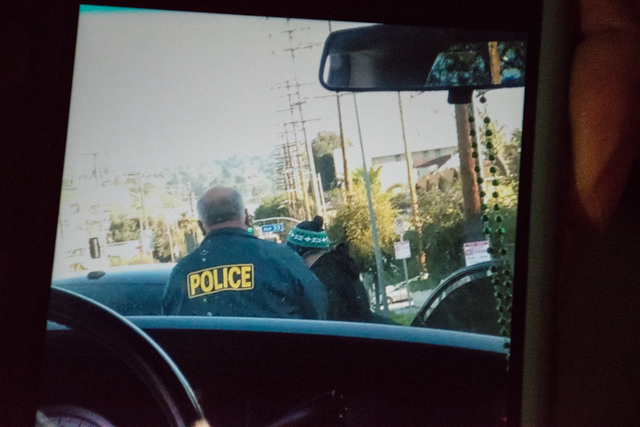 A video taken by Romulo Avelica-Gonzalez's 13-year-old daughter during her father's arrest plays on her cellphone. (Photo by Julia Wick/LAist)

Romulo Avelica-Gonzalez, an undocumented father of four U.S.-born children, has lived in this country for more than 20 years. On Tuesday, he was dropping his daughters off at school, as he does every morning. He and his wife had already dropped off their 12-year-old daughter and were headed to drop off her 13-year-old sister next when Avelica-Gonzalez was detained by immigration officials a block from his daughter's school in Highland Park.

"My dad always takes my little sisters to school," Jocelyn Avelica, Avelica-Gonzalez's 19-year-old daughter told LAist. Jocelyn, who was at work at the time, said that the car that detained her father had been following him since he had left his house that morning.

"My dad dropped off my first sister and then when he turned around, they turned on their light," Jocelyn said. "My dad was really scared. He didn't want to pull over, but he did. As soon as he did, one car went in front of his truck and one in back of his truck. They took him out and they arrested him. My little sister was still in the car, she's 13. My mom was also there." Avelica-Gonzalez's wife and 13-year-old daughter watched as ICE officials, wearing jackets that just said "POLICE," arrested him.

This video, taken by Romulo Avelica-Gonzalez's 13-year-old daughter, shows what it was like inside the family's car during the arrest:

"If we allow this as a community to continue, then we create an environment where children are afraid to go to school, parents are afraid to drop their children off at school, and people are living in a culture of fear," Emi MacLean, an attorney with the National Day Laborer Organizing Network (NDLON) told LAist.

MacLean's organization helped get the word out about Avelica-Gonzalez's detention, and mobilize a rapid response network to make calls to ICE officials advocating that he not be immediately deported. On Tuesday night, they received word that Avelica-Gonzalez had been granted a temporary stay, meaning he would not be immediately deported and would instead be moved to a different detention center. "We won a short victory today—it's not the final victory," she said. "The struggle in his case, and in many other cases, is going to continue."

Avelica-Gonzalez is originally from Nayarit, Mexico. He's 48 years old, works as a food preparer at a Mexican restaurant and has lived in this country for more than half his life. His four daughters are Americans. Jocelyn, his 19-year-old daughter, describes her father as a hardworking man. "He always wanted the best for his family. He would do anything for his family," she said.

He also has a nearly decade-old DUI conviction, and "apparently a conviction from over 20 years ago related to having bought a car that he did not realize had a registration sticker on it that did not belong on the car," according to MacLean. 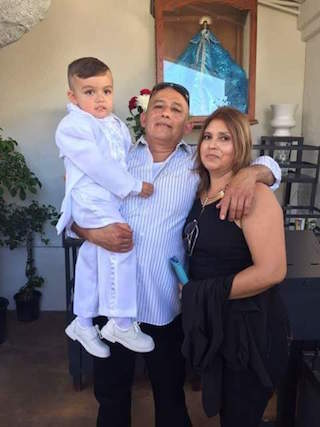 "Those are his criminal convictions in over 25 years in this country. And ICE is saying this is why he's a 'bad' immigrant and should be deported," MacLean explained. "Basically what ICE has told officials is that this man has prior convictions, as a way of essentially throwing him under the bus."

Avelica-Gonzalez's situation painfully illustrates the false dichotomy of "good immigrants" and "bad immigrants." Avelica-Gonzalez may have a previous criminal record, but he is by no means a danger to anyone. His deportation, however, would rip apart the lives of his four American citizen daughters, and the fear created by his arrest is already rippling outward into the community.

Ricardo Mireles, executive director of Academia Avance, a charter school in Highland Park attended by two of Avelica-Gonzalez's daughters as well as several of their cousins, spoke to LAist about how the detention affected the school. Mireles learned of the detention when Avelica-Gonzalez's eighth grade daughter arrived at school in tears. "The irony," he said, "is that the 8th graders went to the Museum of Tolerance today."

"Everybody on November 9th was afraid," Mireles said." But it was fear of what was not known. Today was the first time it was directly one of our families, so it just made real the fears that were already there." 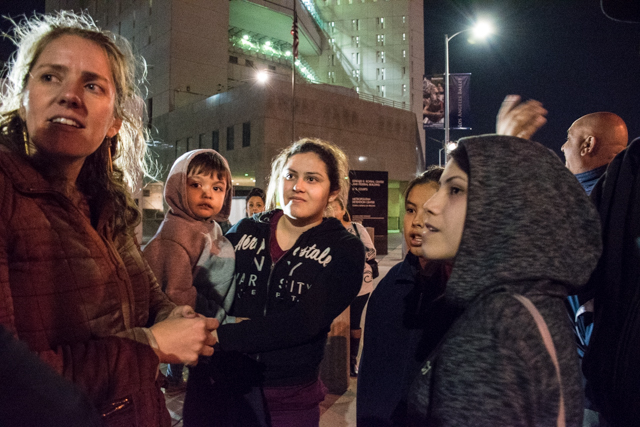 NDLON's Emi MacLean with members of the Avelica-Gonzalez family on Tuesday. (Photo by Julia Wick/LAist)

Diana Avelica, Avelica-Gonzalez's 18-year-old niece, was among those gathered outside of Metropolitan Detention Center on Tuesday night, alongside her cousins and activists from NDLON. Diana also attends Academia Avance, where she is student body president. Standing in her school uniform, she explained the father-like role her uncle has played in her life. "Because my mom is a single mother, he has always been that dad figure for me," she said, describing how he supported her and attended school award ceremonies.

Diana said that she was in class when Mireles, the school's executive director, came to get her. "I thought it was just going to be that he needed help to organize something, or do something else," she said. "But he told me sit down and asked if I had heard the news. Obviously, I didn't know anything. He told me that my uncle, he was detained by ICE agents. And I was shocked at first. I told him, 'No, he's okay, he's okay.' I was in shock."

Mireles said that he had spoken directly with an ICE public affairs agent, who told him that the agency was "taking precautions to stay away from schools, and recognizing the fear that it creates," according to Mireles. "So, if we look at the specifics of today, [immigration authorities] did follow the family to the school, and did not act until after the first daughter had been dropped off," Mireles explained. "I think what they didn't realize was that now the family was going to a different site—same school but different site—for the eighth graders, and that she was also in the car. So, it happened on the same street as the school, but to be clear it wasn't at the school site."

However, what Mireles—and many others—have identified as especially problematic about the situation is that the ICE officials who detained Avelica-Gonzalez were in unmarked cars, and they were wearing jackets that said "police." Last week, city leaders including Mayor Eric Garcetti released a letter urging ICE agents to stop identifying themselves as "police"—a practice that is officially legal.

"We have worked for decades in L.A. to build stronger trust between immigrant communities and law enforcement. Misleading practices like these undermine the good faith and spirit of cooperation that is so integral to our city's safety and security," Mayor Eric Garcetti said in a statement to LAist.

"I just want other people to know, don't let your family be out as much, because we can't be safe," 17-year-old Lovette Valdivia, a classmate of Diana's and student body vice president at Academia Avance told LAist. "We're supposed to be in America, but with this new president, it's scary... It's a nightmare. It's not the American dream."

Now, the Avelica-Gonzalez family must wait to see if their husband and father, who remains detained, will be deported from the country where he has lived for a quarter century. 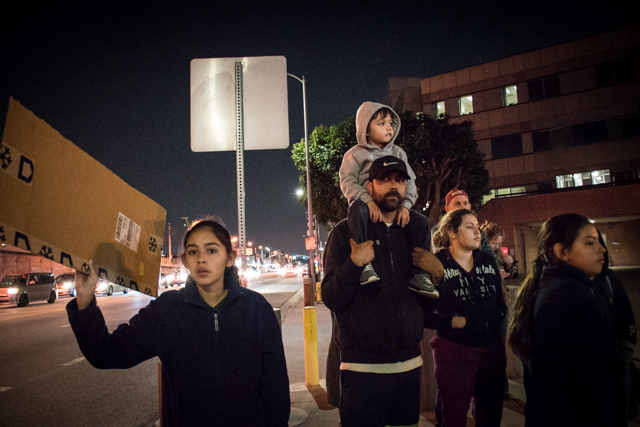 Update [1:45 p.m.]: Romulo Avelica-Gonzalez's family will be holding a vigil outside of Hollenbeck Police Station in Boyle Heights at 4 p.m. on Thursday. They are requesting certification from the LAPD to support their legal motions for him to gain a visa to remain in the country.