What Eliminating The National Endowment for The Arts Would Mean For L.A. 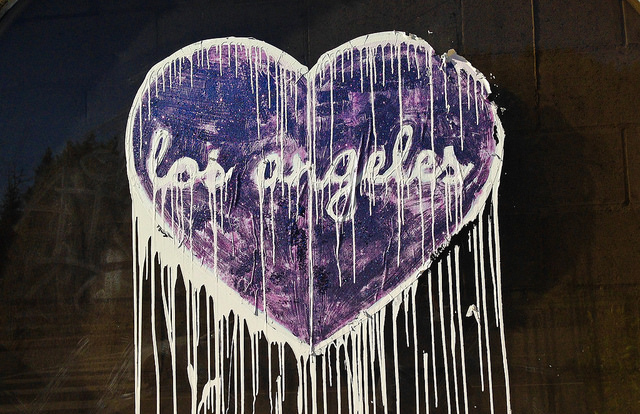 Antigirl's "Heart of Los Angeles," painted on a window on Pico Boulevard near Century City. (Photo by Chris Goldberg via the LAist Featured Photos pool on Flickr)

Creating a hierarchy of federal agencies at risk of elimination is a futile task, but for Los Angeles the elimination of the NEA would have grave consequences on the city’s cultural resources and programming. Though it might seem like a far-flung federal agency when compared to the stakes at risk with the rumors of the Environmental Protection Agency’s elimination, NEA funds have been a backbone to much of L.A.’s artistic prowess, bringing countless exhibits, museums, and programs to life.

The Trump administration has been slow to tackle the national deficit, but with the confirmation of former representative and republican hardliner Mick Mulvaney to budget director on February 16, changes are nigh. And if the swiftness of his executive orders are of any indication, they’ll be enacted fast; the final list of soon-to-be eliminated agencies will be finalized by March 13.

After campaigning under grand yet vague promises to undertake the national deficit, Trump announced plans to reduce spending by $10.5 trillion and cut the deficit by $9.2 trillion over 10 years through the allocation of funds from terminated government agencies. According to The New York Times, Trump’s budget cuts closely mirror a document (titled “Blueprint for Balance: A Federal Budget for 2017”) that was produced in February 2016 by the Heritage Foundation, a conservative think tank. That document calls for the elimination of both the NEA and NEH, arguing that they are unnecessary because private donations to the arts and humanities far exceed what is distributed by the endowments.

In the essay “What ‘Things Going Wrong’ Can Look Like,” writer Yonatan Zunger outlines the likelihood of class warfare under Trump’s presidency. “I expect to see tremendous pressure brought to bear immediately,” he writes. “All research funds for research which either goes against some policy objective of the administration, or which sounds too aligned with ‘liberal elites,’ will be targeted first.”

Zunger is correct in his predictions. The Trump administration’s proposed elimination of the NEA is a veiled attack, one that misinterprets what the agency does and further divides the left and right. “Blueprint for Balance” lays it out clearly: “Taxpayers should not be forced to pay for plays, paintings, pageants, and scholarly journals, regardless of the works’ attraction or merit. Actors, artists, and academics are no more deserving of subsidies than their counterparts in other fields; the federal government should refrain from funding all of them.” 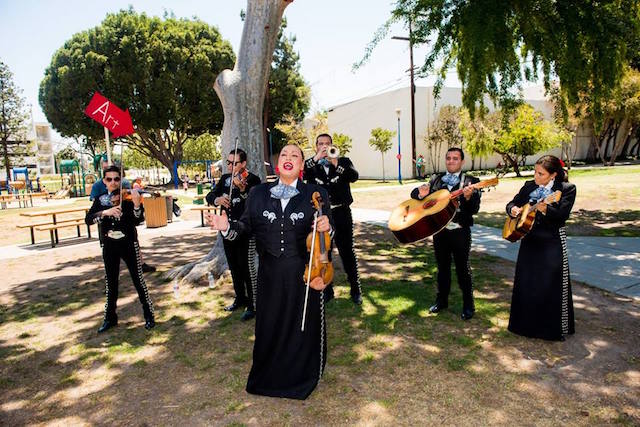 The scene at the West Hollywood's 2016 One City One Pride Arts Festival, which has received NEA funding in the past. (Photo courtesy of Weho Arts via Facebook)

The NEA received $148 million in 2016, but perspective is paramount when analyzing federal budgets. Even though the budget million sounds like— and absolutely is— a massive sum of money, it would only cut out .01% of the government’s spending, which effectively does nothing to solve the nation’s glaring budget issue.

The Washington Post created an excellent visual analogy to explain how inconsequential the cuts to the agencies would be:

If you were at Thanksgiving and demanded a slice of pecan pie proportionate to 2016 NEA spending relative to the federal budget, you'd end up with a piece of pie that would need to be sliced off with a finely-tuned laser. Put another way, if you make $50,000 a year, spending the equivalent of what the government spends on these three programs would be like spending less than $10.

The NEA’s effect on Los Angeles alone has been profound. The funds provide crucial capital for museum training, museum studies, and curation as well serving as a stimulus to museums, enabling them to be more ambitious in pursuing artistic programming that in turn enrich the community.

Despite its modest budget, the NEA “has found ways to make the money work with outsized effectiveness and efficiency,” as former NEA director and current California poet laureate Dana Gioia explained in a recent L.A. Times op-ed. “It makes thousands of small grants to nonprofit organizations—on average 2,100 a year. Each grant requires the recipient to raise matching local funds—often at a ratio of two or three local dollars for each federal one,” Gioia explained. “So the NEA mostly serves as a catalyst for local groups to raise private and state money to serve their own communities.”

A still from a production of Native Voices at the Autry, which has received funding from the NEA and is the only Equity theatre company devoted exclusively to developing and producing new works for the stage by Native American, Alaska Native, and First Nations playwrights. (Photo via IndieGogo)

In 2015, the NEA provided hundreds of thousands of dollars in grants to the city that were used throughout the greater L.A. area, many of which aided low-income neighborhoods with artistic pursuits that would would have otherwise perished without the agency’s grants. Underprivileged teens are often beneficiaries, with programs like Art High—which make after-school visual and media arts education, arts experiences, and mentorship readily accessible to the Northwest Pasadena and East Los Angeles community—being made possible through the agency. Furthermore, the historic and underserved neighborhoods of Hollywood, East Hollywood, Koreatown, Westlake, and Pico-Union gained public art, performing arts programming, and multi-media installations, and more, all through the Department of Cultural Affairs use of its “Our Town” grant.

Other vital L.A. arts organizations that have received NEA grants in the past include the Youth Orchestra of Los Angeles at Heart of Los Angeles, 826LA, Venice Arts, and KCET, among many, many others.

Moreover, the NEA plays a major role in preserving and celebrating L.A.’s cultural communities. Grants have provided for support of Native Voices at the Autry National Center of the American West Los Angeles, folk and traditional arts programming at the annual Festival of Philippine Arts and Culture, as well as beginning to advanced after-school and weekend apprenticeships in Mexican mariachi.

“More important than what it is that the NEA would be under any specific president or administration is the fact that it exists,” explains Director of the Fisher Museum of Art and Professor of Art History at USC Selma Holo to LAist. “I think [cutting the NEA] would be a huge loss and it would be a real statement that the federal government does not think that we are doing something that is critically important to society.” 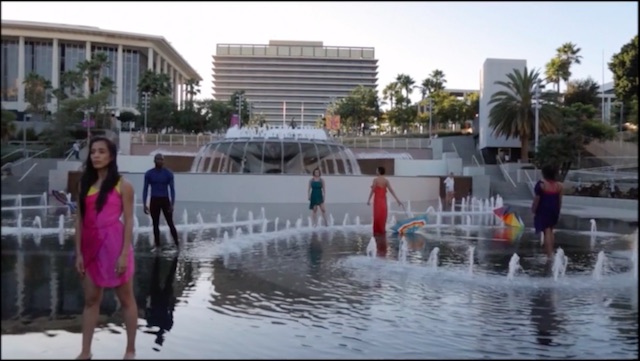 A still from CONTRA-TIEMPO's "Agua Furiosa," which received NEA funding to support its creation and presentation. (Image via Vimeo)