City Leaders Demand That ICE Stop Identifying Themselves As 'Police' 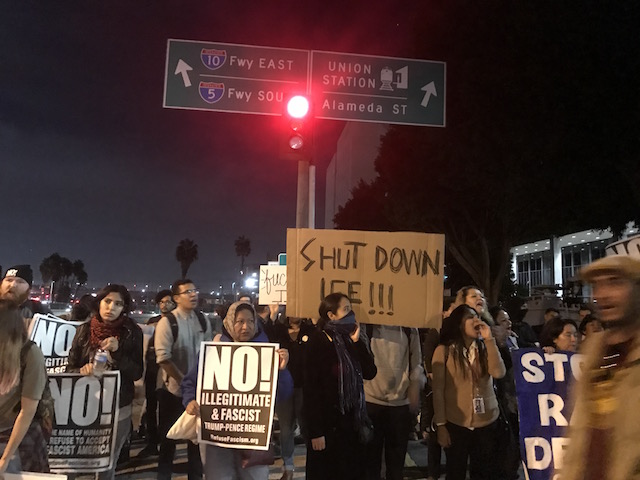 Los Angeles City officials released a letter on Thursday urging ICE agents to stop identifying themselves as "police" at the doors of residents—a practice that is officially legal.

The letter, signed by Mayor Eric Garcetti, City Attorney Mike Feuer, and Councilmember Herb Wesson, said that in "Los Angeles, the term 'police' is synonymous with the Los Angeles Police Department." One of the concerns, then, is that residents maybe be coaxed into thinking they're dealing with local police, rather than federal agents. This may make it more likely for residents to allow the agents inside their homes; without a warrant, ICE agents may not enter and search a residence, but they can walk in once an adult gives consent.

Officials say that a consequence of the practice is that it may strain a community's trust in local law enforcement. The letter says that the LAPD and the City Attorney's office "have worked to gain the trust, respect and cooperation of all our city's residents," adding that, "when ICE agents targeting immigrants identify themselves only as 'police' officers, they undermine decades of this work, eroding public safety in our city."

The LAPD, it's worth noting, operates under Special Order 40, a department mandate that prohibits an officer from asking about an individual's immigration status.

Speaking with LAist, Feuer said the matter is also one of public safety, as it may lead to crimes going unreported. "We've worked to engender trust and cooperation from immigrant populations," said Feuer. "And whether a person is documented or undocumented, we encourage them to come forth as a witness when a crime has occurred."

"With the turbulence that we're living in right now, the last thing we need is to send immigrants who may be undocumented into the shadows," he added. "These are not abstract concerns. When crimes go unreported, our city as a whole is less safe."

The letter comes on the heels of an L.A. Times article focusing on a video released by ICE—the footage shows agents approaching a residence and introducing themselves with, "Good morning, police." Once a man opens a door, an agent says, “Good morning, how you doing? I’m a police officer. We’re doing an investigation."

Joel Rubin, who authored the article, told NPR that "technically speaking, the ICE agents are law enforcement officers, but certainly when somebody hears, police - open up, or, I'm a police officer, they're not thinking immigration." He added that "it's pretty common. It is sort of the default language that ICE agents use when they knock on the door."

According to the Times, the act of identifying oneself as police is included in ICE training manuals. “There is something fundamentally unfair about ICE exploiting local and state policies that are trying to improve public safety by promoting immigrants’ trust in law enforcement,” Frances Miriam Kreimer, senior attorney at Dolores Street Community Services in San Francisco, told the Times.

ICE stresses that the practice is not illegal. In a statement, the agency states that, "As a standard practice, special agents and officers with U.S. Immigration and Customs Enforcement (ICE) may initially identify themselves as 'police' during an encounter because it is the universally recognized term for law enforcement and our personnel routinely interact with individuals from around the world." The statement adds that agents wear uniforms and jackets that display "ICE" on it, which "indicate the specific law enforcement agency being represented."

Certainly, an examination of ICE practices has taken on a much more urgent nature as of late. Earlier this month, more than 160 individuals were detained by ICE agents in sweeps that occurred across six Southland counties. And earlier this week, the Department of Homeland Security unveiled new immigration enforcement guidelines that widened the pool of people who may be deported. While President Trump's rhetoric has focused on the deportation of "criminals," the term is now broadened to include any person in the U.S. who doesn't have a visa. "All of those in violation of the immigration laws may be subject to enforcement proceedings, up to and including removal from the United States," states a fact sheet released by the DHS.