Confusion Remains Over Garcetti's Position On L.A. As A Sanctuary City 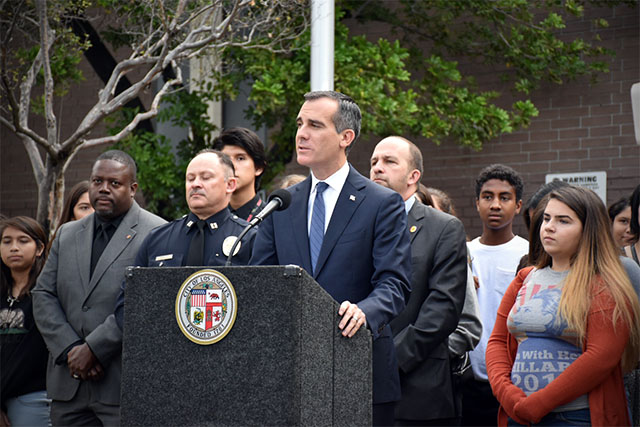 In week five of Donald Trump's America, it's difficult to go a few hours without hearing the term "sanctuary city." Trump signed an executive order to block federal funding to so-called sanctuary cities five days after taking office, and discussion of sanctuary cities has only increased in the ensuing weeks with news of ICE raids, and increased immigration enforcement.

Here in Los Angeles—a land often hailed as a "sanctuary city" in headlines—confusion on the city's actual sanctuary status also reigns. Many Angelenos would be surprised to learn that Mayor Eric Garcetti has never actually declared Los Angeles a sanctuary city. Instead, the mayor has studiously avoided using the term and, as recently as January 27, told NPR that "we've never declared ourself a sanctuary city; I'm still not sure what one is."

Loosely defined, a sanctuary city is a municipality where local officials don't cooperate with federal immigration authorities. What cooperation actually means varies widely from jurisdiction to jurisdiction; despite its ubiquity, the term has no actual legal meaning. "Maybe it's defined in the bible, but other than that, it's not defined in law anywhere," Niels Frenzen, director of the USC Gould School of Law Immigration Clinic, told LAist. That said, the term has still become the lingua franca for describing a specific relationship (or lack thereof) between local and federal authorities, as well acting as a rallying cry for activists on both sides of battle lines across the country.

The closest thing Los Angeles has to any kind of legal sanctuary designation is Special Order 40, which is an LAPD mandate, not a city law. Special Order 40 dates back to 1979 and essentially prohibits LAPD officers from asking about—or acting on—an individual's immigration status. Both Garcetti and LAPD Chief Charlie Beck reaffirmed L.A.'s commitment to Special Order 40 in the days after the election.

Special Order 40 prevents LAPD officers from acting as immigration agents in everyday encounters, but it doesn't mean that the city has any sort of blanket prohibition on cooperating with immigration authorities. In fact, as Garcetti explained in a statement issued in January just after Trump's executive order on sanctuary cities, "The idea that we do not cooperate with the federal government is simply at odds with the facts. We regularly cooperate with immigration authorities — particularly in cases that involve serious crimes — and always comply with constitutional detainer requests."

Garcetti's hedging on the term stands in stark contrast to the words of other big city mayors, like Rahm Emanuel, who has repeatedly pledged that Chicago "will always be a sanctuary city."

"Obviously, people are drawing those comparisons: why is City A doing this, and Los Angeles not doing it? Especially when L.A. is really at the epicenter in terms of our immigrant population," Frenzen told LAist.

One could certainly see why the mayor might be fearful about potentially jeopardizing Los Angeles' federal funding (last year, the city received upwards of $500 million in federal funds to support a wide variety of programs), although many questions remain about how much Trump could actually restrict in said funding. "You can take away funding from a specific program if you don't adhere to the requirements of that program, but we don't have funding that is for the co-cooperation of our immigration federal officials and our local officials," as Garcetti told CNN in January.

Frenzen, who is a law professor, also posited that a mayor calling his town a sanctuary city wouldn't actually have any legal impact on the federal funding struggles. "I don't think that using the word sanctuary has any adverse legal implications on the city," Frenzen said. "Does it make it a political target because you're going to be more visible in terms of taking political positions against the Trump administration? That's a political issue, not a legal issue."

In early February, Garcetti took part in a press conference at Los Angeles International Airport to welcome back Ali Vayeghan, the first traveler to reenter the U.S. after being turned away under Trump's travel ban. During his statement, he referred to L.A. as "a city of sanctuary, a city of refuge,” which is the closest he's ever come to calling Los Angeles a sanctuary city. The ACLU of Southern California quickly jumped on the comments, putting up a blog post celebrating that the mayor had "finally stood with the people of Los Angeles declaring that our city must be a sanctuary city."

That doesn't seem to have been exactly the case, though. We reached out to the mayor's office to clarify whether he considered his comments at LAX to be an official declaration of L.A. as a sanctuary city, and if not, if his office could clarify what his official position was. A spokesperson declined to directly answer those questions, but instead gave us a statement from the mayor that was very similar to what he said at the airport, minus the word "sanctuary." Here's the full statement from the mayor's office, which was issued on February 8:


The strength of our city's commitment to immigrants is measured by our actions, not labels. Since becoming Mayor, I've re-established the Mayor's Office of Immigrant Affairs and put a concentrated focus on programs that help further integrate immigrants into the social, cultural, and economic fabric of our city. Los Angeles will continue to be a city of protection and refuge because I am committed to doing everything possible to make all Angelenos feel safe, secure and welcome in our community.

In the intervening weeks, pressure to officially declare Los Angeles a sanctuary city has intensified. On Saturday, several thousand Angelenos took part in an immigration march that included the declaration of L.A. as a sanctuary city (along with taking concrete steps to actually back up that declaration) as one of its express aims. In a statement issued the day before the march, organizers said they were "highly critical" of Garcetti's "weak and conflicting messages regarding Los Angeles being a sanctuary city."

"Garcetti is trying to walk a fine line between local constituents who want a hard line from the mayor and those who do fear the loss of federal funds to the city," Christian Grose, a political science professor at USC and director of the university's Political Science & International Relations Ph.D. program, told LAist.

Given that Los Angeles is one of the most vocally pro-immigrant and anti-Trump cities in the nation, Grose posited that Garcetti's reluctance to take a harder line "could cause some backlash amongst critics." The mayor is running for reelection on March 7 in a race where victory is all but guaranteed, so it likely won't hurt him there. "He may be thinking how the use of the term could affect him if he runs for higher office, assuming he is reelected as mayor," Grose said.