The 11 Most Instagrammable Dishes In L.A.

If a tree falls in a forest and no one is around to hear it, does it make a sound? If you finish a plate of pappardelle with black winter truffles, but failed to share it with your hundreds of Instagram followers, was the dish actually consumed? Such is the existential quandary of the modern diner.

Adding to the conflict, we may feel abashed at pulling out our iPhone, and yet that bowl of chirashi is begging for a closeup. Do away with your anxieties, we say. The food was prepared with love and care, and the ingredients had gone through some process of alchemy to produce a minor miracle (that's sitting on your plate!). The dish deserves all the adoration it can get, and we prefer to think of Instagram as a way to appreciate a chef's attention to craft. Here, we present you eleven of the most Instagrammable dishes in Los Angeles. Feel free to shoot away.

The posh SLS Hotel in Beverly Hills offers many opportunities to dine on spectacular food, and Culinary Director José Andrés has proven he knows how to make any dish look beautiful. I mean, this is the guy NBC hired to make Hannibal Lecter's kitchen antics look palatable, despite the dubious nature of many of the doctor's ingredients. Beyond the extensive tasting menu at Saam, and the sublime molecular gastronomy feats available via The Bazaar and Tres, there's also the charming Patisserie tucked within The Bazaar. Here, pastry chef Kriss Harvey displays dozens of pretty desserts on a daily basis, each calling to guests from under glass lids.

The bon bons are particularly appealing. Each one is hand-made over the course of three to four days using Valhrona chocolate, and each is delicately designed. Some look like Jackson Pollock paintings, and others come slashed with colors. Flavors include calamansi and peanut, Maria Luisa and yuzu, praline poprock, coconut white chocolate, chestnut honey, speculoos (cookie butter), lemon and milk chocolate, and caramel and crisp pearl. In case you're wondering, yes, the praline popcorn really does crackle in your mouth. — Juliet Bennett Rylah

The SLS Hotel is located at 465 S. La Cienega Blvd. in Beverly Hills. Patisserie and Regalo is open daily from 10 a.m. to 6 p.m.

Stephen Kalt's Spartina is a casual Italian restaurant with a California flair, inconspicuously located on Melrose. It's a comfortable place for low-key dates or a friendly catch-up, and it's ideal for happy hour. From 5:30 p.m. to 7:30 p.m. daily, you can order any pizza for a mere $10. That leads us to a pie that delights when it comes to both taste and visuals: the pizza bianca, which is topped with blossoms of pancetta, cipollini, pecorino cheese and black pepper, plus an egg in the center that spreads as its sliced. It's a flavorful dish, and for $10 you really can't go wrong. — Juliet Bennett Rylah

Tucked into the second floor of the Madang Mall in Koreatown, Somi Somi sells one thing and one thing only: taiyaki sundaes. A taiyaki (sometimes called a bungeoppang in Korea) is a fish-shaped, waffle-esque pastry that typically comes stuffed with red bean paste or ice cream. At Somi Somi, they come filled with red bean paste, custard or Nutella, then stuffed with a generous swirl of soft serve. Flavors include banana, chocolate, milk and green tea, some of which are available as a swirl. The whole thing is then finished with your choice of toppings, which may include cookie crumbles, or cereal, or a fruit garnish. Because they do not skimp on the soft serve, you'll have to be quick to get that perfect Instagram shot before it begins to melt. — Juliet Bennett Rylah 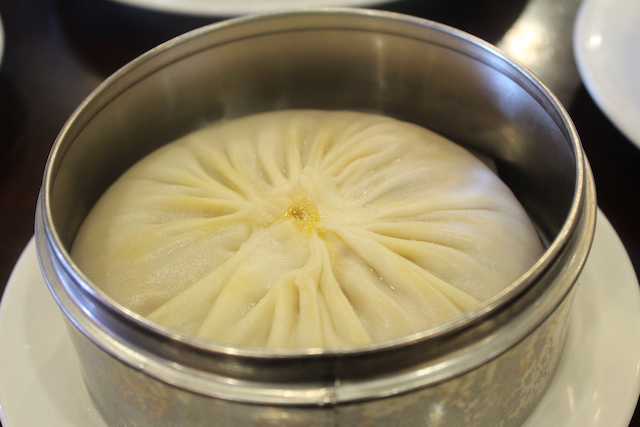 It's not the color, nor the presentation, but the sheer size of the tangbao at Long Xing Ji that makes it a picture-worthy dish. The soup dumpling (if you can call it that) is about the size of a hand with the fingers outstretched. It is so big, in fact, that you're given a neon straw to sip the delectable bounty that's pooled within. The straw doesn't simplify the undertaking much, actually. After you've sipped the soup, your only option is to dig in with a spoon or a pair of chopsticks. The doughy skin will get torn. The remnants of juice will run all over. And you'll chase bits of pork as if you're mining for gold in the Yukon. It was Picasso who said that, "A picture used to be a sum of additions. In my case a picture is a sum of destructions. I do a picture—then I destroy it." The tangbao's appeal, then, comes from the sum of its disintegration. You could also just say it's delicious.

Loved this Dungeness crab chawanmushi (Japanese egg custard) from @michaelssm that was topped with uni and sesame. 💯

Michael's has been around for 37 years and has seen the kitchen talents of chefs like Jonathan Waxman, Nancy Silverton, Sang Yoon and Brooke Williamson. Now, Chef Miles Thompson is at the helm and has just been nominated for a James Beard Foundation Rising Star Chef award. Our picture-worthy order of choice here is the chawanmushi, a savory Japanese egg custard. Michael's version of it is a beautiful, fresh dish consisting of Dungeness crab, uni, pickled ginger sprout, and Japanese sesame. — Juliet Bennett Rylah

Please observe this glorious mess of cheese that is Kendall's Brasserie's French onion soup. Kendall's has been around since 1989, and is often full of guests taking in a fine meal before heading to the opera at the L.A. Music Center. The menu recently received a revamp courtesy of Chef Jean-Pierre Bosc, who hails from Lyon. Bosc infuses the flavors of his hometown into the rustic dishes. The French onion soup comes completely smothered in creamy Comté cheese and served with grilled country bread. — Juliet Bennett Rylah

they say avocado toast is basic... but no one said basic ain't delicious 😉 great 📸 @localemagazine

AVOCADO TOAST AT PAPER OR PLASTIK

Few all-day cafes are holding things down as well and as consistently as Paper or Plastik is. This Mid-City darling excels in coffee and pastries, and has spent several years now ramping up its menu offerings. While avocado toast has quickly become a quintessential L.A. dish, Paper or Plastik adds a personal touch by topping it with prosciutto and a poached egg to make it more filling. They've also dressed the toast with plenty of color to make it camera-ready. — Oren Peleg

I C E 🍓 C O L D || Perfect on a hot sunny day like this ☀️ to make a reservation, please visit our website (katorestaurant.com) or give us a call! 424.535.3041 #katorestaurant #dessert #rose #strawberry #buttermilk #pudding

The exterior of Kato offers no hints that, inside, there'll be a menu of colorful, impeccably composed dishes. But chef Jonathan Yao (an Alma alum) knows that dining is as much a visual experience as it is an oral one. One of the tasting menu's most memorable (re: Instagramable) items is the rose-infused buttermilk pudding—a dollop of thick, tart buttermilk pudding that plays against the more rigid texture of rose-flavored ice shavings. The ice quickly melts after hitting your tongue, yet the thick pudding leaves a sweet, bright, flavor in your mouth. — Oren Peleg

We've got these babes for you and your honey!! House made cardamom cupcakes with white chocolate & vanilla bean cream cheese frosting ❤️

This Sydney import hasn't been in L.A. for more than two years, yet it has already established itself as one of the hippest stops along an already impossibly hip stretch of Fairfax Avenue. Paramount's cardamom cupcakes epitomize the glossy, hyper-stylized look of the cafe. Pair these little treats with a delicious cup of coffee, and enjoy. — Oren Peleg

EVERY ITEM AT GUERRILLA TACOS

Chef Wes Avila is incapable of making a bad looking dish. Hand him a bag of Totinos and he'll whip up something that resembles the hanging gardens of Babylon.

We couldn't pick a single item that stands above the rest, partly because they're all so gorgeous, and partly because the menu is in constant flux (the offerings depend on what the chefs were able to get fresh from local vendors). The sweet potato taco, a mainstay on the menu, is like a mini-bouquet of scallions, feta cheese and, yes, sweet potato. On occasion you may run into a chanterelle mushrooms quesadilla, or a tostada piled with scallops, micro shiso, green apples, and Marcona almonds. Uni, in all its golden glory, is a common addition.

The composition of these minor masterpieces shouldn't be overlooked; it would be easy to stir a hodgepodge of foraged items and present it as eye-candy, but Avila and company go a step further. The layering of the tacos suggest a three-dimensional plane, one that's analogous to the heady sensation that goes into every bite.

You can find the Guerrilla Tacos truck here.

Every single dish served at Barton G.'s was made for social media. Each one is presented with increasing spectacle. Their "Below the Belt" cocktail is served beneath an oversized boxing glove. The "Rake and Ho Garden" salad is a flavorful mixture of kale, herbs, quinoa, truffles and grains served in a small wheelbarrow with gardening tools and seed packets. "The Great American Steak" is your choice of a 16 ounce boneless ribeye or an 8 ounce Angus filet mignon, each served on a wooden board with bone marrow butter and truffled steak fries, all topped with a towering three-foot fork looming over the dish. Perhaps even more awe-inspiring are the desserts, which come as their own tableaus. They're meant to serve parties of six, and each one is nothing short of obnoxious. The "Dolla Dolla Bills Y'All" is a chocolate ganache tart with dulcet de leche and meringue, which appears to be a brick of gold. A waiter in a welder's helmet will come to your table and blowtorch the brick until the rich interior of the dessert is revealed. It comes served on a tray with a giant plastic hundred dollar bill, a wad of fake cash and gold chocolate coins. Among the strangest is the "Rubber Ducky...You're the One." A passion fruit-filled white chocolate duckling sits on top a coconut angel cake lined with milk chocolate, topped with piles of whipped coconut cream. What this looks like is a little duckie floating in a wooden basin full of suds. An adjacent tub, also filled with whipped coconut cream, contains a fountain in the shape of a spigot that continues to cycle water the entire time the dish is on your table. The staff will bring it out with a lit sparkler, so don't expect to dine inconspicuously.

Is Barton G. gimmicky as hell? Totally. But the food is actually delicious and well-proportioned and the staff seems like they're having fun, so you might as well give in to the pageantry and enjoy yourself.