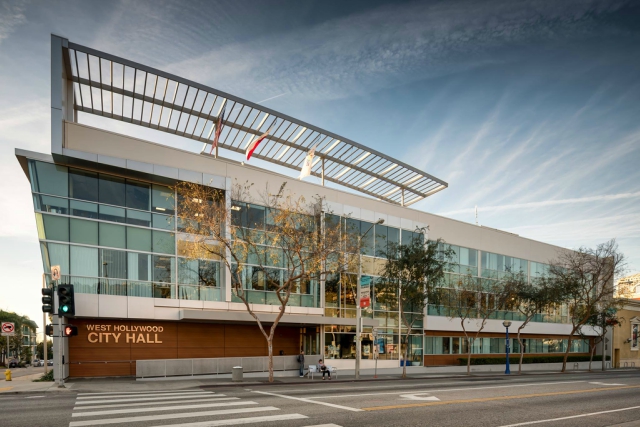 West Hollywood Mayor Lauren Meister wants to make sure the city never does business with President Donald Trump in any way. At a city council meeting scheduled for Tuesday, February 21, Meister will ask that West Hollywood be barred from conducting business with any company or fund in which Trump or his trust are invested.

“When I was elected, I took an oath to support and defend the Constitution of the United States," Meister began in an email to WEHOVille. "The Emoluments Clause of the Constitution prohibits POTUS from receiving any benefits outside his or her salary. This item prohibits the city from being an accessory to any potential violations of the Emoluments Clause. Further, the city created a working group to respond to potential policy changes from the new administration that are directly in opposition to the city’s core values. Think of this item as the city putting its money where its mouth is.”

In addition to prohibiting dealings with Trump businesses, the mayor will also request that the city enact a similar ban on business with Wells Fargo bank given its investment in the Dakota Access Pipeline.

Earlier this month, it was reported that UCLA (and the rest of the UC system) would be cancelling nearly half-a-billion dollars worth of contracts with Wells Fargo in a similar protest of the bank's ties to the Dakota Access Pipeline.

"With the primary making its way to California, as West Hollywood's Mayor, I want to make very clear that your campaign of violence and intimidation is not welcome in our City," Horvath wrote. "I demand that you renounce calls to violence and consider the role you play in shaping public discourse, specifically with the words you choose and the behavior you exhibit and encourage."

"The mayor wants the council to start this discussion," Lisa Belsanti, communications director for the city of West Hollywood, told LAist of Miester's upcoming proposal. She adds that the mayor's proposal is step one of a two step process. If the council approves the mayor's request, city staff will have 30 to 60 days to return to the city council with a list of businesses under consideration for the ban. From there, step two of the process will be deciding how the city will officially interact with any or all of these businesses.

"Right now, the mayor is asking permission by her colleagues to put staffers' time and resources into this," Belsanti added. The final position taken by the city council "can be broad, or as narrow as 'no staying at Trump hotels.'"

Tuesday's city council meeting will begin at 6:30 p.m., and can be live-streamed here.