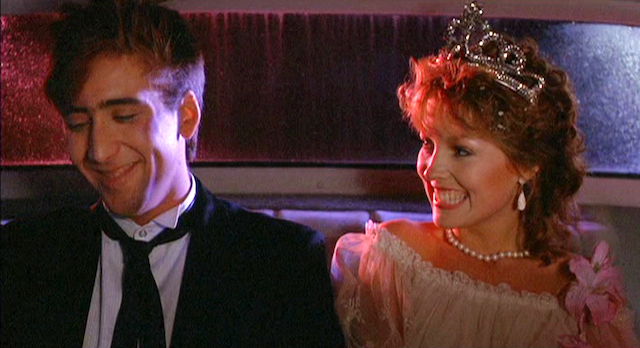 A photo of then-18-year-old Nicolas Cage's photo sat atop of the "reject" pile as Martha Coolidge and her producers struggled to cast the male lead. Not finding what she wanted with all the young men that had come in to try out for the role, Coolidge walked over to the pile and grabbed the top photo and said, "Please don't bring me any more pretty boys, bring me somebody who looks like this." The next day, Cage was brought in by casting director Annette Benson, and Coolidge determined she had found the perfect lead for her film Valley Girl. It would be Cage's first lead role.

In 1982, producer-writers Andrew Lane and Wayne Crawford cranked out the script for Valley Girl in ten days, wanting to cash in on both the wave of raunchy teen sex comedies brought on by Porky's and the introduction of "Valspeak" to the national consciousness by Frank and Moon Unit Zappa's song "Valley Girl." Zappa unsuccessfully sued to halt production of the film. As if, Frank!

Coming from the Rhode Island School of Design and NYU, Coolidge was transitioning away from her early experimental feminist documentaries and wanted a go at it in Hollywood. "I always felt that I was not avant-garde," she later told The Boston Globe. "I make accessible movies, so I should go to a community where that's valued instead of not-necessarily-respected."

A three-week shoot with a budget of only $350,000, Valley Girl was a Romeo and Juliet story that pit the suburban landscape of the Valley against the grungy world of Hollywood. The fresh-faced Deborah Foreman played the titular role as Julie, though of Foreman and Julie's circle of friends, only one of the actresses was a true-blue "Valley girl"—Heidi Hollicker, who played Julie's best friend Stacey. Elizabeth Daily, who played Loryn, imagined herself as a "Malibu Valley girl," thus leading to the drawl she speaks with in the film.

The film establishes its Valley bonafides by opening with the girls going on a shopping spree at the mall (the Del Amo Fashion Center in Torrance standing in for the Sherman Oaks Galleria, due to budget constraints) and chattering over a food court lunch, filling the conversation with the requisite "You know fersher" and "Totally gnarly." Lane and Crawford said they "hid behind palm trees" at the Galleria to eavesdrop in on conversations in order to capture the essence of Valspeak. 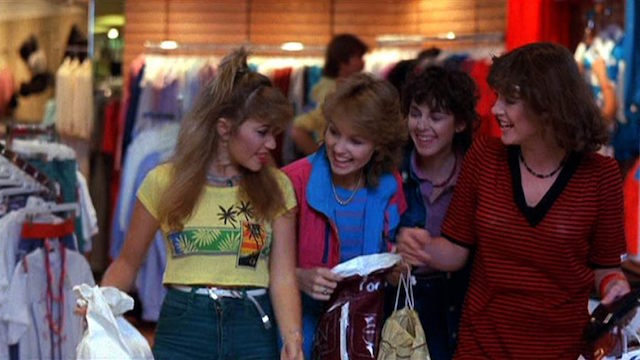 While a B-movie in spirit—with the exaggerated Valley girl accents and the stipulation that bare breasts had to be shown four times during the movie—Coolidge injected a life and depth into Julie, who could have simply been the materialistic ditz caricature from the Frank Zappa song. "I would not settle for cliché female characterizations," she told author Christina Lane for the book Feminist Hollywood: From Born in Flames to Point Break. "We hired actresses who were more interesting. We pursued relationships which were deeper. And we took material which was, for Valley Girl, simple, and we deepened it."

In Valley Girl, Julie's motivations become both the fulcrum and the source of conflict in the film. Coolidge inverts the male gaze by turning Cage's Hollywood punk Randy into her carnal object of desire. While on the outs with her preppy boyfriend Tommy (Michael Bowen), who's "got the bod, but his brains are bad news," she catches a glimpse of Randy one day at the beach, shirtless and sporting triangular-shape chest hair that Cage himself shaved. Through a series of glances and suggestive biting and licking of her lips, she makes the first move. Coolidge also upends our expectations of Julie, who we first see on the aforementioned shopping spree. Under the hands-off tutelage of her hippie parents (Colleen Camp and Frederic Forrest, who Coolidge knew from her days at Francis Ford Coppola's Zoetrope Studios), Julie acts as the agent of her own motivations, torn between peer pressure and her own desires.

Randy and Julie later ditch the house party they both find themselves at, making their way to a punk club in Hollywood. It's here the Valley vs. Hollywood divide becomes articulated in the film, if a bit exaggerated. "This is the real world!" Randy says to Julie as the Plimsouls perform on stage. "You're like her and all the rest of her friends," he continues, pointing at Stacey, who has unwillingly come along for the ride. "You're all so fucking programmed!"

Despite this cultural rift, Julie and Randy share their first kiss as the Plimsouls play "A Million Miles Away," a song that became a minor hit as a result of the film. They, along with The Knack, became the biggest success stories of L.A.'s power-pop scene. It was also from its use in Valley Girl that another song became an enduring hit: Modern English's "I Melt With You." In fact, the Valley Girl soundtrack was so loaded with so many familiar artists of the era (The Psychedelic Furs, Sparks, Men At Work), that music rights alone made up the bulk of the film's total budget at $250,000.

Despite its modest beginnings, Valley Girl became a surprise hit at the box office, and was warmly received by critics. Roger Ebert, "disgruntled and weary" after a string of "Sex-Mad Teenager Movies," took a liking to the film, writing in his review, "One of the nicest things about this movie is that it allows its kids to be intelligent, thoughtful, and self-analytical." It debuted at #4 on opening weekend and eventually grossed over $17 million.

Aside from launching Nicolas Cage into superstardom, Valley Girl hasn't quite left the impression that, say, Cameron Crowe's Say Anything... (which it is paired with at the New Beverly Cinema for three nights beginning February 15), had, or the John Hughes films of the same decade, perhaps because Valley Girl is hampered by the cultural specificity of its Los Angeles setting. But its optimistic message of individuality and coming together in spite of our differences, exemplified by Julie ultimately choosing to go with Randy despite her friends' misgivings, remains as resonant in our polarized world as it did back in the Cold War 1980s. Just like Modern English says—the future's open wide.

Valley Girl plays tonight, Thursday night and Friday night at the New Beverly Cinema. Cameron Dye, Elizabeth Daily and Heidi Holicker will be in person on Friday night. Advance tickets are sold out, but will be available at the door.

Carman Tse is a diehard Giants fan living in Los Angeles as well as a freelance arts and culture writer and former editor-in-chief at LAist. Follow him on Twitter at @CarmanTse.