A Visual History Of The Immigrants Who Built Los Angeles 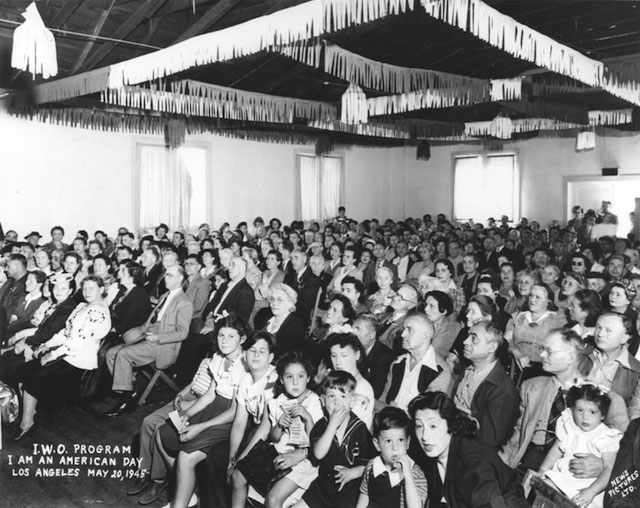 Immigrant participants at "I Am An American Day" program sponsored by the International Workers Order, 1945. (Photo courtesy of the Los Angeles Public Library Photo Collection)

In a guest piece for LAist, Glen Creason, author of "Los Angeles in Maps," explores the vibrant history of immigrants in early Los Angeles, and their seminal role in building the city. He has also shared a number of maps from the Los Angeles Public Library's archive.

In reflecting on the current abomination of officially sanctioned national xenophobia and bigotry, we should remember that Los Angeles—despite today’s widespread protests—is a city where such base behavior is both familiar and deeply rooted in our history.

One does not have to dig too deep to find incidents like the Chinese Massacre of 1871, which featured gleeful public lynching in the Pueblo, the shunting of non-whites into the early barrio of Sonoratown and the concerted effort of carpet-bagging Americans to erase the Spanish-Mexican roots of the Ciudad de La Reina de Los Angeles.

This map showing the L.A. of 1871 has a panel on the left side depicting lynchings in the Plaza 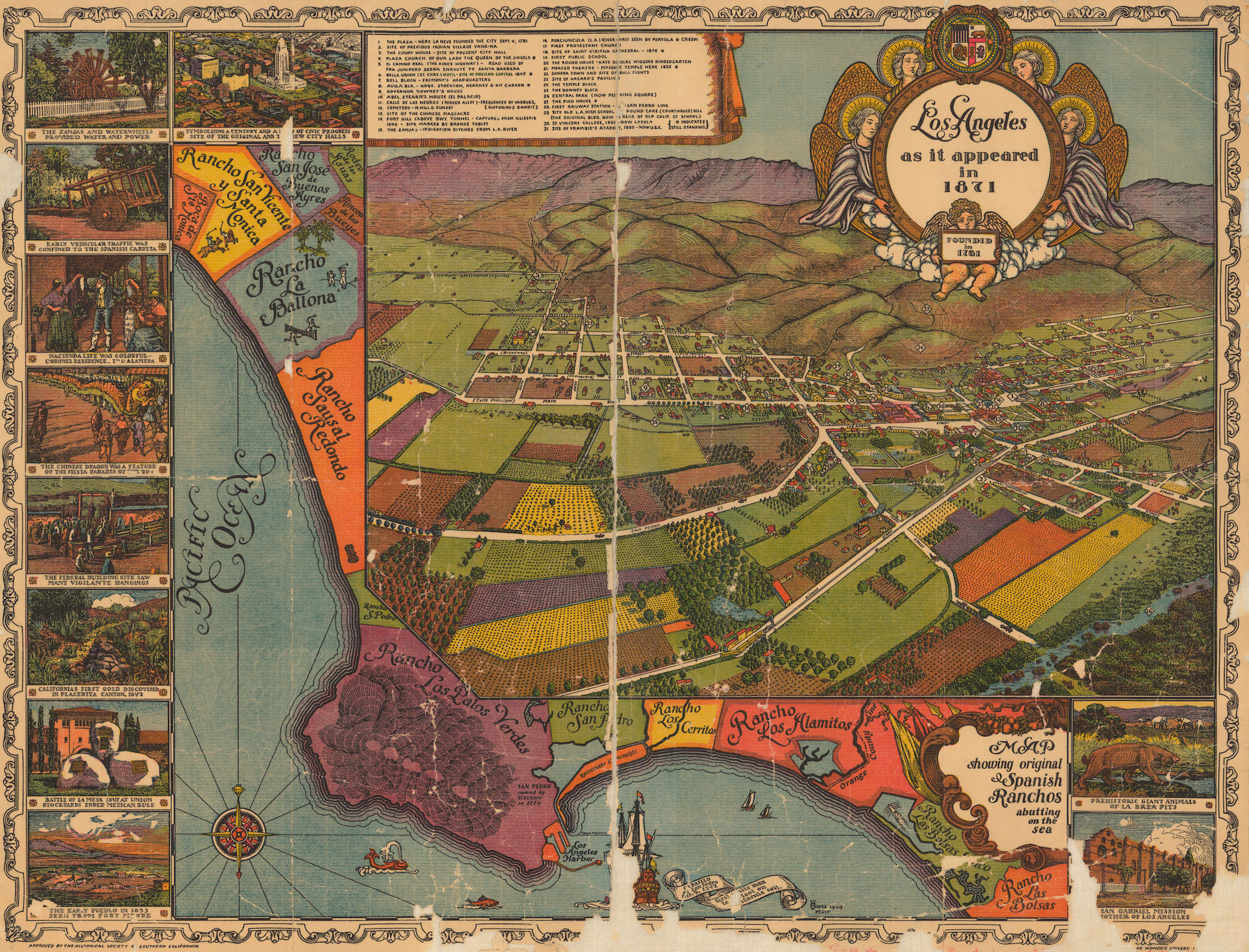 Early local papers contained anti-Irish and anti-Italian sentiments along with jokes and cartoons about Mexicans, Indians and blacks who were portrayed as shiftless and lazy, despite the fact they practically stuck together the infrastructure of the growing city with their sweat.

This "humorous" map from 1948 displays those racist Anglo attitudes toward Mexicans, as evidenced by the caricature of a Mexican "sleeping" in the lower right corner of the map.

The great majority of the impressive structures that gave shape to the modern big city were created brick-by-brick by pathetically low-paid Mexican immigrants who ended up in poverty while being treated as second-class citizens. This racial hatred reached a sick pinnacle with the 1943 Zoot Suit riots and the beating of young people of color on the streets of L.A. for days with very little interference from the police or establishment politicians. As recently as the 1920s, popular demagogue preacher Robert P. Shuler lauded the KKK and excoriated innocent minorities while the troglodytes drooled in front of their radios.

The foundations of the roads and rails in the big city were created by hard-shelled Chinese and Irishmen who were thanked by being tossed aside as soon as the streetcars and railroads made L.A. a place of opportunity for more rubes from the East and Midwest. All of this happened with astounding rapidity, especially for the original Angelenos—the Tongva Indians who once hunted the hills of the Southland and fished along the coast while coexisting peacefully with other tribes in Southern California.

Even when a trickle of settlers came up from what would become Mexico and put down roots near the Porciuncula River there was harmony enough for an ethnically diverse pueblo. Yet, with the Missions' quest to “civilize” the Indians, Christianity came with oppression including paying the Gabrielenos (Anglo for Tongva) and Fernandinos in liquor then having them arrested for drunkenness and fined for public intoxication which they could work off with what amounted to slave labor. When the Missions were secularized by Mexico and the lands absorbed by ranchos, the promises made to the Mission Indians who had worked for generations were ignored and years of loyalty was repaid with repression and rejection. The short Mexican rule (1831-1850) that ended with the big, bad United States taking a huge chunk of land in the Treaty of Guadalupe Hidalgo was the last gasp of a Hispanic settlement that was soon swamped with Yankees who quickly sought to Americanize their adopted land.

The odd Angelenos out were the Mexican-Californios, the Chinese, the indigenous people and those laborers who built the railroads, dug the irrigation ditches, created the harbor and cleared land for agriculture and settlement that would benefit the same newcomers who would exclude them, keep them from owning property and erase all evidence of their place in Los Angeles history. 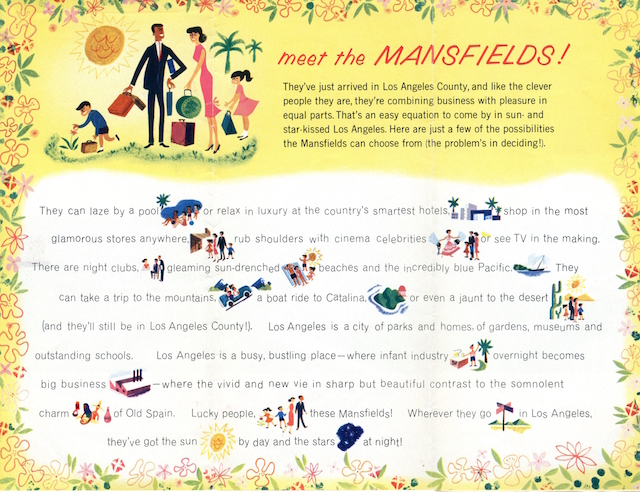 The question is where our dear dirty Los Angeles would be without immigrants, brought in generation by generation, only changing ethnicities for the capitalists who needed cheap labor to realize their schemes in the City of the Angels and to buy the land they had gathered with the promise of California as an Eden. By the turn of the 19th century, the newcomers had managed to blur the Spanish city into another American big city with an awful lot of Spanish place names. When the old Sonoratown was rescued and turned into Olvera Street in the 1930s, and the wild and worldly Chinatown was covered over by Union Station, sanitized ethnic cities rose in their place.

Still, history records that Los Angeles was founded by people of mixed blood and allowed to grow by immigrants from all over the globe. Even at the time of statehood Spanish, French, Italian, Russian, Chinese and German were heard on the dusty streets of the old Pueblo. Many of the early colonial Los Angeles pioneers learned Spanish to communicate with the natives but came from other countries or ventured across the globe. Actually, the first American did not come ashore here until 1805, and maps continued to use Spanish and English place names for decades after Uncle Sam made his claims in Los Angeles.

Here are some of those immigrants who laid the foundation of our city's history. The lack of women pictured is not because they weren't integral to the city's founding, but simply because of the unfortunate fact that most remained invisible when the stories were told.