The Hollywood Bowl Released Its Summer Schedule And It Delivers Big 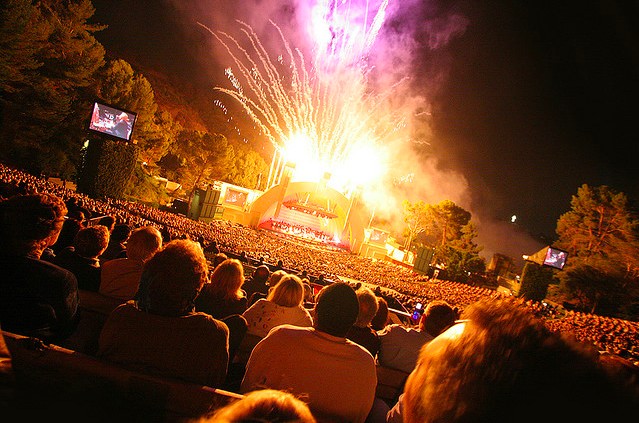 The Hollywood Bowl announced its upcoming summer season schedule Tuesday and, as expected, it's stacked with impressive programming aimed to please every faction of Angeleno. Continuing the tradition of soothing frayed nerves from the historically brutal summer sun with the arts, the Hollywood Bowl will play host to screenings, musicals, concerts, and more from June 15 to September 24.

KCRW plays a big role in the venue's curation with their bi-monthly World Festival, which boasts an impressive roster of R&B, punk, jazz, and pop musicians. Brazilian singer Seu Jorge will pay tribute to the late David Bowie by reprising his character from Wes Anderson's The Life Aquatic in which he sang Portuguese covers of classic Bowie songs. Jorge briefly toured the show back in November 2016 and will bring it back to L.A. on June 25. Other highlights include Blondie, Garbage, and Sky Ferreira on July 9 as a gentle reminder of the excellence of women in rock music throughout the decades, and soulful and political R&B acts like Blood Orange, Solange, and Kelela, who will close out the season on September 24.

Additionally on the music front, the Hollywood Bowl will celebrate 100 years of jazz with Jazz at the Bowl, honoring legends like Dizzy Gillespie and Ella Fitzgerald, including evenings with artists continuing the traditions like Kamasi Washington, Jill Scott, Quincy Jones, and more.

The Harry Potter franchise returns to the Hollywood Bowl for its sophomore year, once again linking up with Los Angeles Philharmonic for a live orchestra to soundtrack the mayhem that unfolds at Hogwarts. If children fighting an unknowable evil in Chamber of Secrets and Prisoner of Azkaban isn't your thing, live orchestras will also accompany Raiders of the Lost Ark and Singin’ in the Rain. Broadway is also set to hit the Hollywood Bowl stage with Mamma Mia!, the longtime fan-favorite musical based off the songs of ABBA. The new production will be directed and choreographed by Kathleen Marshall, while the all-star cast and creative team will be announced at a later date.

The Hollywood Bowl is located at 2301 Highland Ave. in Hollywood. Tickets will be available as the events approach.