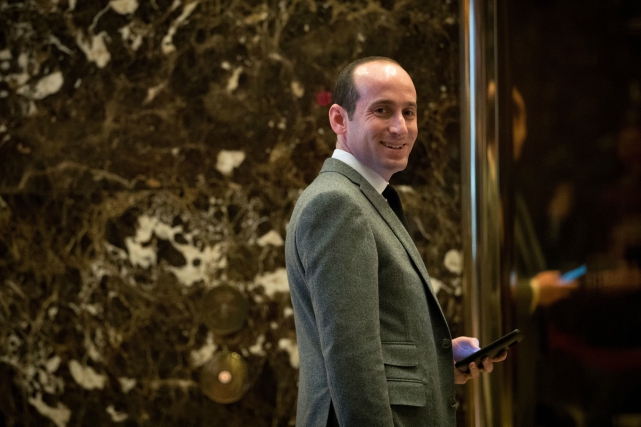 Residents of Santa Monica are scratching their heads - how did their seaside bastion of liberal politics produce Stephen Miller?

Following a series of dead-eyed appearances on the Sunday morning talk shows, Santa Monica residents buzzed with a fresh round of WTF tweets.

My extracurriculars at Santa Monica High School were abundant, but I could've applied myself more in bullying underclassman Stephen Miller.

Miller, 31, was a former Senate staff member to Jeff Session (who, you'll recall, was deemed too racist to be confirmed as a federal judge in the 1980s, and is now the U.S. Attorney General). Today, Miller is a senior policy advisor to President Donald Trump.

But Miller showed signs of his political leanings even back in high school.

This op-ed for the Santa Monica Lookout was penned by a 16-year-old Miller, and decries "out of control" political correctness at Santa Monica High School (which Miller attended) and beyond.

“Early on in life, he was on a crusade against liberalism and liberals,” Oscar De La Torre, a former counselor who interacted with Miller, told the Los Angeles Times. “He just didn’t buy it. He didn’t believe the oppression existed.… This guy is 17 years old, and it’s like listening to someone who’s 70 years old — in the 1930s.”

“He would take the opposing position and almost shock people. It would send reverberations through the room,” an acquaintance of Miller's, speaking anonymously, added. “He would sort of chuckle and enjoy that.”

And Miller, is not the only young, Jewish, alt-right advisor to the Trump administration the L.A. area has produced.

Hahn grew up in Beverly Hills, and attended prestigious Harvard-Westlake. Today, she is a special assistant to President Trump.

Unlike Miller's political ideologies, Hahn's did not materialize until more recently.

After college, Hahn sought a media job in Washington D.C. She landed a producing gig with conservative talk-radio host Laura Ingraham. “I asked [Hahn], ‘Oh, is that what your politics are?’ ” a former classmate of Julia's asked her at a party. “She went, ‘Nah, I’m apolitical.’ I thought, O.K., there are two possibilities. Either she’s dissembling because she doesn’t feel comfortable being outed as a hyperconservative or she actually is just a pure social climber.”

So, there you have it kids: even liberal, coastal elitist L.A. can produce alt-right political operatives.

Here is Stephen Miller's 2002 op-ed in the Santa Monica high newspaper, "A Time to Kill." pic.twitter.com/Eu7ZaaSxJD