Black Rabbit Rose plunges its guests into a captivating milieu of magic and illusion where nothing is as it seems. Cocktails smoke and smolder, while a clandestine stage show features a rotating cast of sideshow acts. It's the latest bar from the Houston Brothers, who have immersed their clientele in the '70s with Hollywood's Davey Wayne's, in the '80s with Koreatown's Breakroom 86, and a Prohibition-era speakeasy at No Vacancy.

Drinks are clever, and many are inclined to spectacle. The mezcal and honeydew Honey Bunny seethes a delicate mist. The Smoke 'n Mirrors is a gin-based drink with sweet vermouth and campari that is prepared piece by piece at one's table, then finished with fire. The Bullet Catch is a rum and coffee concoction that also receives a touch of flame. It is so named for the dangerous trick in which a magician catches a bullet, often with their teeth. The bullet catch is what killed magician Chung Ling Soo in 1918. Chung Ling Soo, whose visage is painted on one of the bar's brick walls, was actually an American magician named William Robinson who took his stage name after Chinese magician Ching Ling Foo challenged any other magician to replicate his tricks for $1,000. Soo continued to dress like and perform as though he were the real deal, but died after his gun malfunctioned and actually fired a bullet right into his lung. 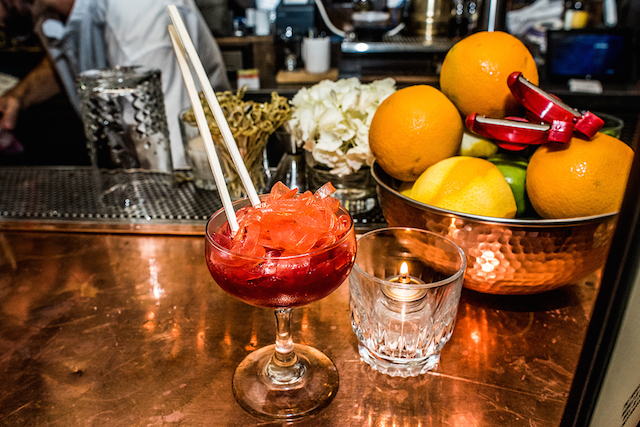 The Drunken Noodle is a tequila and blood orange elixir that literally comes with a pile of noodles in the glass. Perhaps the favorite drink, however, was one presented without much flourish: The Siamese Twin is a spiked Thai iced tea made with turmeric-infused rum and condensed almond milk. The milk comes in small pearls, which you break to produce the cream.

Food is available via Crying Tiger, a Chinese-Thai restaurant that comes in the form of a takeout window outside. Items include crispy chicken skin, pad thai, lettuce cups, popcorn shrimp, egg rolls (made from the Houston Brothers' mother's recipe), and tamarind orange chicken. It's the perfect mix of sweet and spicy to soak up the colorful cocktails, and most items are quite affordable for Hollywood, ranging between $5 to $12. While you can order Crying Tiger dishes inside Black Rabbit Rose when it's open, food items are available via the window when it's not.

Magic shows run Thursday through Saturday, and you must purchase a ticket for $25 to $40. The theater, draped in red velvet, is intimate at 40 seats, so there isn't a bad one in the house. The shows are curated by actor and magician Rob Zabrecky, who enchanted us with a darkly comedic performance on Thursday night, complete with piano accompaniment and volunteers plucked from the crowd. Zabrecky shared the evening with performers including magician Liberty Larsen (of Magic Castle lineage) and sword swallower Brett Loudermilk.

Black Rabbit Rose will officially open to the public on February 11.