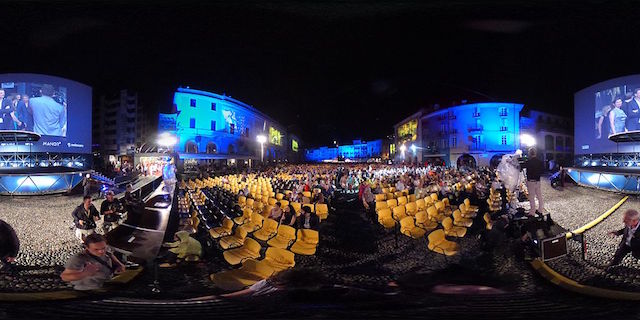 For a city whose legacy is largely shaped by the movies, Los Angeles has been lacking in an internationally-renowned film festival. Yes, there's the yearly AFI FEST—but the meat of their slate is largely Cannes retreads. This spring, however, one of the world's oldest and most respected festivals makes its way to L.A.

In April, the roving Acropolis Cinema will collaborate with Switzerland's Locarno Festival for a weekend of screenings in downtown. Ten films, which first premiered at Locarno's Pizza Grande in August and will make their Los Angeles debuts, will screen at the Downtown Independent Cinema as part of Locarno in Los Angeles.

"For me Locarno is unmatched in terms of its unmatched scope of cinema, its youthful energy, and discovering filmmakers that really matter," Robert Koehler, co-artistic director of Locarno in Los Angeles, said at a press conference announcing the event.

And while Locarno isn't as prestigious as fellow festivals at Cannes, Venice or Berlin, it has made a name for itself by breaking from the pack and serving as the gatekeeper for the future of cinema.

The first iteration of the Locarno Film Festival took place in 1946, making it the first international film festival to take place after the Second World War. "Locarno, a Swiss resort, asserted its neutral position when postwar costs constrained Cannes and Venice," writes Cindy H. Wong in Film Festivals: Culture, People, and Power on the Global Screen. Among the notable films in the Locarno's debut lineup include the Billy Wilder classic Double Indemnity, Sergei Eisenstein's Ivan the Terrible, and Roberto Rossellini's Rome, Open City, the first major Italian film made after the war and the breakthrough of the Italian neorealism.

In the decades to follow, Locarno would break from its fellow festivals and become a showcase of not just the state of cinema in the present, but also in the future and of its past. It became one of the first European festivals to host retrospective series on cinematic icons, and it has honed its general focus to be a harbinger of emerging voices and national cinemas. The festival paved the way for rise of Chinese-language cinema in 1985 by showing Chen Kaige's Yellow Earth (the first Mainland Chinese film to screen at a European festival) as well as Hou Hsiao-hsien's A Summer at Grandpa's (marking the arrival of the Taiwanese New Wave). Other filmmakers whose careers are indebted to debuting and even winning a prize at Locarno include the recently-departed Iranian legend Abbas Kiarostami, Jim Jarmusch, Spike Lee, Béla Tarr and Gus Van Sant.

Each of the ten films at Locarno in Los Angeles will make their Southern California debut in April and will also likely not screen here beyond the event. Acropolis Cinema founder and Locarno in Los Angeles programmer Jordan Cronk told LAist that the goal was to screen films that would be unlikely receive distribution in Los Angeles—a particular challenge for high-minded arthouse titles in this city. Highlights include the Serbian film All Cities of the North, which Koehler called a "revolutionary film without precedent" and proclaimed his favorite film of 2016, Hermia & Helena by Argentinian enfant terrible Matías Piñerio, and Scarred Hearts by Romanian New Wave mainstay Radu Jude. The centerpiece event of the program is a screening of the American documentary Rat Film, which uses the titular pests to explore the history of race and class divisions in the city of Baltimore. Rat Film director Theo Anthony will be in attendance for the screening, and Cronk and Koehler say more filmmakers are scheduled to be in attendance. 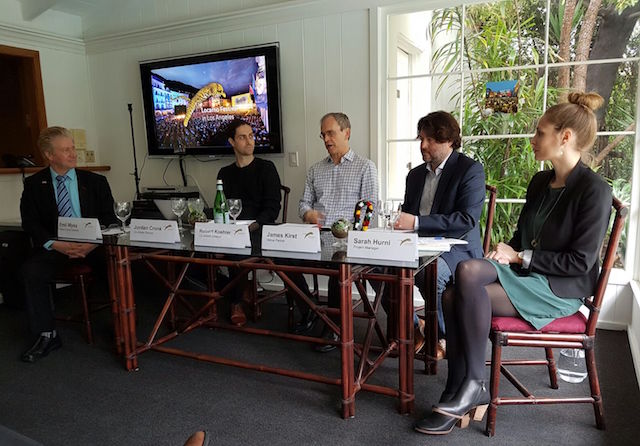 The festival team at a press conference Monday. (Photo via Acropolis Cinema)

At a time when it feels like larger forces are trying to close off society to the rest of the world, events like Locarno in Los Angeles remain vital to ensure the exchange of art and ideas between international cultures. "When you consider that the festival is covering in just three days no less than four major young Latin American filmmakers, experimental non-fiction about everything from American urban development to Arab culture in the high-tech age, important and yet under-seen European filmmakers like Angela Schanelec and Radu Jude, and incredible breakthrough works from such disparate nations as Bosnia and Japan," says Koehler, "audiences are in for quite an experience this April."

Carman Tse is a diehard Giants fan living in Los Angeles as well as a freelance arts and culture writer and former editor-in-chief at LAist. Follow him on Twitter at @CarmanTse.