Here Are The Big Marches And Rallies Happening This February In L.A. 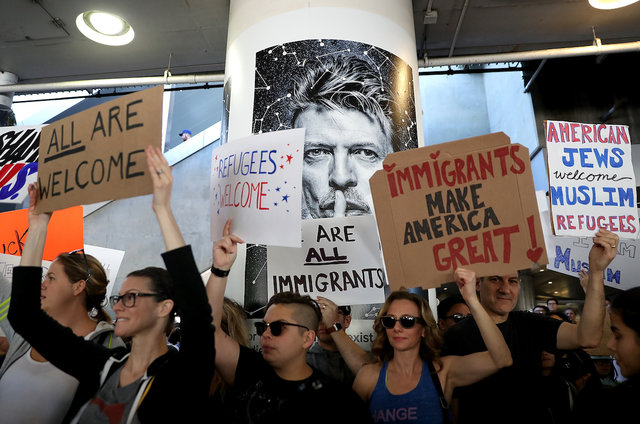 Donald Trump has only been in office for 13 days, and his presidency has already sparked what is shaping out to be one of the most politically active periods in U.S. history. Los Angeles has been one of the cities at the forefront of organizing and mobilizing efforts: over 350,000 people protested at the Women’s March on January 21 following the inauguration, and thousands descended upon LAX after President Trump signed an executive order temporarily barring entry to refugees and citizens of seven predominantly Muslim countries.

Certainly, the resistance isn't showing signs of slowing down, and for those who are interested exercising their First Amendment rights even more (before they get taken away), here are some major ways to get involved this month.

Medicare For ALL March and Rally

President Trump is making good on his promise to repeal the Affordable Care Act, which will leave over 20 million Americans uninsured, and show his allegiance to profiteering insurance companies over the people he's sworn to protect. Those against the order will gather to rally for a single payer system that would guarantee universal healthcare for all, the same way that Medicare currently does for senior citizens. Speakers for the event are yet to be announced, but expect it to be an informative event.

The immigration ban has created chaos across the country as detainments continue. In response, there’s a new push to tackle the problem by taking a page from the Occupy Movement of 2011. Protesters are staying overnight at LAX with hopes of speeding up the release of each new detainee (the number of which have been hard to determine). Bring food, water, phone chargers, and if you’re a Arabic or Farsi speaker, your translation services could be extremely helpful.

The Dakota Access and Keystone XL Pipelines are back on track thanks to President Trump’s disregard for tribal treaties, as well as his staunch denial of climate change. If you’re in protest of the executive order and can’t make it to North Dakota to join the Water Protecters in person, a rally will be held at Pershing Square for those hoping to stand in solidarity.

If you feel inclined to celebrate the corporate scheme that's colloquially referred to as Valentine’s Day (while still being a part of the resistance), we suggest Panache’s Valentine’s Day Village of Love. The show will benefit Planned Parenthood of Los Angeles, and will offer you a night of some of the city’s best punk and garage rock, featuring artists like Ty Segall, King Tuff, Bleached and more. What’s not to love?

Tuesday, February 14 at Teragram Ballroom. Doors open at 6 p.m. with the show beginning at 7 p.m.

President Trump and his administration have made their Islamophobia crystal clear; the temporary ban on immigrant travel focused on the majority-Muslim populations of Iran, Iraq, Syria Sudan, Libya, Yemen and Somalia. The executive order has sparked outrage nationwide as the country’s international airports have transformed into stomping grounds for protesters who believe in the wild notion that immigrants aren’t a threat to democracy. The fight for immigrant rights continues on February 18 at Pershing Square, with more details available as the march approaches.

Not My President Day Rally

Sure, Donald Trump is technically the president, but that doesn’t mean we have to spend a single second pretending the state of affairs are not profoundly horrible. Spend this President’s Day opposing the commander-in-chief and all of his xenophobic, environmentally destructive, and sexist policies in one fell swoop. There’s also a congressional recess on the day of the protest, which means that federal representatives will be back in California to bear witness.

Know of more events to include? Email them to tips@laist.com with "March" in the subject line.