You Can Now Get A Croissant Stuffed With Sushi 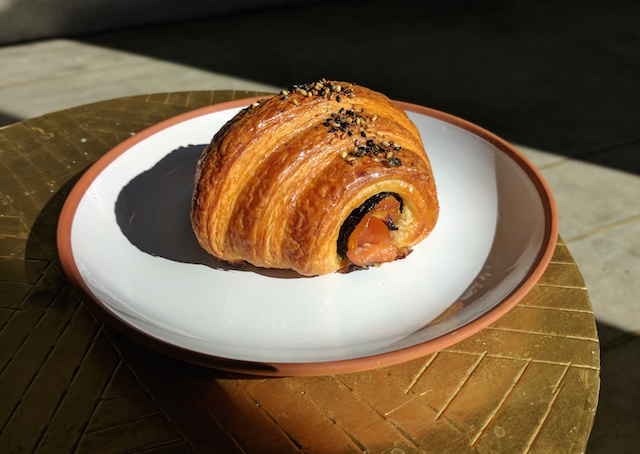 Mr. Holmes Bakehouse, the San Francisco-based bakery that opened its first L.A.-area outpost in Highland Park late last year, gained notoriety for the cruffin. They've now brought another one of their Frankenstein pastries to Los Angeles: the salmon-stuffed croissant known as the California Croissant.

How much heavy lifting must the croissant do? It is constantly being paired with random things, when it is perfectly sufficient as a flakey, buttery solo act! Yet, here we are again. Though advertised as a sushi-stuffed croissant, the California doesn't contain raw fish. Instead, it bakes smoked salmon and nori (seaweed) into the center of the pastry with wasabi and ginger. The top of the pastry is sprinkled with furikake. The outside is slightly sweet, which one might expect a pastry to be, and a little salty, but the inside is definitely fishy. The wasabi and ginger flavors do not come through too aggressively. And because the salmon is smoked, not raw, it's not that far off from the idea of a bagel and lox. The California comes served with a side of soy sauce, if you prefer. 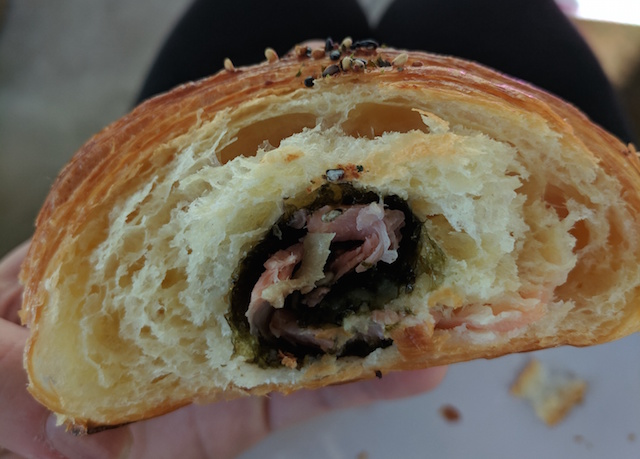 Inside the croissant. (Photo by Juliet Bennett Rylah/LAist)

People have been putting ham and cheese in croissants for as long as we can remember, and no Midwestern family gathering is complete without someone bringing mini-weenies wrapped in Crescent rolls (the "pig in a blanket," if you will). Over at SumoDog, which just opened in Koreatown earlier this January, they're sprinkling furikake on hot dogs. So, really, we feel like this isn't that odd a combo. But is it good?

Sure! It's still a bit heavy, being a croissant, but lighter than one filled with bacon or ham. It's savory and reasonably filling for a breakfast or snack item. It's not as good as Mr. Holmes' strawberry jalapeño bear claw, but if you're in the mood to try something new with a bit of protein, go for it.