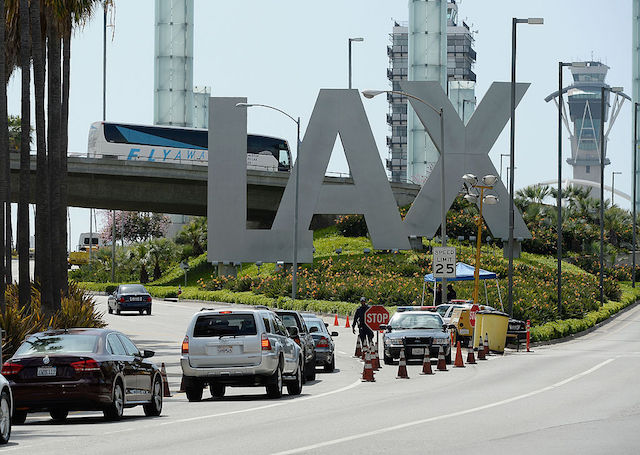 When Martin de la Cruz and Brian Dix arrived at Los Angeles International Airport from a weeklong vacation in Belize on Saturday, they expected to head home to Mid Wilshire almost immediately. Instead, they found themselves caught in the midst of chaos created by President Trump’s executive order on immigration.

After disembarking from his flight, de la Cruz, a legal permanent resident who was born in Mexico, was subjected to a secondary inspection. He was detained for five-and-a-half hours in what he described as horrific conditions. During this time, Dix, his fiancé, had no idea what was happening.

De la Cruz had first arrived in the United States from Mexico on a work visa in 2012, picking tomatoes in Tennessee. The following year, he applied for political asylum based on his sexual orientation. He was granted asylum in 2014. In 2015, he applied for and was granted legal permanent residency—a green card. He’s authorized to work, go to school, and travel abroad. He’ll be eligible to apply for citizenship in 2020. The vacation to Belize was the first time de la Cruz and Dix had traveled abroad together.

“I went through a line that took just a few minutes,” says Dix, a 34-year-old American citizen who works as an operational supervisor for Amtrak. After he was waved through, Dix headed outside to wait for de la Cruz. He waited a while, but didn’t think much of it for the first few minutes. “I got a text from Martin about an half-an-hour later,” explains Dix. His fiancé had been flagged for secondary inspection. Desperate to figure out what was happening, Dix called a friend who explained that the procedure might take an hour or two and said he shouldn’t worry.

De la Cruz, meanwhile, says he was escorted to a room with approximately fifty chairs, which were all taken. “Everyone else,” says de la Cruz, “was left standing.” The 27-year-old Los Angeles Community College student was told to turn off his phone, computer, and any electronic device—and warned that no one was allowed to talk to one another.

Not that they could necessarily communicate very well: the room was filled with people from all over the world—including some from the seven countries on Trump’s designated list. De la Cruz knows this because the room he was detained in contained seven booths, and three agents in the booths asked questions of those called up one-by-one, in earshot of everyone else there. At least some of the others were from Iran, says de la Cruz. And some of them were children, as young as what de la Cruz estimates to be two years of age.

De la Cruz says that every single minute inside the detention room was filled with suspense, fear, and confusion. “When I first got there, I had no idea what was going on,” he says.

There was no water available. And the only food available was in a vending machine—which few could use, since they’d just landed back home from a trip abroad and didn’t have U.S. dollars. Aside from the toddlers, there were also elderly people there, as well as people who needed wheelchairs but weren’t afforded them.

When one person in the room began to complain, de la Cruz says, a Customs and Border Protection officer came out and yelled at the top of his lungs, “Shut up and sit down!” When another individual who was visibly sick and had been vomiting asked for an ambulance, the man was told that he could ask again only after he was released.

Meanwhile, Dix waited for his fiancé outside. Learning more and more about Trump’s executive order yielded no answers about why de la Cruz was being detained.

It’s difficult to determine which exact room de la Cruz was held in at LAX’s Tom Bradley International Terminal. Meeth Soni, directing attorney at the Immigrant Defenders Law Center, says that every airport and every terminal is different—but that’s it’s safe to assume that the space where de la Cruz and the sixty or so other people he was held with was likely one of several such rooms at the terminal. Each room might be different: some be may small private rooms with one desk. Others are much bigger with booths, and waiting areas, where everyone can hear one another being interrogated by agents.

De la Cruz says he never expected to be detained and question after a quick vacation to Belize. Sure, he’d heard something about an executive order on the television screen at the airport, but he says that as a Mexican national, it didn’t cross his mind that, as he described, he’d be feel humiliated at the hands of Customs and Border Patrol agents. “People think it’s only Muslims that are being detained,” says de la Cruz. “But it’s many more.”

It’s unclear why de la Cruz and so many other people who were not born in countries on Trump’s designated list were flagged for secondary inspection. A phone call to LAX’s public relations team ended after the officer on the line answered that they had been instructed by CBP not to comment and instead refer all calls to a phone number connected to Jaime Ruiz, the CBP’s Northern/Coastal Branch Chief. Several messages and emails to Ruiz were not returned.

After several hours, de la Cruz was finally called up to one of the booths and repeatedly asked if he’d ever worked off the books. “‘No,’ I kept telling them,” he recalls. He was asked over and over again—in a room full of strangers. He was then told to take a seat once again. Some time later, his name was called again and he was told to grab his things. He was free to go.

With as much confusion as he’d first entered a few hours before, he walked out the door. Dix found him right away and the two began talking to one of the many attorneys camped out at the international terminal on Saturday night. Minutes later, the couple decided to join the protest. “Of course I joined,” says de la Cruz. “I can’t be silent about what happened now.” On Sunday, de la Cruz and Dix returned to LAX to join in protest again.

Aura Bogado is a writer based in Los Angeles. Her work has appeared in various publications including The Guardian, The Nation, Mother Jones, Salon, and Colorlines. She tweets at @aurabogado.