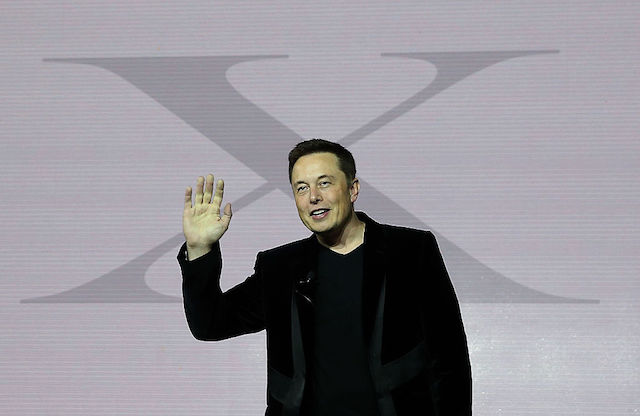 Raise your hand if you're building a tunnel. (Photo by Justin Sullivan/Getty Images)

Last week we mentioned that Elon Musk was doubling down on claims that he would dig a tunnel under Los Angeles. He said that he wasn't a fan of L.A. traffic, and that tunnels could be a solution to all our commuter woes. Many were incredulous. Like, really?

As reported by the Daily Breeze, it is indeed happening, as Musk started digging a tunnel this Friday at SpaceX headquarters in Hawthorne. The excitement is tempered by the actual details, however. Right now, the hole is actually a 30-foot wide, 50-foot long, and 15-foot deep "test trench," reports Wired. And the current goal is to build a tunnel that stretches from the SpaceX parking lot to company facilities. So no, this isn't the beginning of some vast, underground utopia...not yet, at least.

At @SpaceX headquarters in Hawthorne, CA, they've started digging a tunnel. Could this be the answer to traffic gridlock? On @TODAYshow. pic.twitter.com/aeVYLY4fVS

Musk said at a Sunday event at SpaceX that the project is part of an experiment for the company to "figure out what it takes to improve tunneling speed by, I think, somewhere between 500 and 1,000 percent," according to Wired. Specifically, Musk is hoping to build a bigger and more efficient tunnel boring machine. "We’re going to get this machine, take it apart, figure out how to make it go much faster while still being safe and not affecting people on the surface," said Musk.

He added, “We have no idea what we’re doing," which is very reassuring.

To explain why he's so bent on tunnels, and why he thinks they make sense in alleviating traffic, Musk points to buildings as being 3D (meaning you can move up and down in it, and horizontally) and city roads as being 2D. "[Everyone] wants to go into the building and leave the building at a same time,” he said. “On a 2D road network, that obviously doesn’t work, so you have to go 3D either up or down. And I think probably down."

In direct messages sent to The Verge via Twitter last week, Musk said that, "we will all be in traffic hell forever" without tunnels, adding “I really do think tunnels are the key to solving urban gridlock. Being stuck in traffic is soul-destroying. Self-driving cars will actually make it worse by making vehicle travel more affordable." Which is also to say that tunnels wouldn't just save us time; they could possibly cure us of our existential crises as well.

Some people are skeptical, to say the least. Speaking on Musk's plans to build a better tunnel boring machine, one anonymous (smart move) "tunneling consultant" told the Daily Breeze that the idea was ridiculous. "Give me a break. You think someone can take apart a Boeing plane and put it back together, improving it by 500 percent? Elon’s got a very steep learning curve,” said this mysterious person.

According to Wired, Musk has voiced the possibility of extending his tunnel to LAX. This gambit, however, would likely face a complex and protracted path in which he'd run up against local opposition, among many other things. Plans to extend the Purple Line, for instance, have been staunchly opposed by some Beverly Hills residents, as the tunnel would run beneath their city. The mandatory environment review for the project (another thing Musk would likely have to deal with) was contested as being incomplete, and the case was put before a U.S. District judge (who agreed that the review was lacking, but also allowed the project to move on).

Musk also reminded us at Sunday's event how big of a nerd he is. "I find holes very exciting. I was discussing it with my girlfriend and she didn’t find it that exciting, but I thought it was really great," said Musk, according to the Daily Breeze.