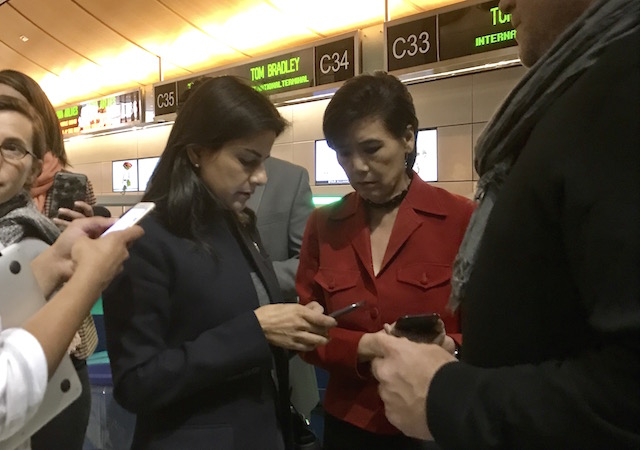 The scene at Los Angeles International Airport on Saturday night—one day after President Trump had issued an executive order indefinitely blocking Syrian refugees and temporarily barring entry for individuals from seven Muslim-majority countries—was utter chaos. Standing in solidarity with their counterparts at airports across the nation, hundreds of protesters chanted and sang outside the entrance to Tom Bradley International Terminal. Inside the terminal, a group of volunteer lawyers and translators had set up shop outside the U.S. Customs and Border Protection booth, turning it into an impromptu office with a rotating group of tens of individuals clustered on the floor, doing whatever they could to assist the legal efforts.

There was almost no concrete information about the number of individuals detained. "The only way we've figured out who's being detained is if we're walking around with our name tags that say 'lawyer' and people come up to us to ask for help," one lawyer who was volunteering on Saturday night at LAX told LAist. According to the lawyer, who asked not to be named because of professional concerns, the volunteers were working with the families of about 15 detainees.

"They haven't told me anything," Los Angeles Airport Police Chief Patrick Gannon told LAist on Saturday night, saying that customs officials hadn't given him any information. "It's a crazy day," Gannon said.

Two U.S. congresswomen were among the slew of local politicians who had arrived at the airport to show their support. Despite the fact that a federal judge had issued an emergency stay against the implementation of Donald Trump's executive order on Saturday night, Rep. Judy Chu and Rep. Nanette Barragán were still stonewalled by customs officials when they tried to get information about detainees. Here's a video of the two congresswomen on the phone with customs officials just after 8 p.m. on Saturday night:

A few minutes later, Chu and Barragán tried to reach a different customs official and were sent to voicemail:

A group of three men who work at an agriculture company in Saudi Arabia and had traveled to Los Angeles on a business trip told LAist around 8:30 p.m. that they had been waiting all day for a colleague who had been detained after their flight from Jeddah landed at 11:20 a.m. The three men, who asked not to be named, said their colleague was a Syrian national who also lived in Saudi Arabia. They showed LAist copies of letters from the University of Arizona detailing their 10-day tour visiting a number of agricultural sites in California and Arizona, and said they had all been granted visas for the business trip. "We don't know what happened to him," one of the men said of their Syrian colleague. "They just gave us one email."

The L.A. Times reports that 28-year-old Neda Daemi, a green card-holding student who was detained for about 10 hours was released at about 10 p.m. Saturday. Daemi told the Times that she had been held with approximately 40 other people. The Times reports that by Sunday morning a number of other detainees had also been released.

Neda Daemi was detained for ~10 hours. Said she was treated nicely. Her msg to Trump: "Muslims are good people" pic.twitter.com/RlMZ53rZWd

Meeth Soni, directing attorney at Immigrant Defenders Law Center told LAist on Sunday morning that people were still detained at LAX, but they didn't know how many.

Protests at LAX continued on Sunday.

More information about a larger official protest slated to begin at 1 p.m. on Sunday can be found here.