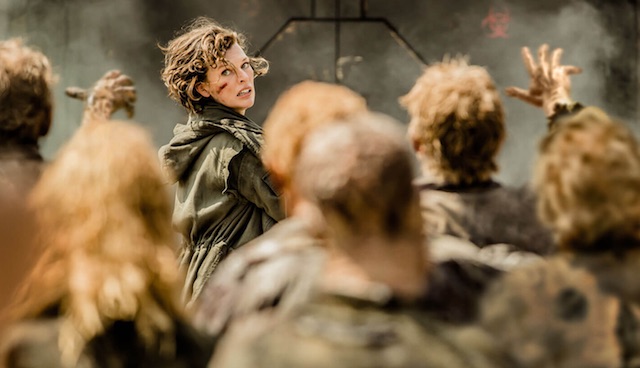 Milla Jovovich on the run. (Photo courtesy of Sony Pictures)

Has any other movie franchise existed entirely on its own wavelength the way Resident Evil has? Director Paul W.S. Anderson's adaptations of the survival horror video game have produced a strange apocalyptic vision of techno-capitalism gone amuck, all of which is relayed through increasingly bizarre (yet beautifully staged) action set pieces. Alongside his muse Milla Jovovich —a Marlene Dietrich to his Josef Von Sternberg—the director has peppered in bro-level philosophical questions that touch on the self and the digital age, all while providing plentiful ass-kicking of zombie hordes. While densely plotted, overloaded with silly CGI effects, and containing some of the most moronic B-characters who exist for the sole purpose of being slaughtered, the franchise has built a cult of surprisingly highbrow followers.

As the title suggests, The Final Chapter provides a capstone to the six-entry series, speeding along at breakneck pace as Jovovich's superhuman Alice must return to the devastated Raccoon City and release an antidote to stop the zombie apocalypse. After a flashback prelude sets the stage for some big reveals (none of which are particularly interesting), the film launches into a number of wordless battles, with Alice waking up in a devastated Washington D.C. to be greeted by a welcome party of zombies, dragons, and military men. Zipping from one kinetically staged battle to another, the long open feels like Anderson's version of Buster Keaton's The General. Jovovich flies through the air in every direction like a plastic mannequin as she maintains her stone-faced intensity (with a few choice one-liners). 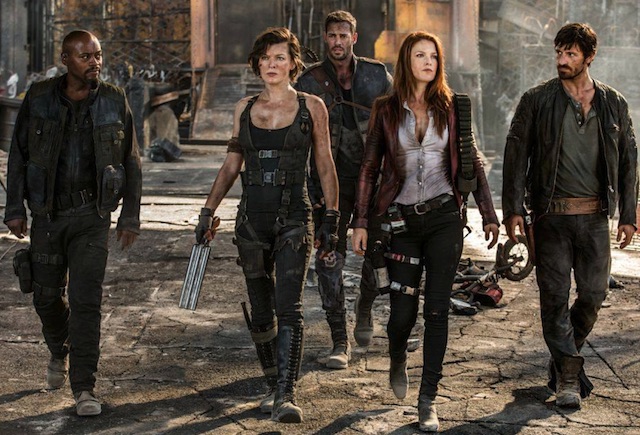 While their last entry, 2012's Retribution, went into video game mode by introducing levels and respawned characters, The Final Chapter aims for a visceral intensity not felt since the Vegas-set Extinction. Under the 3D lens of Glen McPherson's earth-tone palette, the film emphasizes its post-apocalyptic amid the sounds of screams, shattering bones, and crumbling concrete. And with Gamer's Doobie White as editor, the action moves with a velocity not seen before in Anderson’s filmmaking. This can be a bit challenging to follow. But unlike the shaky-camera use in Jason Bourne or most Marvel films, Anderson frames everything in a way that makes things coherent. Even as the kicks and punches flash across the screen for a hot second, the action pieces build to a beautifully choreographed routine, one that may climax with Alice dangling from a rope and striking a dramatic pose that's reminiscent of a Bernini sculpture. And while the adrenaline fueled set pieces aren't new to Anderson, who's known for bonked-out scenarios, he still finds new methods of keeping his work fresh.

What remains a staple for the Resident Evil series has been the neatly symmetrical (and sometimes jagged) sets that create a sense of discomfort. The Final Chapter finds Alice and her band of misfits returning to The Hive, a digital labyrinth of corridors, angular walls, and booby traps that have lost their metallic luster since the space was first introduced. Like Fritz Lang's technological nightmares, the setting is spun as a foil to the characters, whose acrobatic bodies fight back against the inhumanly rigid world. And by treating CGI as CGI (there's no guise about anything being real in these movies), Anderson makes Jovovich stand out as the only authentic element in his world, and all the better for it.

If the pathos still feels a bit unearned—or entirely unnecessary—Anderson does hit us viscerally with a climax that, surprisingly, isn't a grand spectacle. The closing moments take place within a small, closed corridor as two bodies slowly decay before our eyes (also, there are lasers). The Final Chapter might finally close the books on one of the more oddly resilient franchises in Hollywood, but serves as a reminder of how directors and actors that take silliness seriously can demonstrate care in their creations. As Alice jokes, "All I've ever known is this: running and killing." One hopes Jovovich and Anderson can continue to do the same, even if this grotesquely sublime series has reached its end.

Peter Labuza is a freelance film critic, whose work has appeared in Variety, Sight & Sound, and The Village Voice. Follow him on Twitter.