Seven Foods To Celebrate The Chinese New Year And Where To Get Them In L.A. 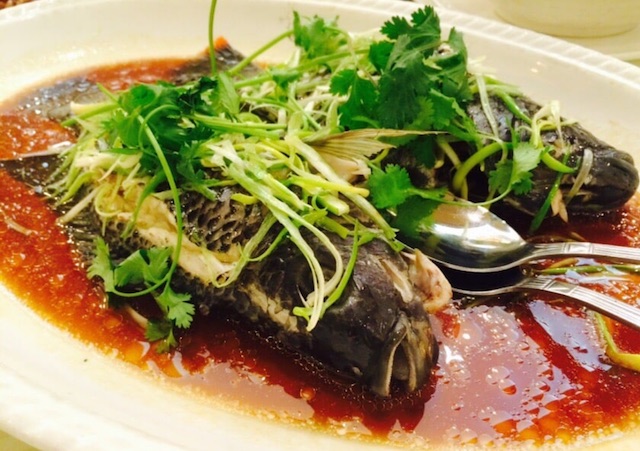 The Chinese New Year isn't exactly a quiet affair. There may be a parade marching down your street. Kids will be throwing "bang snaps" on the sidewalk. And living rooms will be packed with relatives reminiscing on old times (or gossiping about that one auntie). Food, then, becomes a way for everyone to wind down and drown out the commotion. Though it should noted that, yes, the dinner table can get just as boisterous.

Here are some foods that are commonly eaten to celebrate the New Year, as well as leads on where to get them. It's time to treat yourself as the Year of the Rooster dawns upon us—here's to a good one. 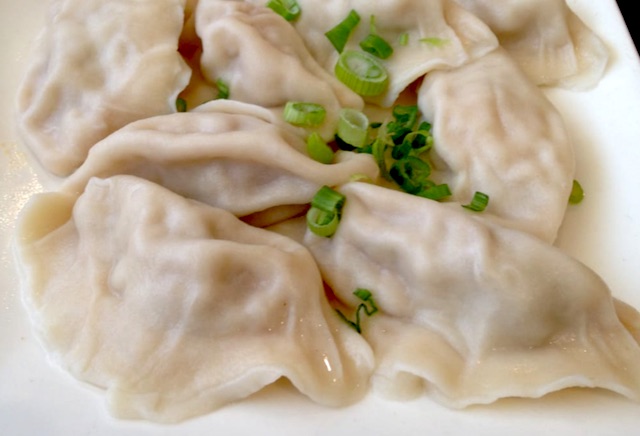 It's a little strange to label dumplings as a "new year food." I mean, is there a time when dumplings aren't warranted? But they do have particular significance to the celebrations (though this largely pertains to the northern parts of China). The shape of the dumplings are said to bear a resemblance to gold and silver ingots, a metal currency that was used as early as the Qin dynasty in 200 B.C. As such, dumplings are believed to be representative of wealth, and that the more you eat the more prosperous you become. Personally, I'm a little skeptical—if it were true I'd be Tai Lopez by now. Anyway, there are lots of places to get dumplings. But Mama Lu's remains a favorite (their lines are definitely shorter than Din Tai Fung's).

Just as you can't have a Thanksgiving without a turkey, you can't have a New Year's Eve dinner without a fish. Often, the fish is bass or tilapia. It's served whole for the family, with the head and tail intact, and is often steamed with ginger and soy sauce. A properly cooked fish would be pliable and juicy on the inside, with the meat almost feeling fluffy in your mouth. In Chinese, the characters for "prosperity" and "fish" are homophones, which means, yes, the fish is also representative of prosperity. As noted at Thinking Chinese, there's a tradition in which families keep leftovers of the fish for the next day; this is said to signify the continual flow of wealth (maybe you can hoard it for a month?). Fish can be found at plenty of spots, but try Capital Seafood if you want the whole banquet experience replete with the din of friendly chatter. 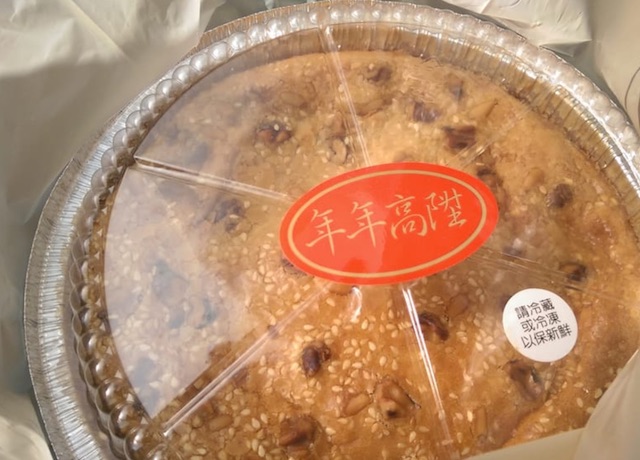 Nian gao is a steamed cake of glutinous rice flour, wheat starch, and sugar, among other things. Brown sugar syrup is stirred in to give it a sweet and fragrant taste. The cake is gummy, which means the flavors will sit with you for a while after you've chewed and scarfed it down. While you can certainly eat it as is, one popular variation is to cut the cake into thin slices and place them in the frying pan for a brief moment. This gives the patties a crunchy exterior that's hard to resist. There's a non-dessert version of the cake, too. The brown sugar is omitted, and the cake comes in little coin-shaped pendants. These can be stir fried with anything that you desire. The aforementioned Mama Lu's makes a great version of this. If you're looking for the New Year's dessert, however, you can hit up A&J Bakery. 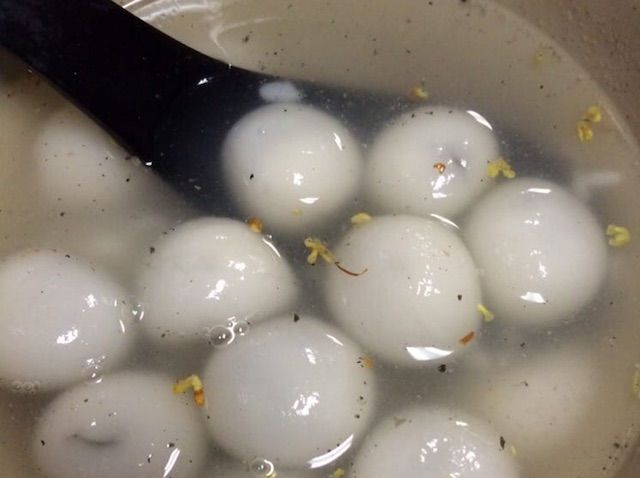 Can't get enough of that glutinous rice game? If so, tang yuan (a dessert of glutinous rice balls) may be in order. The balls are about the size of a tablespoon (sans the handle), and are commonly filled with a black sesame paste that gives the sweetness an added dimension (as well as more sweetness) Other fillings may also be found. Often, the balls come in a bowl pooled with sweet soup. Served hot, the balls are pleasantly supple. Served cold, they're gummy and serve as a nice counter to a warm day. It's all a personal preference. More festive shops will color their tang yuan, turning them into outsized marbles. If you're into mochi, you'll be partial to this dish. Try Emperor Noodles if you're in the mood for this sweet and chewy dessert. 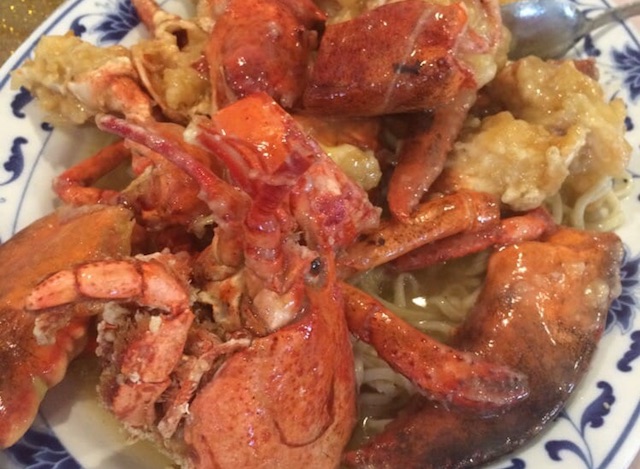 Lobster with yi mein at Town Sent. The noodles are...somewhere in there. (Photo by Tammy T./Yelp)

Talk about literal. "Longevity noodles," which are longer than the average noodle, are meant to represent the many, many years that the eater is expected to live. The term attests to the noodle's length, less so the materials that go into making it, so you could apply it to different noodles. Though its often associated with yi mein, a Chinese egg noodle. It's hard to ascertain who, exactly, has the longest noodles in town. But we've been told that the lobster and yi mein dish at Town Sent Seafood Restaurant is fit to impress. 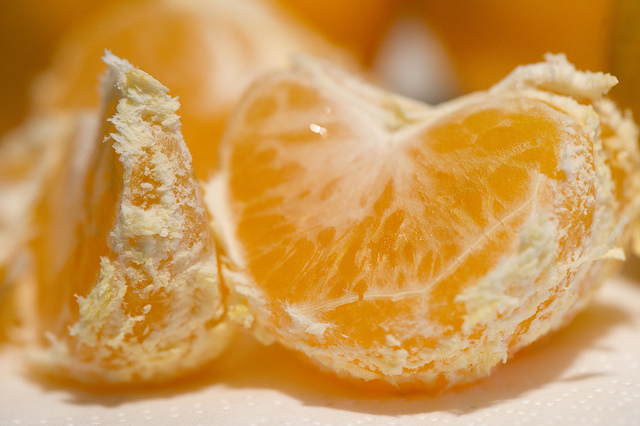 Mandarin orange. (Photo by Simon D via the Creative Commons on Flickr)

There is perhaps nothing more ubiquitous than the Mandarin orange (or oranges in general) during the Chinese New Year. They seem to materialize out of nowhere on your table, as if wily forest gnomes had placed them there while you were asleep (this isn't Chinese lore, it's something I made up). As the orange resembles the sun, it's said to be a symbol of abundance and happiness. And because the fruit is so aligned with positivity, a common act of courtesy is to bring a couple oranges with you when you visit a friend or relative. Certainly, you can find oranges anywhere, but why not make a day of it at the 99 Ranch Market in San Gabriel? It's in the same plaza that serves these giant soup dumplings. 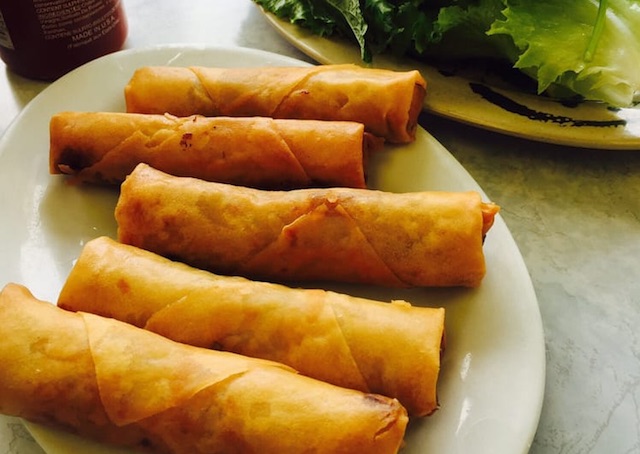 The spring roll exists in a strange lot. They don't generate a lot of buzz. But then you find yourself with a tray of them placed before you, and you go into a sort of fugue state in which you inhale them in quick succession. Apparently, you shouldn't feel guilty about gorging on them, as the golden skin of the fried wrapper (if it's fried) is said to be a symbol of fortune. Also of note, there is a distinction between egg rolls and spring rolls. Spring rolls can be fried, but are sometimes not, while egg rolls are normally fried. Spring rolls are also heavier on veggies and other non-meat options. For practical purposes, you're better off asking the server for egg rolls if you're looking for the fried option (for all that glorious golden bounty). Vietnamese joint Nem Nuong Khanh Hoa serves spring rolls both fried and unfried. If you're looking to order a big batch on the fly (perhaps for a party) you can call up Ba Le.