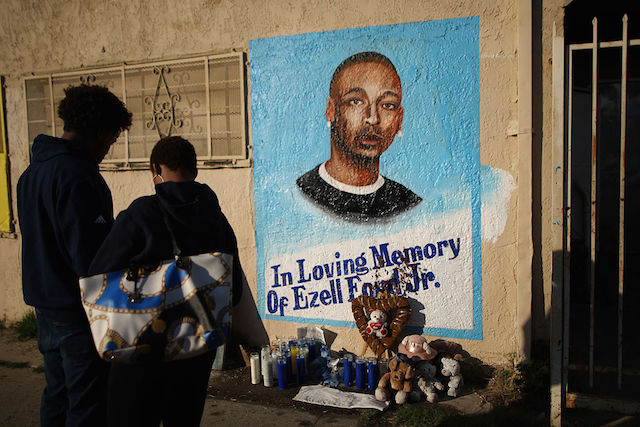 People look at a mural of Ezell Ford at the site where he was shot and killed by two LAPD officers in August, on December 29, 2014 in Los Angeles, California. (Photo by David McNew/Getty Images)

The Los Angeles County District Attorney's Office announced on Tuesday that it will not be filing charges against the two LAPD officers who were involved in the fatal shooting of Ezell Ford.

In a release, the D.A.'s office said that a 20-month review had concluded that officers Sharlton Wampler and Antonio Villegas "acted lawfully in self-defense and in defense of others" when they shot Ford three years ago.

The shooting, which took place on August 11, 2014, began when Wampler and Villegas (working on a gang enforcement detail) approached Ford, then 25, near his family's home in South Los Angeles. The officers attempted to speak with him, but Ford walked away. At one point, Ford walked into a driveway and hid behind a car. LAPD Police Chief Charlie Beck later claimed that, when Wampler caught up with Ford, Ford forced the officer to the ground.

The D.A.'s office claims that Ford had gotten on top of Wampler, and a report later stated that Ford's DNA was found on Wampler's holster, which apparently corroborates allegations that Ford had reached for the officer's gun.

Villegas shot Ford twice during the encounter. And Wampler, while he was still struggling with Ford, pulled out his backup weapon with a free hand, reached around Ford, and shot him in the back, according to the report.

In 2015, both Wampler and Villegas were cleared by the LAPD and the Police Commission, the police department's civilian watchdog. And in 2016 the officers would sue the city, claiming that they became victims of racial injustice in the wake of the shooting.

As reported by the L.A. Times, Ford had been diagnosed with bipolar disorder and schizophrenia in the past.

In November, Ford's family reached a settlement with the City of Los Angeles. The terms of the agreement were not publicly disclosed.