Everything You Need To Know About The L.A. Women's March 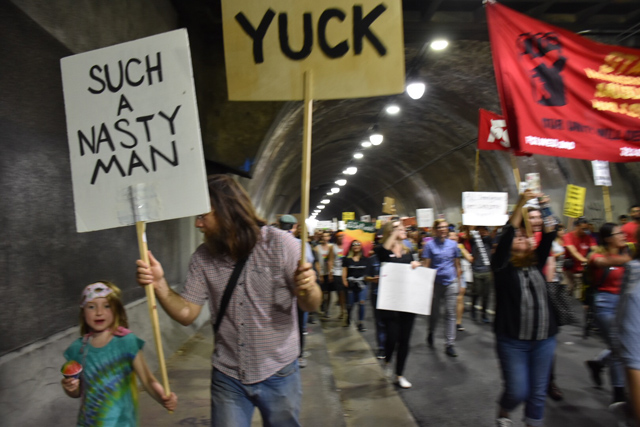 Tens of thousands of Angelenos are expected to descend on downtown Los Angeles Saturday morning for the L.A. Women's March. The route will start at Pershing Square and continue on to City Hall. The march will begin at 10 a.m., though organizers recommend arriving at 9 a.m., as there will be speakers and sign making prior to the official start. Here's the lowdown on everything you need to know.

Getting There
Given the high volume of people and street closures, one can only begin to imagine what a complete and total shit show downtown will be on the day of the march. We highly recommend taking public transportation or ride sharing services to the march.

If you are taking a ride share, street closures will likely make it difficult to get dropped off in the direct vicinity of Pershing Square, so consider choosing an end point a few blocks away.

If you're going Metro, you can take the Red Line to Pershing Square, or the Blue or Expo lines to 7th St/Metro Center Station, which is just a few blocks away from Pershing Square. If you're not a regular Metro rider, we recommend buying a TAP card ahead of time and loading it up with a day pass ($7) so you don't have to brave potential long lines on the day of the march. Reloadable TAP cards cost a dollar and can be purchased at any Metro station, along with a variety of other locations around town (enter your Zip Code here to find a vendor near you).

According to Metro spokesperson Kim Upton, the transit system is preparing for the influx of riders and adding additional rail cars to both their light-rail and subway lines, which will increase rider capacity.

The Route
The march will go from Pershing Square to City Hall, where a rally will be held. The exact route won't be released ahead of time, but organizers say that it is approximately two miles roundtrip, according to the Facebook event page.

What You Should Bring
Wear comfortable shoes. Backpacks will be allowed, but be aware that it will be crowded and you won't want to be carrying anything too heavy. Food trucks and water will be available along the route, but we recommend bringing along some bottled water and snacks so you can make sure your personal needs are met. An external phone charger is also always a good idea!

No alcohol, weapons of any kind, or dogs or pets (except service animals) will be allowed.

Signs
You can (and should!) bring your own signs, and they can be on sticks, but there are a few rules you need to adhere to. Los Angeles Municipal Code Section makes it a misdemeanor to possess during a demonstration, rally, picket line or public assembly any length of wood that is more than one-fourth of an inch thick, and more than two inches wide, so please—for everyone's safety—no giant sticks.

Staying Safe
The march will be extremely crowded, so it might be difficult to stay with a large group. Implement a buddy system, and make sure you have your buddy's back. Designate a meeting place and time where you can find your friends if you get separated, and make sure everyone is clear on where it is, and how to get there. Write down your friends' phone numbers and any other relevant information on a piece of paper, and keep it with you so you can still reach them in case your phone dies.

If you have any allergies or important medical information, consider writing it on your arm in Sharpie in case of emergency.

Knowing Your Rights
We spoke with Kelli Soto, a community engagement and policy advocate at the ACLU of Southern California, about how to safely and legally exercise your First Amendment rights. "In general, don't block the sidewalks. Make sure you're not blocking entrances to any buildings, and that you're marching within the boundaries that are specified," Soto explained. She also stressed that marchers should refrain from physically confronting counter protesters under any circumstances, for obvious reasons.

On "the 'do' rather than the 'don't' list," Soto said that attendees should "employ their creativity," and "make sure they are enjoying themselves in having this moment of unity. It's really important." The ACLU's full "Know Your Rights" guide for protesters can be found here.

The Schedule
The march is expected to last from 9 a.m. to 4 p.m. Here's the full schedule of speakers for the pre-march kick off, and the City Hall rally, per the official website: