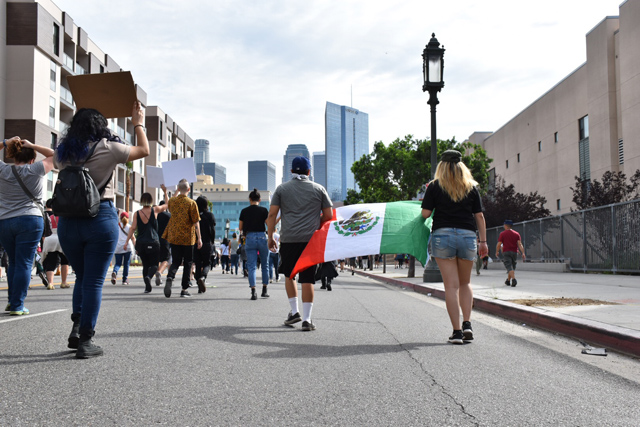 By Melissa Chadburn with Amelia Gray

I come from light bulb crunchers, bed-of-nail walkers, fire-eaters. By the time my lola (grandmother) came here she would be giddy with shopping fervor at any swap meet, all of us hollowed out like empty mango shells. My lola’s kitchen floors were brown and white diamond checkered, every top drawer filled with little boxes of broken chalk for killing ants and roaches. She had big rubber fly swatters. She rested unplated sandwiches on the arms of chairs, and always had an open saucer with half melted butter on the kitchen table, a block of Velveeta cheese in the freezer, a full rice cooker on the counter. She ate with her teeth floating in a glass of water next to her. Lola was short and dreideled around with the shadow of her previous graceful self. She maintained perfectly manicured fingernails and was beyond denial that she was no longer thin and had never been rich.

She is from Quezon City, Philippines, which is now home to film collectives, glitzy transgendered women, and shabuheads. Shabu is street for crystal meth. My people are poor. We come here in pursuit of hard work that pays. Los Angeles County is an economic and cultural hub drawing particular strength and benefits from the integration of immigrant communities. Immigrant contributions to the economy—in terms of labor, investment, and entrepreneurship—sustain an integral part of Los Angeles County’s economic engine and vibrant culture. The overall immigrant population of Los Angeles County is 3.5 million. Of these, an estimated 814,000 are informal immigrants, most living in families of blended immigration status. Immigrant communities shape Los Angeles County’s social fabric, upholding its very structure and sustainability. If mass deportations take place, L.A. County would be largely impacted. This made me more than eager to read Sheriff McDonell’s promise to immigrants.

In his January 7 op-ed, Sheriff Jim McDonnell writes that his department does not have the authority or personnel to “participate in mass deportations.” But “participate” here is an interesting word. Participation in deportation doesn’t have to mean loading people onto busses bound for Mexico. Participation can mean granting computer access to agents from the Department of Immigration and Customs Enforcement (ICE), or allowing ICE to detain inmates after charges have been dropped. Participation can mean creating a climate where children are afraid to return home from school to find their parents have been deported.

Our detention system shouldn’t allow bias to dehumanize, demoralize, and defraud its residents. Referring to your detainees as “violent predators” preying on their communities is dehumanizing work, and as Martin Luther King Jr. said, “Any law that degrades human personality is unjust.” We’re not going to buy into distinctions between humans and predators any longer.

Enough with words. These are the facts: in L.A. County, there is no recognized right to appointed counsel in deportation proceedings. People with counsel are five times as likely to win their cases, but 70 percent of people are unrepresented. All people should have a right to legal representation, regardless of their crime.

Data taken from ICE in 2015 shows that the department screens over five hundred immigrants per month in Los Angeles County jails. Of these, approximately 90% are Latinos, though Latinos only make up about 48% of the population. Many have no prior criminal convictions, and have not yet been convicted of a crime. Nothing prevents ICE from pursuing these individuals after release, and reports coming out of L.A. County jails support the fact that this is already happening. Allowing an ICE dragnet across our jails effectively opens a backdoor for an aggressive erasure of human rights.

McDonnell’s overall piece tries to strike a hopeful tone. McDonnell concludes with the sentiment that he has enormous faith in the rule of law, and an understanding in the apprehension of the unknown, which is convenient for him given that he helps implement the law. Let’s not forget his predecessor is currently being held on charges for lying during an investigation on civil rights violations. Local communities have an apprehension of the known, with its roots reaching deep into his department.

This is the reality of McDonnell’s department: right now, inmates can be transferred from LASD to ICE custody without so much as a word sent to their families. They can be detained indefinitely in ICE custody. Upon release, former inmates have reported ICE agents appearing at their homes or their children’s schools, suggesting ICE continues to make the most of their access to LASD computer records.

Arnulfo, a former inmate, reports that he was interviewed by ICE in jail without being informed that he could refuse the interview. “I was pressured to sign my deportation,” he says, “even though I said I was afraid to return to El Salvador. I’m fighting my deportation but it’s a real strain on my family. My brother had to pay my bond and we have to pay $400 a month for the shackle on my ankle.” Right now, federal immigration enforcement benefits from criminally low oversight, and LASD has become complicit in policies and procedures which threaten families and contribute to the fear felt in neighborhoods across the city.

Every member of our immigrant community is valuable, from Arnulfo shackled at the ankle to my lola with her shopping fervor. This is a chance for our community to stand strong against federal entanglement in local law, setting the tone for trust in local law enforcement. All concerned citizens should push for increased funding for services, intervention, treatment and rehabilitation programs to promote immigrant integration. We should call on our Board of Supervisors to develop and fight for strong and lasting policies and procedures to keep ICE out of our prison system. In its immigrant rights decisions, Los Angeles is poised to take a stand in human rights and to lead reform in California.

Melissa Chadburn is a fellow for The Economic Hardship Reporting Project. Her 2012 essay, “The Throwaways,” received a notable mention in The Best American Essays and Best American Nonrequired Reading. Her debut novel, A Tiny Upward Shove, is forthcoming with Farrar, Straus, and Giroux.

Amelia Gray is the author of four books, most recently Gutshot (FSG). Her work has appeared in The New Yorker, The New York Times, The Wall Street Journal, Tin House, and VICE.

Chadburn and Gray are members of ICE Out Of LA, a coalition comprised of community members from around Los Angeles County united in opposition to deportations and the criminalization of migrants.