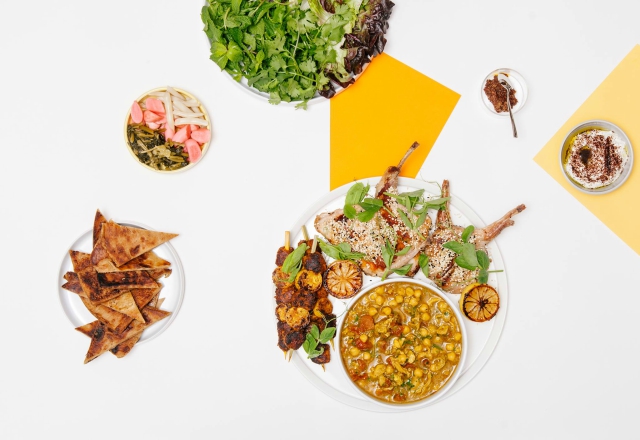 "Rabbit for two" with flaky bread, greens, pickles, tahini and yogurt. (Photo By Kismet via Facebook)

Remember the name Kismet, because you're going to be hearing a lot about it this year. The restaurant, opened by Sarah Hymanson and Sara Kramer of Grand Central Market's Madcapra, with operational support by Jon Shook and Vinny Dotolo (Animal, Trois Familia, et. al.), had its first official day on Sunday.

The space, tucked in next door to the Silverlake Conservatory of Music along a blossoming stretch of Hollywood Boulevard, greets diners with little more than the neon-peach glow of its signage, and the gold numerals of the location's address done in Kismet's idiosyncratic font.

Co-chef Kramer told LAist that she and Hymanson chose the block not only because it's blowing up (see: Got Get 'Em Tiger, McConnell's Ice Cream, Bar Covell, Umami Burger), but because it is the nexus of three neighborhoods. Kismet's side of Hollywood Boulevard is technically East Hollywood, the opposite side is Los Feliz, and down the street is Silver Lake. "We're Eastsiders," Kramer added. "This is our neighborhood." 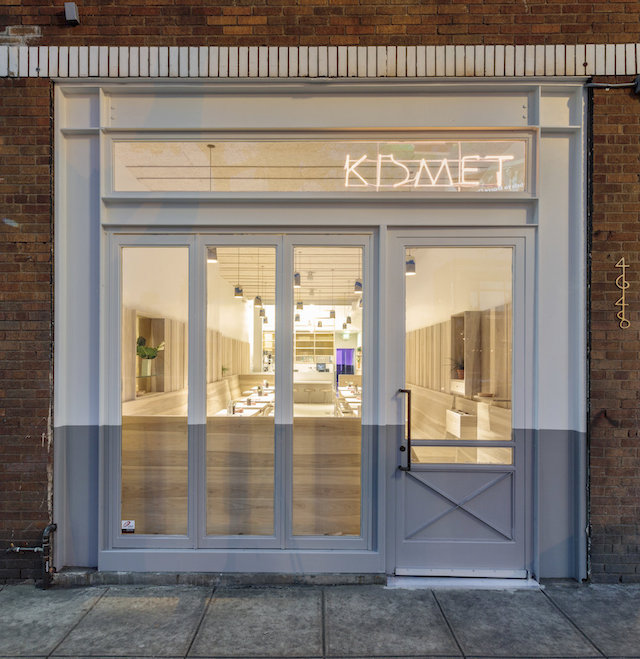 Once inside, the simple storefront opens into two long, clean rows of blonde wood banquettes and the rustic minimalism that is oh-so-trendy today. It's casual and welcoming, and the subtle nuance bodes well for the food.

Kramer describes the menu as Middle Eastern-inspired, but definitely not traditional. She uses the flavors of her heritage (her mother is Israeli; "Israeli food is in my blood, trend or not") to inform the dishes, and though there is a serious background, it is just a starting point. Kismet's ambitions are layered with something more personal: it is an homage to Los Angeles. The restaurant will no doubt become a culinary representative of the city to eaters well beyond its borders. 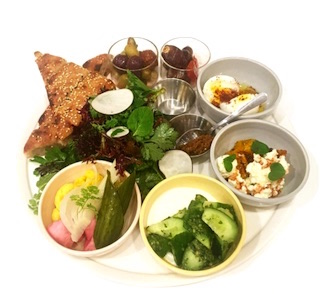 "Turkish-ish" breakfast. (Photo courtesy of Kismet)
"We want it to be an all-day spot that's great for Los Feliz and great for L.A.," Kramer said. She and Hymanson designed the menu with a technical eye, but the end goal is a meal that is comfortable and sharable.

The daytime menu includes wonderful twists on modern L.A. staples like broccoli toast with labneh (a Middle Eastern version of Greek yogurt), za'atar squash tart (za'atar being a traditional Middle Eastern spice blend centered around sumac and sesame seed), and a smorgasbord of sorts tongue-in-cheek-ly referred to as the "Turkish-ish" breakfast.

For dinner, the menu's spotlight stays on California's abundance of fresh and local produce, with a few notable exceptions.

The lamb belly is built around tender, juicy pieces of the meat. Its rich umami flavor is cut by the sweetness of a carob and Meyer lemon sauce that tastes almost of caramelized apple. The Magic Myrna potatoes, another main course dish, pairs potatoes made perfectly sweet with the bright tartness of labneh.

It's recommended to order main courses with a side of the jeweled crispy rice. The dish is reminiscent of Persian tahdig, and has a satisfying crunch, along with a popcorn-y butteriness. Gooey egg yolk is hidden inside the hardened mound, adding saltiness to balance the staccatoed sweetness of raisins. 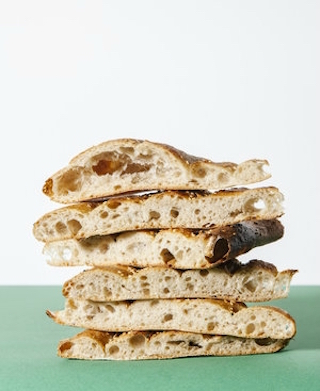 Barbari bread. (Photo courtesy of Kismet)
Some smaller dishes of note are the Tokyo turnips, which come with a smear of cultured butter. The raw turnips' strong, sharp taste is mellowed by the butter, whose fragrant rose after taste leaves you wanting more.

The Persian cucumber salad is as light, crisp, and refreshing as a cool dip in a pool during a Los Angeles (or Arabian) heatwave. The long-cut cucumbers are topped with parsley and mandarin orange slices. A labneh base grounds the dish.

You'll be forgiven if the Barberi bread is the thing you remember most. The hardy crust (toasted to perfection and topped with sesame and poppy seeds) gives way to a pillowy core that, once finished, you'll immediately want to order more of. The waiter may suggest you use it to sop up juices from your many dishes, but this could easily be a meal unto itself.

Middle Eastern food may be having a moment in the Los Angeles dining scene, but Kismet is positioned to be around well after the wave passes.