What's Keeping Those Freeway Interchanges Up In An Earthquake? 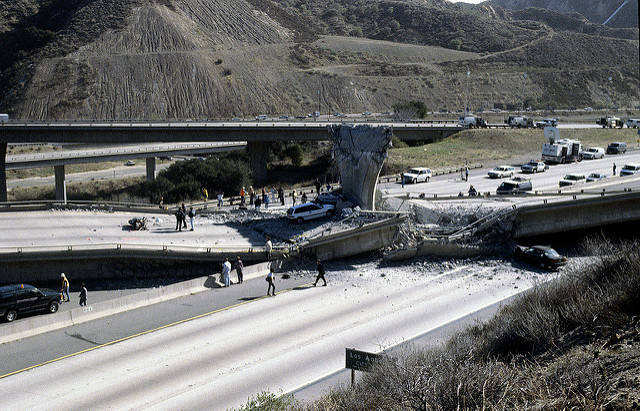 The Newhall Pass Interchange after the Northridge earthquake. (Photo by H Salazar via Flickr)

Nearly 23 years ago, on January 17, the Northridge earthquake gave Los Angeles its last good rattle. The magnitude 6.7 quake left north of $41 billion in damages across the region, including nine bridges felled across the Southland. One of the most famous (and photographed) of these failures was the Newhall Pass Interchange connecting the 5 and 14 freeways. The overpass's collapse killed LAPD motorcycle officer Clarence Wayne Dean, for whom the interchange is officially named for today.

The California Department of Transportation has spent nearly 30 years identifying and retrofitting some 12,000 state-owned bridges and overpasses to ensure this nightmare scenario doesn't happen again.

The task initially began after the 1989 Loma Prieta earthquake (centered south of San Francisco), which severely damaged the San Francisco-Oakland Bay Bridge and the Cypress Street Viaduct. Caltrans began phase I of their seismic retrofitting program that year—ultimately spending $1.07 billion to identify 1,039 state-owned bridges and bring their safety standards up to regulation. After the 1994 Northridge quake, the department began phase II of the program, which added another $1.7 billion to identify and retrofit 1,155 additional state-owned bridges.

"Retrofitting works," then-Caltrans Director James van Loben Sels told the L.A. Times in 1994, following the quake. "We had graphic evidence in the Northridge quake that our retrofit program is performing as intended. All 114 retrofitted bridges in Los Angeles came through the temblor in fine shape."

In 1997, the California state legislature then focused on the nine state-owned toll bridges (including the San Francisco-Oakland Bay Bridge) and began allocating funds to retrofit these spans.

"The legislated state bridge seismic retrofit programs (Phases I & II and Toll Bridge) are complete," CalTrans told LAist in an email. "The Schuyler-Heim bridge replacement project in Long Beach, the last bridge to be retrofitted in the Phase II program, is still under construction. However, the seismic safety objective has been achieved since traffic has been shifted onto one of the twin bridges being built on the project."

CalTrans noted that, while the Golden Gate Bridge is not a state-owned toll bridge, but a locally-owned bridge under its own special district, the following nine toll bridges are owned by the state of California, and were retrofitted:

"The Local Bridge Seismic Safety Retrofit Program is 86% complete," CalTrans added. "1242 bridges were programmed. As of Dec 2016, 1071 bridges have been retrofitted with a total construction cost of approximately $1.35B. Remaining bridges are still in the design and construction phases."

As for the actual details of the retrofitting, here are the basics. Old concrete columns, which lack the modern spiraled steel rebar holding the concrete together, have been wrapped in a steel casing. Columns built on soft soil have had their footings expanded and piles driven deeper into the ground. Finally, joints connecting spans of bridge road have been strengthen with cable supports as well as hinge extensions. 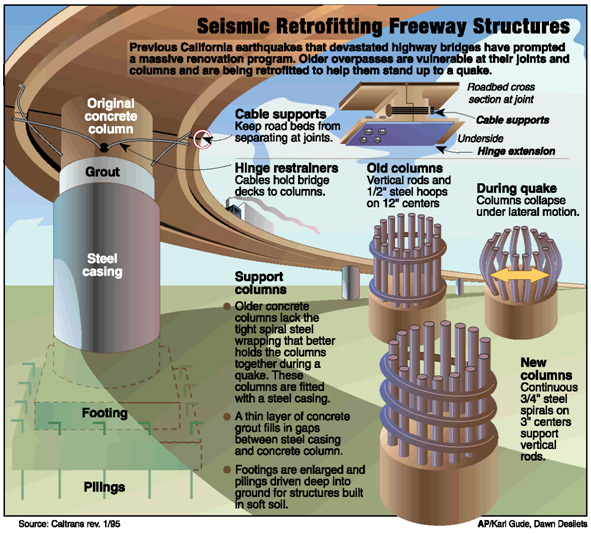 CalTrans told LAist, "...the evolution and improvement in CalTrans Seismic Design Criteria is continuously updated to incorporate state of the art practices in earthquake engineering including the discovery of new faults, increase in ground shaking hazards, and improvement in technologies for seismology, seismic analysis, and bridge retrofit."

So while no one knows when the next big quake will hit, next time you're driving through an interchange, just try to imagine you're in the opening scene of "La La Land".