January in Los Angeles is the closest the city gets to winter. Gray skies, brief rainstorms and a not-so-bone-chilling chill visit Southern California, all welcomed guests for the otherwise perennially sunny region.

The morning of January 15, 1947 was nothing out of the ordinary. Betty Bersinger and her three-year-old daughter were walking around their Leimert Park neighborhood when Bersinger noticed something odd in a vacant, weed-filled lot on 39th Street and Norton Avenue. “The thought of a dead person did not enter my mind,” she later recalled about her discovery. “I thought it was a mannequin because it was so white.” 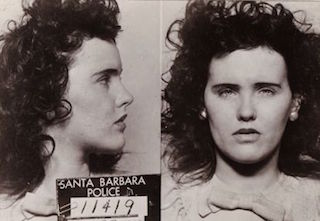 Short's mugshot for underage drinking. (Photo via Wikimedia Commons)
Unfortunately for Bersinger, she hadn’t stumbled upon a the remnants of an art project gone awry. Instead, she had found the naked, mutilated body of 22-year-old Elizabeth “Betty” Short, whose given name was soon eclipsed by moniker of her demise: the Black Dahlia.

Bersinger’s observation was in no way hyperbolic. Short has been sliced in half at the waist and drained of blood, both done with such precision that one of the case’s original investigators Detective Harry Hansen concluded that her killer was most likely a "top medical man" and "a fine surgeon." Short also suffered a blow to the head, various wounds throughout her body in which chunks of her flesh were cleanly cut out, and her face was sliced from ear to ear in a grisly “Glasgow Smile.”

After Bersinger alerted the authorities, droves of police and reporters descended upon Norton Avenue, but it was the Los Angeles Examiner who managed to strike a deal with the LAPD: the paper would transmit the victim’s fingerprints through the wirephoto system and in return the police would give them exclusive press rights to the identification on the macabre killing. The police accepted—the cops and the press were a little too intimate in that era—and by the next day, Short’s identity was confirmed through a set of fingerprints from 1943 when she was arrested in Santa Barbara for underage drinking.

The Examiner then had the task of breaking the news to Short’s mother, Phoebe. Today their tactic would be shamed, stamped as cruelty masquerading under journalism, not to mention utterly void of ethics; the newspaper called saying that her daughter Elizabeth had won a beauty contest and after collecting personal information from the gushing and proud woman, informed her that the reason for the call was because her daughter was found murdered. They then flew her out to Los Angeles and hid her their competition to secure their monopoly on the story and cement their lack of morals.

One of these competing newspapers was the Herald Express, who at the time had a reputation for nicknaming murder cases. They had coined the "White Orchid Murder" and the "Red Hibiscus Murder," but the Black Dahlia was not their creation. The name had been attributed to Short while she was alive and staying near a Long Beach drugstore. It was a pseudo-portmanteau, a combination of the 1946 noir flick The Blue Dahlia and Short’s penchant for sporting sheer, black clothing.

The nature of the killing threw the media into a frenzy as newspapers wove a salacious role for Short, casting her as a licentious seductress who overstepped her boundaries, and unknowingly cementing her in history as a noir cautionary tale. In reality, Short was an unassuming girl, one of many who flocked to Los Angeles with lofty hopes of making it as an actress, only to find her sought-after fame post-mortem as the star in one of the city’s most gruesome slayings. A girl from Medford, Massachusetts, she had adopted a nomadic lifestyle upon her move to California at nineteen years old. She never stayed in the same place for more than a few weeks and maneuvered around her perpetually broke existence by going on frequent dates, knowing that with the male attention came the promise of a free meal.

The chaotic hunt for Short’s killer began as police poured through suspects. The first was Robert "Red" Manley, a pipe clamp salesman from San Diego and the the last known person to have seen Short alive. Manley had driven short to the Biltmore hotel downtown six days prior to Bersinger’s sighting of her body. According to Manley, Short checked in her luggage before disappearing. Naturally, LAPD detectives were suspicious, but after passing a polygraph test, Manley was free to go.

Nine days after her remains were found, the Los Angeles Herald-Examiner received an envelope full of Short’s personal belongings. Inside was her birth certificate, social security card, and photos of an address book, all sent from the apparent killer. The envelope featured clippings from movie advertisements, including the phrase "Heaven is HERE!" The address book led to approximately 75 men who all had similar interactions with Short: they met her at a bus stop or a street corner, went to a meal or club with her and never heard from her again. Nothing conclusive was ever discovered.

Perhaps Short would have received her justice if she had been killed in a different era. Instead, her legacy spans decades of conversation, books and films devoted to analyzing her ending. She never achieved fame in her earthly form, but as part of the Los Angeles’ mythos, she is immortal.