Was The Cheeseburger Invented In Pasadena? 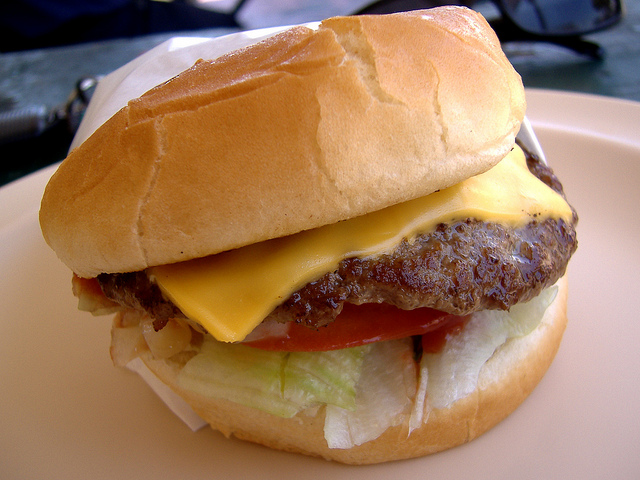 A cheeseburger from The Corner Cottage in Burbank. (Photo by Doran via the LAist Featured Photos pool on Flickr)

On Thursday, the Pasadena Chamber of Commerce unveiled a plaque that was inserted into the sidewalk outside of the LA Financial Credit Union at 1520 W. Colorado Blvd. The honoree? The late Lionel Sternberger, who was purported to have created the cheeseburger at The Rite Spot back in the mid-1920s.

As with any claims of a food's origin (like, who created the French dip?) many of the accounts are based on hearsay. According to Paul Little, president and CEO of the chamber, there are mainly two versions of the cheeseburger's genesis. The first story says that, one day, a transient had passed through the doors of The Rite Spot and—feeling jubilant from having come upon 15 cents—asked for a burger with absolutely everything on it. Sternberger took this literally and reached for everything he had at his disposal, which included cheese. It was perhaps a bit tongue-in-cheek, then, that this new burger was installed on the menu as an "Aristocratic Burger." 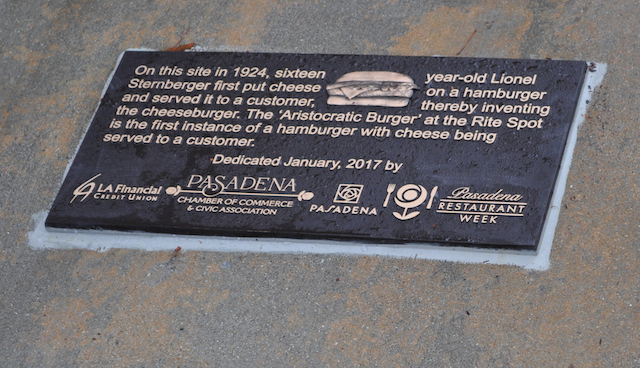 Lionel Sternberger's plaque. (Courtesy of the Pasadena Chamber of Commerce)

The other story is a bit more mundane: Sternberger had burned one side of a patty because he wasn't being mindful, and he plopped down a slice of cheese to bury his mishap. "[Sternberger's] brother said he liked to fool around with the food and try different things," Little told LAist. "He was just a teenager back then."

This is all fine and good. But is there any evidence to bolster the claim and hold it above lore? There is, and it can be found at the Pasadena Museum of History, which has an old menu from The Rite Spot (the restaurant was shuttered long ago). On the menu—afforded its own space in the upper corner—is an “Aristocratic Hamburger” that’s listed at 15 cents. It’s described as “The Original Hamburger with Cheese.” This seems to be solid proof, but, as noted in an L.A. Times article, the menu is undated. Trapp Printing Co. in Glendale, which produced the menu, closed down in 1939, so we can safely assume, at the very least, that the menu existed in the 1930s. Little, however, believes that the menu is from the 1920s, and that it's the earliest, existing documentation of the cheeseburger's existence.

This distinction between the '20s and the '30s is important, as cheeseburgers had become a semi-popular thing by the '30s. As reported by the Times:

By the 1930s, cheese and other toppings were well established as burger add-ons, said Andrew F. Smith, a lecturer on food studies at New York University and author of several books, including "Hamburger: A Global History."

"In the 1930s, you name it, and people started putting it in burgers," said Smith, who traces the initial popularization of the hamburger to street vendors outside the 1893 World's Fair in Chicago.

So, if Sternburger’s story was to hold up, he’d had to have popularized the cheeseburger in the ‘20s (as it is claimed), before it had already become a common item.

Certainly, there are other places around the U.S. that take issue with Pasadena’s claim. “In 1944, a court awarded the copyright to the term 'cheeseburger' to the owner of a restaurant in Denver, Colo., who claimed to have invented the concept in 1935,” said another Times article. "One time, a radio personality in Wisconsin called me to dispute the claim. He said, 'We have cheese and we have cows,'" said Little. "But when I asked him for evidence [that Wisconsin originated the cheeseburger], he didn't come back with anything."

There’s also Kaelin’s Restaurant in Louisville, Kentucky—they branded themselves as the true originators of the cheeseburger. While the space has closed down a few years ago, it has its own plaque that boldly proclaims its place in burger lore. Though the plaque seems to designate 1934 as the year of the cheeseburger's birth, which suggests that Kaelin's was actually late to the game. 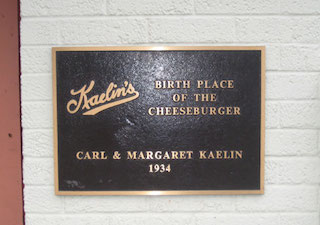 The plaque at the former Kaelin's. (Courtesy of the Greater Louisville Inc.)
“I grew up here, and for as long as I could remember, there was a sign outside that said they created the cheeseburger,” Alison Brotzge-Elder, communications manager at Greater Louisville Inc., the city’s chamber of commerce, told LAist. “But I don’t know how seriously the locals took the claim.” She also noted that the University of Louisville basketball team claims to have invented the high-five, which is to say that claims like these are easily disseminated, and very difficult to prove.

Adding even more to the confusion, Times readers claim that Sternburger had created the cheeseburger in another location of The Rite Spot, one that was in Highland Park. These claims, however, lack basis, as the Pasadena Rite Spot is better-documented as Sternberger's place of employment.

And one last bit of trivia: Bob Wian, who founded the Bob's Big Boy chain, reportedly started out working at The Rite Spot in Pasadena.

This is a whole lot to chew on. And we may have to accept the fact that we’ll never be 100% sure where the cheeseburger came from. (And does it matter? Is its existence not enough for us? Because cheeseburgers are great.) But feel free to ponder these pressing questions in the (alleged) hometown of the cheeseburger; Pasadena’s annual “Cheeseburger Week” will be taking place from January 8 to January 13. About forty of the city’s restaurants will be offering new, off-menu items, as well as discounted prices. Check here for a listing of participating restaurants. Visit Pasadena has a list of themed burger “crawls” to guide your way.