Thanks, Drybar: It's Now Legal To Drink At Your Salon Or Barbershop 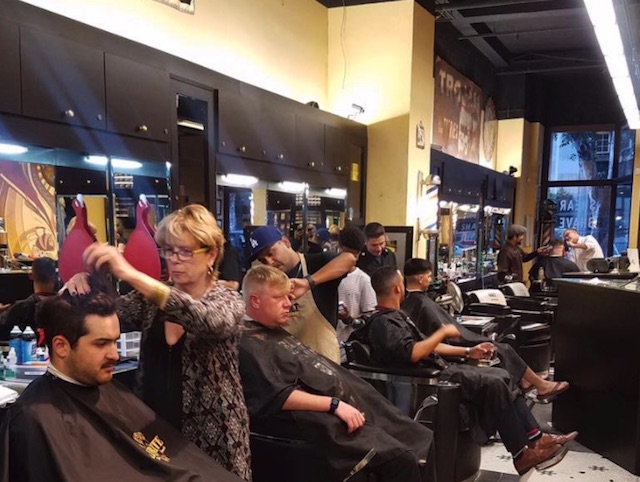 Out at downtown's Bolt Barbers, where you can sometimes get beer. (Via Facebook)

In the Southland, you can pair a martini with a matinee at the theater. You can also nurse a Manhattan as you ponder your next ride at Disneyland. Libations are also common at salons and barbershops. An IPA with your trim? A glass of Merlot as you get your highlights done? No problem.

Though, up until this Sunday, it wasn’t technically legal to drink while you’re getting a haircut; an establishment would need a proper liquor license to sell alcohol, of course. And as for complimentary drinks, the law gets weirdly specific, allowing them to be served “in a limousine or as part of a hot air balloon ride service,” but not necessarily at a salon or barbershop.

That all changed on January 1, when Assembly Bill 1322 went into effect. The law, which was signed by Governor Jerry Brown back in September, allows for the serving of wine and beer at salons and barbershops, granted that there’s no charge. The bill is also geared at preventing you from getting sloppy drunk; no more than 12 ounces of beer or six ounces of wine can be offered to an individual, and alcohol may not be served past 10 p.m. Of course, the booze will only be served to people of legal age.

Drybar, a high-end chain of salons based in Brentwood, was a major force in pushing the bill through. Founder Alli Webb told ABC 7 that a glass of wine was always part of the salon's M.O. “That was something women were talking about—why they loved Drybar—they loved getting their hair done, they love the confidence they had when they went out the door, but they also love having a glass of wine while sitting here," said Webb.

Steven Moran, owner of Santa Monica’s Active Barbers (which serves beer “every once in a blue moon”), told LAist that it’s about evoking a kind of communal experience. “I see it as a way of building a relaxing environment. You can come to the barbershop to unwind and get away from the real world a bit. [The drinks] make people ease up. They crack more jokes,” said Moran, adding the disclaimer that they “don’t serve too much, not enough for everything to get crazy.”

So no, it's no mystery why a glass of wine could go well with a haircut. You're already sitting there, so you may as well wet your whistle a bit. Cheers. And here's to your next haircut being a great one.