9 Hearty Soups To Warm You Up During The Winter

Winter has finally descended upon Los Angeles, which means it's time for some hearty soups to warm you up—or to cure that post-New Year's Eve hangover. Being L.A., we're a little spoiled as we have the best Korean food outside of Korea, which means plenty of soups that are suitable for replenishment. If that's not your thing, however, we also have great Thai boat noodles, pho, matzo ball soup, and menudo to help you brave the bitter cold of a Southern California January. Take advantage now before it gets too warm again! 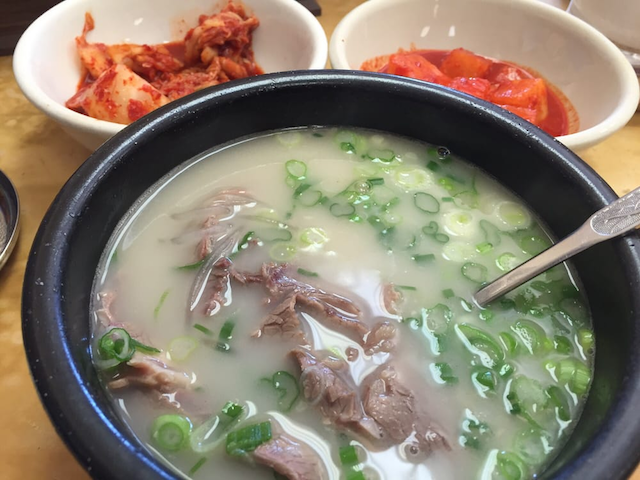 This Koreatown joint practically has one item on the menu—you just choose which parts of the cow you want in your seolleongtang, or ox bone broth. Tongue's always a good bet, their brisket is tender, and the offal (intestine, tripe and spleen) gives you a great variety of flavors and textures. If you're stuck, why not just opt for all of the above and go with the mixed soup? Served to you as a milky white broth, you flavor it to your liking with salt, green onions, and chili paste. Whether you choose to mix your rice or kimchi into the soup is up to you. Expect a line of hungover people here every Saturday and Sunday morning. 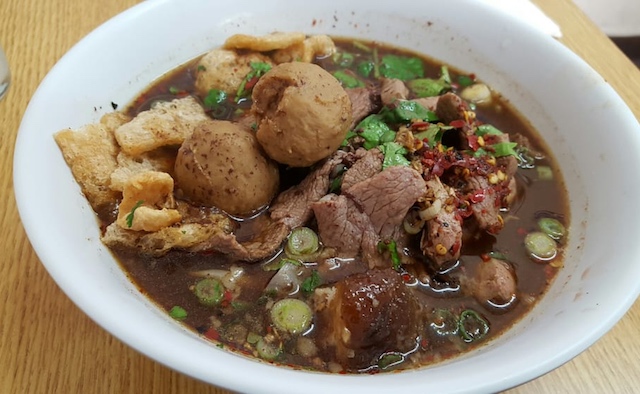 Impossibly rich with some of Thai Town's most complex flavors, Sapp's boat noodles are one of L.A.'s truly knockout dishes. The broth is a murky, iron-rich concoction that's spiked with enough chili, lime and blood that you won't need to do any additional seasoning on your own. You can get it with regular cuts of beef, but you'll want to opt for the offal version with tendon, tripe and liver. It's also an incredible gradient of textures, with the slippery rice noodles and the cracklings to top it all off. 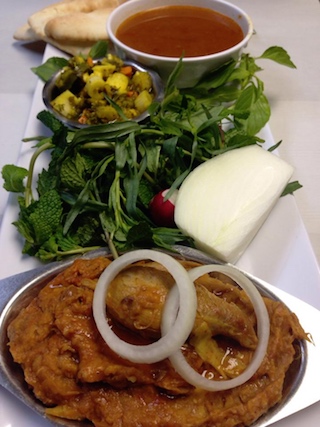 A sort-of deconstructed stew, ab-goosht is a Persian lamb stew that's served with the meat and the chickpeas strained from the broth. Don't worry, the hearty broth is on the side. You'll be given flatbread, wedges of raw onions, and greens to eat the ab-goosht however you like. We recommend sharing it with a friend, and know that it's only served on Fridays. If you find yourself here on any other day and you're still feeling like soup, there's always the vegetarian osh, a creamy green monster of spinach and lentils that's topped with swirls of yogurt and caramelized onions. 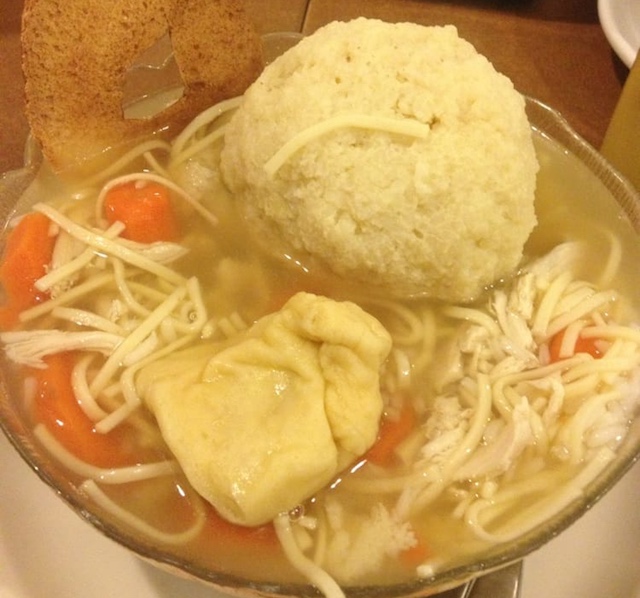 Look, you can reasonably argue for Greenblatt's or Langer's over Canter's. You're probably right. But if it's three in the morning and I find myself craving that briny chicken noodle soup with a giant matzo ball, only Canter's will be there for me. A Langer's #19 can wait for another time. 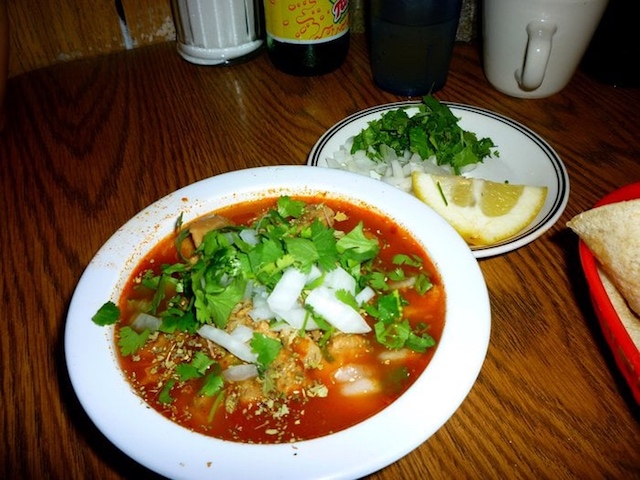 Menudo with all the fixins' at La Abeja (Yelp)

Unapologetically red and chock full of enormous chunks of tripe, La Abeja's menudo is just what you need on Sunday morning if the lines are too long in Koreatown. Get it with some of their huevos rancheros on the side. 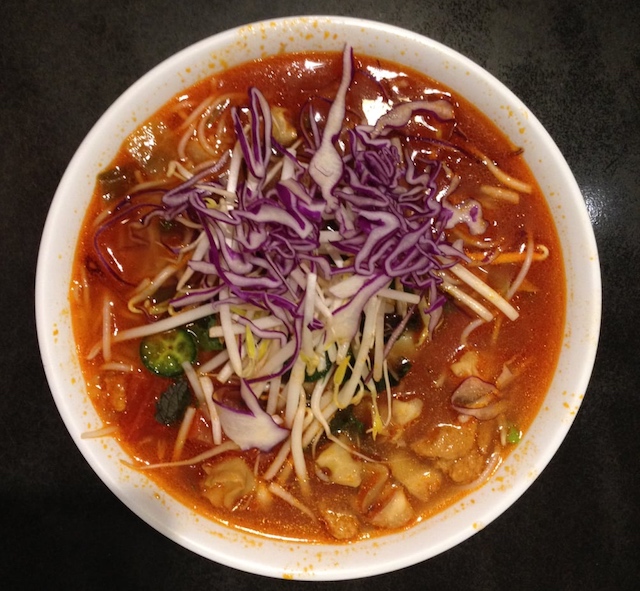 When you're tired of pho and want to branch out into the other wonderful soups that make up Vietnamese cuisine, there will be bun rieu. Not as bold as bun bo hue, which is a mildly spicy soup with lemongrass and pork blood, bun rieu is a tangy tomato-based broth whose flavors are delicately balanced with a hearty helping of shrimp paste. Any number of Vietnamese noodle shops will have it, but we especially like it at Saigon Flavor—you can even get it with snails there. 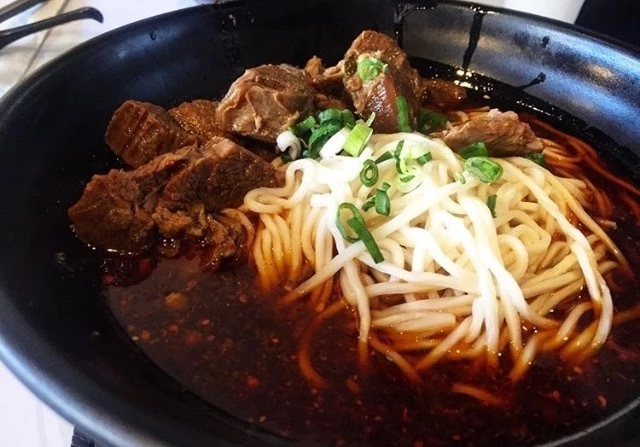 That Tony Xu managed to open a restaurant that might surpass his Chengdu Taste is a miracle in and of itself. There are few dishes that are more satisfying than Mian's zha jiang mian, and the hot and sour noodles are quite a treat. If soup is what you're looking for, then the spicy beef noodle soup fits the bill. The noodles are cooked just to the point of perfection, not too al dente and packing enough bite despite soaking in broth. As Xu's pedigree might suggest, this version of the dish packs much more heat than the ones you'll get at Pine & Crane or 101 Noodle Express. Don't drink too much of the broth, the chili oil will catch up to you. 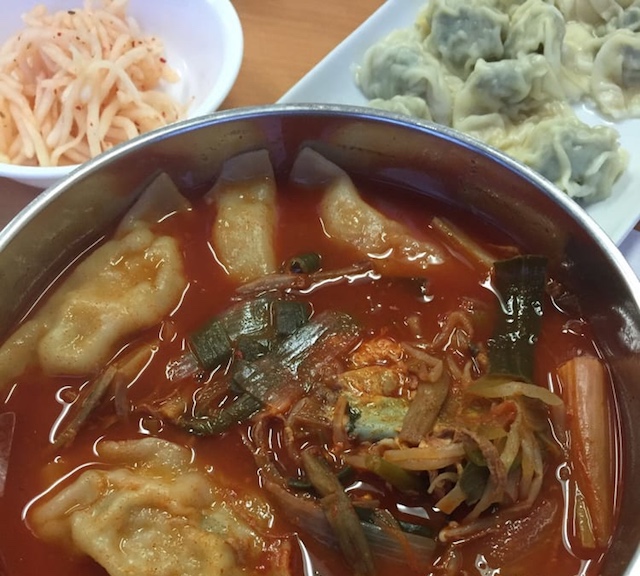 An underrated Koreatown spot in a busy strip mall, Naegohyang has its fans but doesn't seem to attract the crowds one might expect. Their loss, really. Buoyed by their excellent banchan, Naegohyang does superb noodles and soups, and their spicy beef dumpling soup is practically two meals in and of itself, packed with stringy beef, gigantic mandu, and with an egg scrambled in. When summer rolls around, we also recommend their kongguksu, cold wheat noodles in a nutty soy broth. 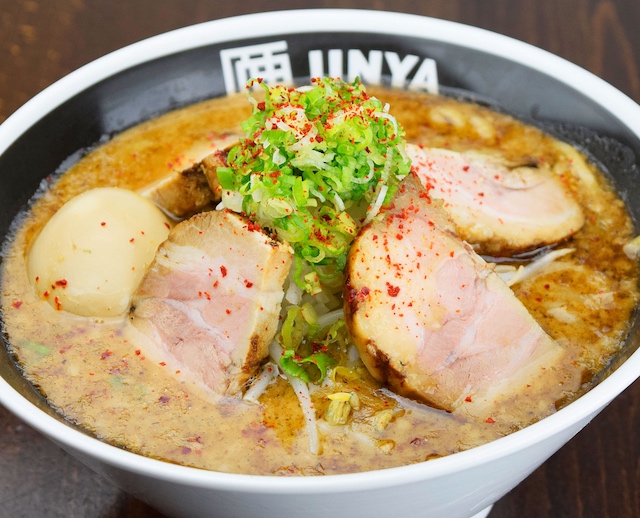 We'd be remiss if we didn't mention one of L.A.'s many excellent ramen options on this list. Practically any bowl of ramen will knock you out for the next few hours, but none are quite as heavy as Jinya's Cha Cha Cha, which is denoted on the menu as being "for garlic lovers." Merely mentioning the high quantity of garlic does the bowl a disservice, as it's also piled high with extra-thick slices of chashu and far more diced onions than you'd ever want (but will gladly accept). The broth is a funky mix of pork and fish, and there's so much fat that the globules cluster at the surface. Don't be a wuss, slurp it all down baby.

Jinya Ramen Bar has several locations across Los Angeles, including one coming soon to downtown L.A.