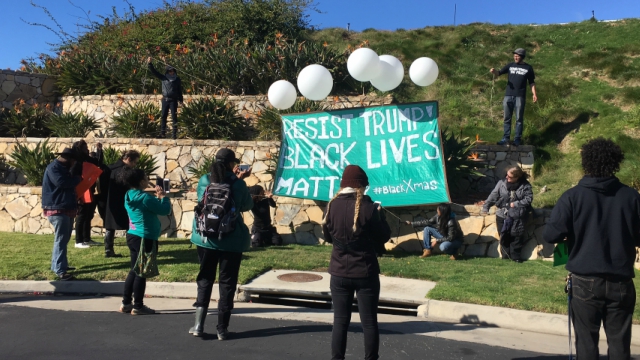 At around 9:30 a.m., the protesters walked passed the golf course and straight into the main clubhouse. They entered the dining hall and began singing “Protest Carols”, or classic Christmas carols re-worded with mainly anti-Trump lyrics, to the patrons.

A source present at the scene told LAist that the majority of brunchers supported the Black Lives Matter carolers and clapped, though a few grew angry.

No representatives of the golf course interrupted the protest.

The Trump National Golf Course noted that they were unable to comment on the event.

After some 15 minutes of caroling, the protesters left the clubhouse and were met with Sheriff's deputies out on the driveway. A representative for the Los Angeles Sheriff's Department told LAist that he did not have any information on the action or the department's response. The source at the scene added that some legal representatives from the National Lawyers Guild may have been present as a few individuals with yellow NLG hats were spotted. The NLG was unable to be reached for confirmation.

Photos from protest outside of #DonaldTrump's Rancho PV golf course in California. pic.twitter.com/jciv3WCFjA

According to the source, the protesters continued to demonstrate around the entrance to the golf club, but the group had mainly finished their planned actions by 1 p.m.