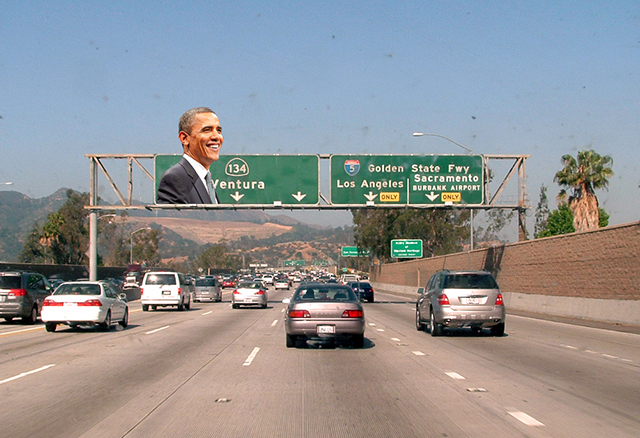 Yes, we know the stretch that would be renamed doesn't include this part. Sorry. (Base photo via Wikimedia Commons, President Obama photo via Twitter)

If one California state senator has his way, a portion of the 134 freeway could soon be renamed for President Barack Obama.

State Senator Anthony Portantino introduced a resolution this week that would rename the stretch of the 134 between Interstate 210 in Pasadena and State Route 2 in Glendale for Obama, according to CBS 2. That part of the 134 freeway goes through Eagle Rock, where the president attended Occidental College from 1979 to 1981 (he transferred to Columbia in 1981).

“California has a long history of designating our freeways as reminders of the accomplishments of important leaders who have shown character, strength and passion,” Portantino said in a statement, according to the L.A. Times. The section of State Route 118 in Simi Valley is named for former President Ronald Reagan, and a portion of Route 90 in Yorba Linda is named in honor of former President Richard Nixon.

The L.A. Times reports that the freeway dedication idea was spurred by a ceremony held last week where the city of Pasadena commemorated Obama's college apartment with a plaque. Portantino told the Times that community activists at the ceremony came up with the idea and shared it with him. "If someone comes up with a good idea, I'm going to run with it," he said.