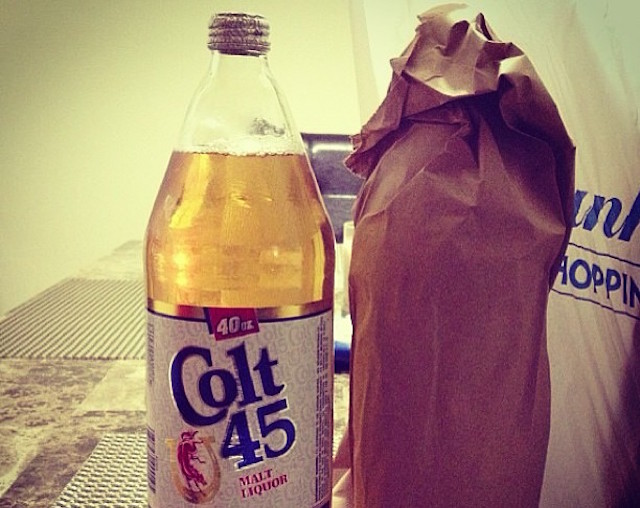 Note: this story has been updated with comments from Saint Felix owner John Arakaki.

Ever wanted that corner liquor store experience without leaving the comfort of your trendy Hollywood gastropub?

At Hollywood and West Hollywood's Saint Felix you can find all the usual suspects of semi-respectable beer lists: Peroni, Ballast Point Sculpin, Guinness and Blue Moon, to name a few. It won't impress any snobs, but there's something for everyone.

But once you get to the bottom of the list you'll find something... unusual. You can get a 40 oz. bottle of Colt 45 for the hefty price of $15. That's right, it's twice as much as any beer on the list and five-times what you'll pay from the store down the street. Oh, and did we mention that it comes in a brown paper bag? That's one expensive bag:

The drink has firmly entrenched itself as a part of American popular culture, having been the subject of many rap lyrics, as well as an ad campaign by a beloved Star Wars actor (at the West Hollywood location, a velvet portrait of Billy Dee Williams hangs on the wall):

Unfortunately, the cheap malt liquor—especially in the characteristic brown paper bag that's used to hide the drink—conjures images of inner-city poverty and alcoholism. Selling it as an item, and the crazy markup, can come off pretty insensitive.

But Saint Felix owner John Arakaki says the critics have gotten it all wrong. "We're not gentrifying anything—that's not even the right word," he told LAist. "When I was a kid growing up in Cleveland and going to Ohio State, we loved Colt 45 because of the Billy Dee Williams commercials." In fact, he says the velvet portrait of Williams at the bar's WeHo location was a gift from Pabst Brewing Company.

"It's not that we're patronizing or mocking... it's just a fun nostalgic memory of me and my friends."

As for the price, Arakaki says he's not gouging. "It's three beers and four ounces, and the high-alcohol content of malt liquor is more than a regular beer," he explains. "If you're drinking a Colt 45, you're committed to it for the night. We're not overpriced, we're priced according to the neighborhood."

According to server Mel Tugal at Saint Felix's Hollywood location, the bar has been serving the Colt 45 since they opened five years ago, and it has been a staple on their menu. Despite the markup and the negative connotations, Tugal told LAist that it is a very popular item and that there haven't been any customers that have complained about it. "People come in and see that and say, 'I wanna get that!'"